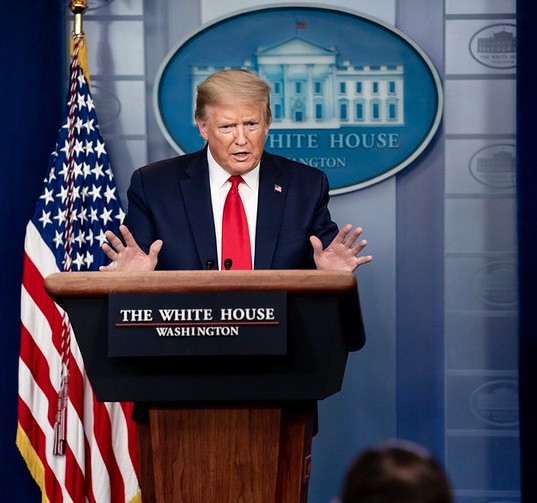 The Freedom From Religion Foundation is calling out the White House for demanding that churches must “reopen” and for threatening to “override the governors” who continue shutdowns affecting churches.

Late Friday, May 22, on the eve of the Memorial Day weekend, President Trump delivered an unscheduled announcement declaring houses of worship “essential.” His short statement ended with this pandering conclusion: “In America, we need more prayer, not less.”

As news commentators quickly noted, Trump does not have the power to override stay-at-home orders by governors, unless he takes states to court. This is a possibility, given that Attorney General William Barr made his own shameful announcement in late April signaling Justice Department support for church gatherings during the pandemic.

Observers also pointed out the obvious: that Trump is playing to his base, with more than 80 percent of evangelicals and fundamentalists voting for him in 2016. He fails to notice the irony that he may be endangering the health and lives of some of his supporters by urging them to congregate in the midst of a pandemic.

Shutdowns affect churches, synagogues, mosques and temples in less than half the states, and in many of those states, churches have been given broader rights to gather than similarly situated public gatherings. Yet, as FFRF’s analysis shows, there have been lawsuits filed in at least 19 states by churches or churchgoers demanding to lift COVID-19 precautions.

Trump’s announcement has given succor to more than 1,200 California pastors who say they will open their churches to celebrate the Pentecost next Sunday and are challenging Gov. Gavin Newsom’s executive order. Lutherans and Catholics who’ve promised to defy Minnesota Gov. Tim Walz’s orders and hold in-person worship also applauded Trump’s comments. They are being represented by the Becket Fund, a Catholic ultraconservative legal firm whose position is clearly not embraced by all Roman Catholic dioceses. A Catholic church in Houston that reopened on May 2 had to close after five leaders tested positive for COVID-19 and another priest died of a pneumonia diagnosis.

The Trump administration has repeatedly pandered to the Religious Right during this pandemic. The Centers for Disease Control and Prevention guidelines that included deferentially worded suggestions for churches to stay safe were held up, thanks to a Christian Nationalist ideologue in the Department of Health and Human Services, then further watered down when finally released.

Yet many religious leaders admirably have embraced safety guidelines. “No one is depriving us of our religious freedom,” says Bishop Elizabeth A. Eaton, the presiding prelate of the Evangelical Lutheran Church in America. And an open letter has been published in the Washington Post by two evangelicals to Trump, titled: “Dear Trump, your call to allow all churches to reopen was dangerous. Sincerely, two evangelicals.”

A said has found that 66 percent do not believe government orders prohibiting in-person religious services “violates freedom of religion.”

Paula White, who directs the White House faith office and is Trump’s “personal spiritual adviser,” has announced she is planning to host online-only Pentecost services at her Florida church. Even Robert Jeffress, Dallas pastor of a prominent megachurch, said the reopening of his church would be “data-driven, instead of date-driven.”

Trump’s announcement is just the latest instance of the nation’s current political leaders genuflecting before churches. Vice President Mike Pence in March urged Americans to donate to churches during his official briefings at the Coronavirus Task Force. Pence also exploited the Good Friday briefing to urge Christians to give to their local churches. Trump, in a Fox interview before Easter, asked: “Wouldn’t it be great to have all of the churches full? You’ll have packed churches all over our country. I think it’ll be a beautiful time.”

The president is wrong. What this nation needs is less prayer and more attention paid instead to science and medical experts.