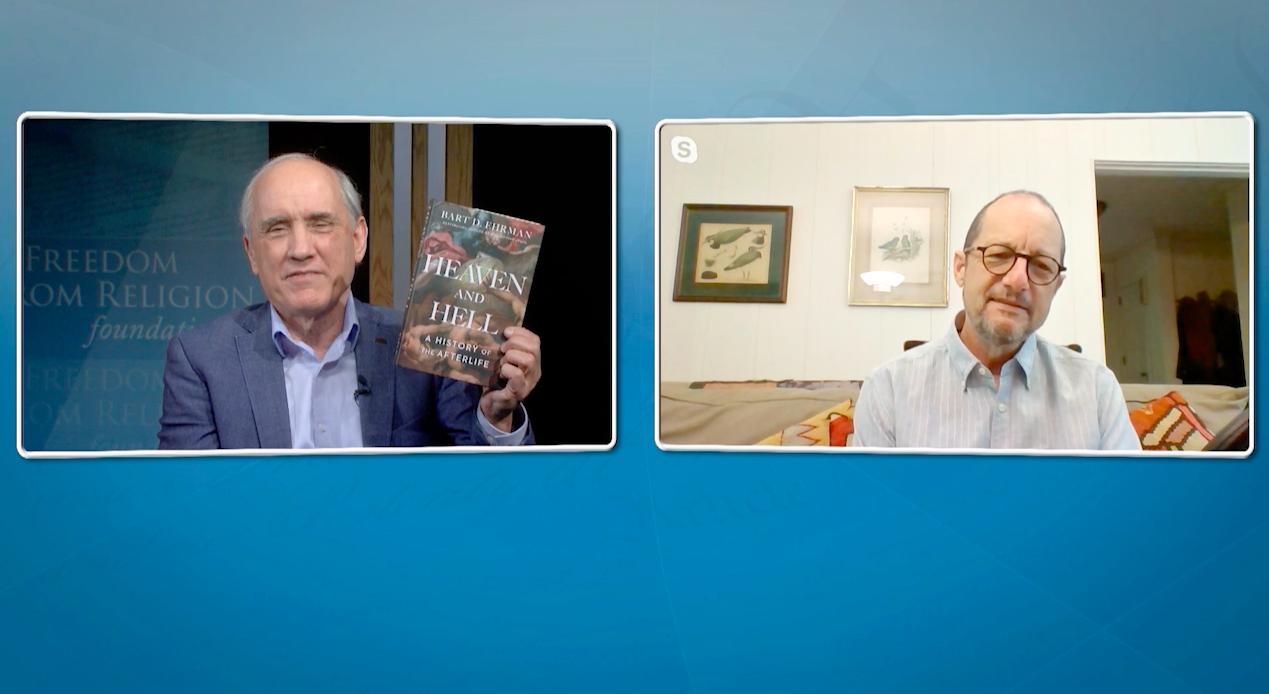 Ehrman, a professor of religious studies at the University of North Carolina at Chapel Hill, is a leading New Testament researcher. He has written and edited at least 30 books, including three college textbooks and six New York Times bestsellers, among them Misquoting Jesus, Jesus Interrupted, God’s Problem and Forged. Ehrman’s most recent book, released this spring, is titled Heaven And Hell: A History of the Afterlife.

Ehrman traces on the show the concepts of heaven and hell through history, including how the idea of hell developed from eternal death into eternal punishment: “Those who don’t go into the kingdom will be destroyed. They’ll be annihilated.”

You can watch this show on YouTube instantly by clicking here, or on your television in 12 cities Sunday morning (see listings below).

You will also enjoy catching up with previous episodes of “Freethought Matters.” The first guest in the new season was U.S. Rep. Jared Huffman, founder of the Congressional Freethought Caucus. Huffman’s appearance on the show made media waves due to his remarks about his colleague Rep. Liz Cheney’s dogmatic stance on the religious oath. Freethought icon Ron Reagan, world-renowned philosopher Daniel Dennett, acting legend Ed Asner and U.S. Reps. Jamie Raskin and Mark Pocan have recently appeared on the show. Most recently, the show has featured Katherine Stewart, the leading expert on Christian Nationalism in the United States. Guests on past seasons include comedian Julia Sweeney, former Planned Parenthood director Cecile Richards and a variety of freethought authors and activists. “Freethought Matters” has also shown two classic FFRF movies in recent weeks, the first film exposing religion, and the second one focusing on major state/church U.S. Supreme Court cases.

If you’d prefer to watch it on television, the cities where “Freethought Matters” broadcasts, along with the channels and timings, are listed below:

As an antidote to religion on the airwaves and Sunday morning sermonizing, the half-hour show airs Sunday mornings in 11 cities and Sunday evening in FFRF’s hometown of Madison, Wis. All previous programs are also available to view on FFRF’s YouTube channel.

The Freedom From Religion Foundation is the nation’s largest association of freethinkers (atheists and agnostics), with more than 31,000 members nationwide. FFRF also works as a watchdog guarding the constitutional separation between religion and government.