We need a National Day of Reason, not Prayer 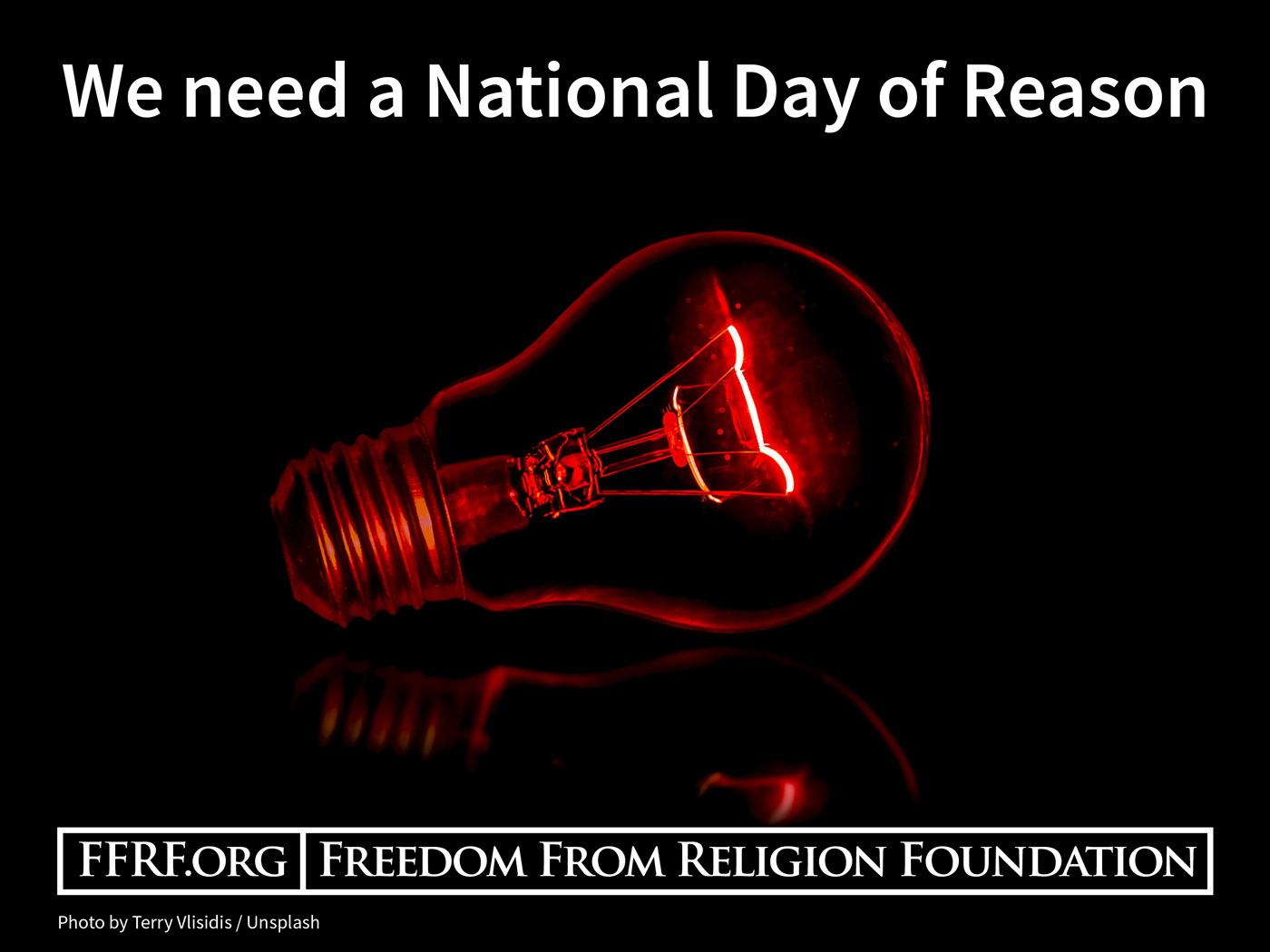 The congressionally sanctioned National Day of Prayer — this Thursday, May 7 — is more ludicrous than ever in a time of a pandemic. Fortunately, we now have a reasoned alternative.

House Resolution 947 has, laudably, been introduced in Congress by four members of the Congressional Freethought Caucus for the purpose of “expressing support for the designation of May 7, 2020, as a ‘National Day of Reason’ and recognizing the central importance of reason in the betterment of humanity.” (If you wish to urge your representative to support this resolution, please click here.)

A federal statute for an annual National Day of Prayer was first passed by Congress in 1952 at the direct suggestion of the Rev. Billy Graham, for the purpose of bringing “the Lord Jesus Christ” to the nation. The statute requires the president to issue a prayer proclamation on the first Thursday every May, calling on citizens to “turn to God in prayer and meditation at churches, in groups, and as individuals.” Since 1989, the National Day of Prayer Task Force, formerly housed in the fundamentalist Christian Focus on the Family’s headquarters, has composed draft proclamations with a yearly theme and scripture verse.

With all that is going on around us, 2020’s theme is little more than a bad joke, as can be discerned from a recent press release that the National Religious Broadcasters has issued. “This year’s theme, ‘Pray God’s Glory Across the Earth,’ is based on Habakkuk 2:14, which states, ‘For the earth will be filled with the knowledge of the glory of the Lord as the waters cover the sea,’” it states.

FFRF Co-President Dan Barker has shredded this notion in a recent blog.

“That unintentionally tragic-comic phrase was selected many months ago, before the glory of the virus was parading across the Earth, before the prickly irony would have been apparent,” wrote Barker. “And yet, people will continue to pray, hoping that maybe this time God will keep his promise.”

As Barker pointed out in his blog, we’ve already had a National Day of Prayer this year (on March 15, via a presidential tweet) with no discernible effect on the pandemic toll.

“A month later there were more than 30,000 known deaths,” Barker wrote. “A week after that it approached 50,000. The sad statistic will be greater by the time you read this. Christian families are not being spared. Prayer is making no difference. In fact, the reluctance of some pastors to close their sanctuaries — trusting that Jesus meant what he promised — most certainly has increased the risk of infection among churchgoers.”

Regardless, the evangelicals are going ahead with full enthusiasm in their observance of the National Day of Prayer — even if with a modified plan.

“Due to the coronavirus crisis and resulting economic shutdown, this year’s National Day of Prayer will not be canceled or postponed — but will look very different from years past,” states the press release from the National Religious Broadcasters. “This year, in addition to virtual events being held in communities across the nation such as the one being hosted by the Presidential Prayer Team, The National Day of Prayer National Observance Broadcast will take place on May 7 from 8 p.m. to 10 p.m. ET.”

The Freedom From Religion Foundation thanks the congressional sponsors of the “National Day of Reason” resolution — introduced by U.S. Rep. Jamie Raskin and co-sponsored by U.S. Reps. Jared Huffman, Eleanor Holmes Norton and Jerry McNerney — which eloquently reads (in part):

Whereas irrationality, magical thinking, and superstition have undermined the national effort to combat the COVID–19 pandemic, and reason is fundamental to creating an effective coordinated response to beat the virus involving the federal government, the states, and the scientific and medical communities;

Whereas America’s Founders insisted upon the primacy of reason and knowledge in public life, and drafted the Constitution to prevent official establishment of religion and to protect freedom of thought, speech, and inquiry in civil society; …

and Whereas, May 7, 2020, would be an appropriate date to designate as a “National Day of Reason”:

Now, therefore, be it resolved, that the House of Representatives — (1) supports the designation of a “National Day of Reason”; and (2) encourages all citizens, residents, and visitors to join in observing this day and focusing on the central importance of reason, critical thought, the scientific method, and free inquiry to resolving social problems and promoting the welfare of humankind.

Finally, here’s a resolution that all right-minded people can get behind — offering a rational way out of our current quandary. We need more reason and less prayer in the country; a National Day of Reason, not a National Day of Prayer.