The Freedom From Religion Foundation deplores the pandering remarks of Texas’ three highest officials in their responses to the horrific El Paso mass shooting.

Gov. Greg Abbott called for the usual mindless “thoughts and prayers” at a press conference on the shooting, also tweeting, “We ask God to bind up the wounds of all who’ve been harmed.” Abbott is a fierce defender of Second Amendment rights and infamously urged Texans to “pick up the pace” by buying more guns in 2015. But he has little regard for the First Amendment.

However, Lt. Gov. Dan Patrick, not one to shy away from Christian nationalism or politicizing a tragedy, topped Abbott. Patrick went on Fox & Friends, first to blame the shootings on video games, then on America’s secular Constitution. He hypocritically argued that mass shootings should not be politicized:

I look at, on Sunday morning, when most of your viewers right now, half of the country, are getting ready to go to church, and yet tomorrow, we won’t let our kids even pray in our schools. Um, we have to look at ourselves as a nation. Many factors that go into these shootings — many factors. And it’s not a time to politicize ...

This, of course, is a misrepresentation. Students may pray privately in our public schools; the government cannot impose prayer on a captive audience of schoolchildren. Patrick added a moment later:

. . . as long as we continue to only praise God and look at God on a Sunday morning, and kick him out of the town squares and our schools the other six days of the week, what do we expect? What do we expect? There’s no excuse for this.

There’s actually no excuse for using the El Paso mass shooting as a vehicle for theocratic grandstanding. Our Constitution says that public officials cannot use the machinery of the state to promote their personal religion. Patrick is claiming that not being able to use a government megaphone to spout scripture is the same as being kicked out of the town square.

Patrick concluded, “We all have to attack this because it’s not acceptable any more.” But his weapon of choice is religion. He absurdly claims that thoughts and prayers or compulsory prayer in schools is going to fix this problem.

By the way, this is not Patrick’s first time dragging his Christian nationalism into a mass shooting. After the Pulse nightclub massacre in June 2016, Patrick tweeted an image of a bible verse, blaming the victims of the shooting: “‘Do not be deceived: God cannot be mocked. A man reaps what he sows.’ Galatians 6:7” He later deleted the tweet. 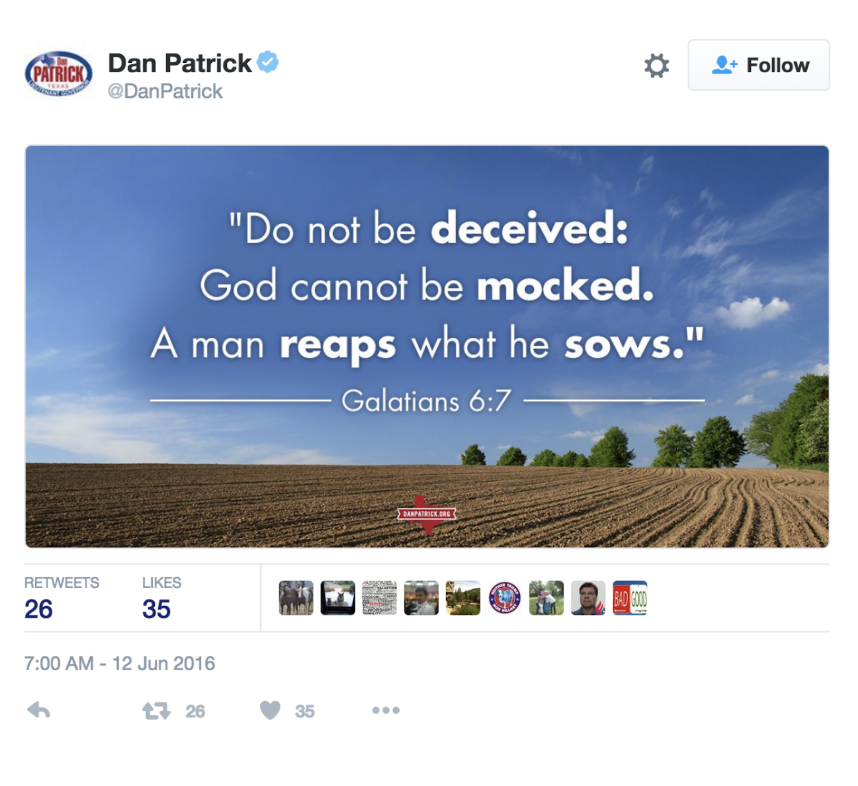 And it’s not just the governor’s office that is tripping over itself to prescribe religion as the solution to the gun violence epidemic.

On CNN, Texas Attorney General Ken Paxton, also a Christian nationalist, got in on the victim-blaming, too, saying “People need to just be aware and be ready to protect themselves.” He then asked for more “prayers.”

Instead of figuring out real solutions to the gun carnage, Texas top administrators have been busy elsewhere. Paxton has been working to align the Texas attorney general’s office with the Christian nationalist outfit known as First Liberty Institute and has defended Christian crosses on county courthouses. (Paxton, incidentally, has been indicted and “is awaiting trial on felony securities fraud charges.”)

As for the governor, he has been so busy between censoring FFRF displays of the Bill of Rights and signing an absurd law to protect Chick-fil-A’s religion (lifted and modified from the Christian nationalist Project Blitz playbook) it’s almost a wonder he has time to propound meaningless thoughts and prayers.

As long as public officials continue to urge prayer — and they always mean Christian prayer — FFRF will continue to call them out for failing to provide real solutions.