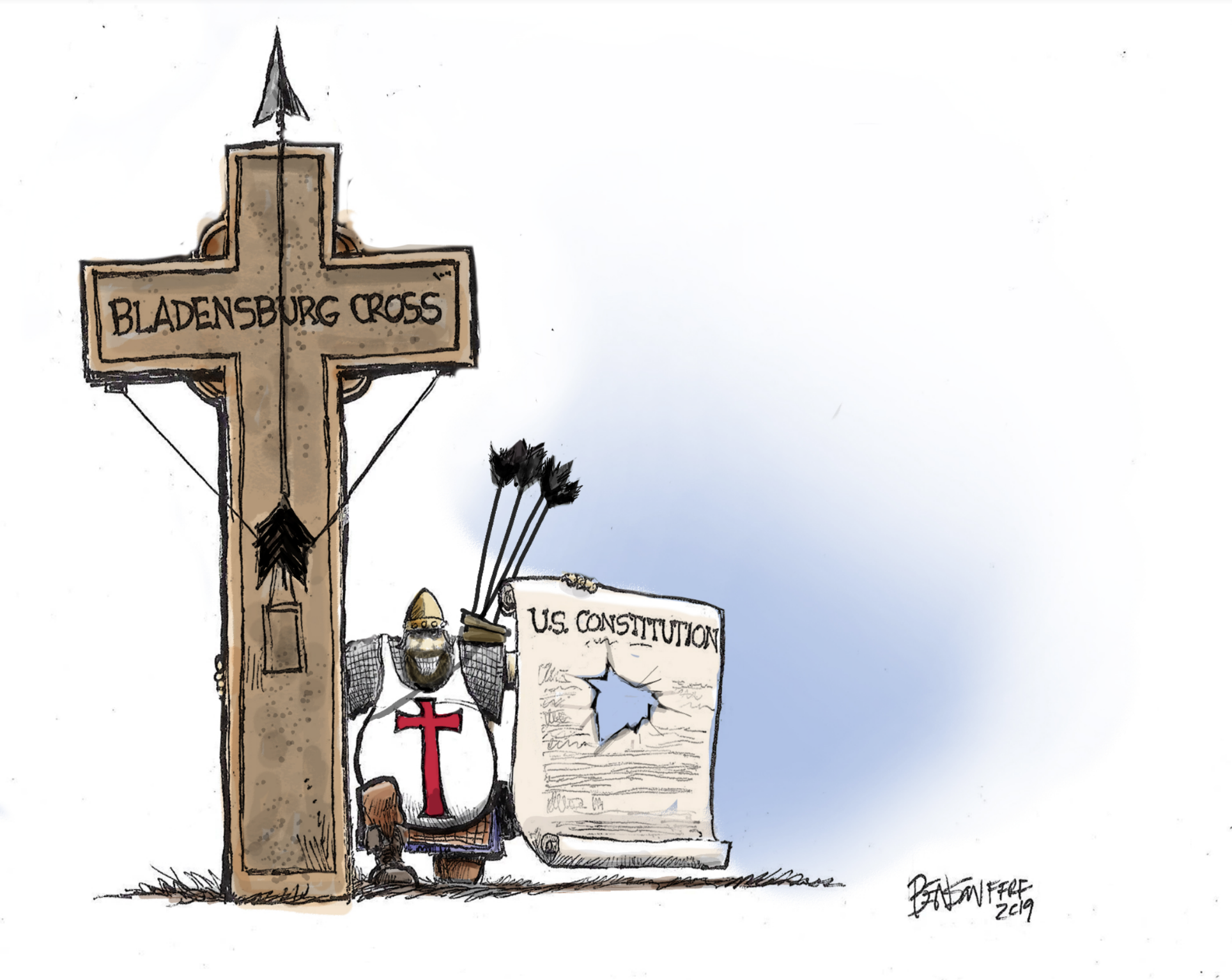 It should have been an easy call, but the U.S. Supreme Court blew it. The government-owned, government-maintained, 40-foot-tall Christian cross dominating the landscape in Bladensburg, Md., does not violate the First Amendment, seven justices inexcusably decided today.

One would expect to find a Christian cross — the pre-eminent symbol of Christianity — on government property in a Christian theocracy, not in a country that was first among nations to separate

It should have been an easy call, but the U.S. Supreme Court blew it. The government-owned, government-maintained, 40-foot-tall Christian cross dominating the landscape in Bladensburg, Md., does not violate the First Amendment, seven justices inexcusably decided today.

One would expect to find a Christian cross — the pre-eminent symbol of Christianity — on government property in a Christian theocracy, not in a country that was first among nations to separate religion from government.

The decision was fractured into seven separate opinions, concurrences and dissents over 87 pages, with seven justices eventually voting in favor of the cross. The majority opinion written by Justice Samuel Alito and joined by four other justices, declares that the Bladensburg cross, originally erected on private ground to commemorate several World War I soldiers, does not violate the Establishment Clause of the First Amendment. Alito argues that World War I history, community and sacrifice can obscure the religious sentiment of the Christian symbol, changing the purposes of the monument over time.

Ominously, instead of focusing on legal principles, Alito looks to “history for guidance,” trotting out typical Religious Right examples — such as legislative prayer, the day of thanksgiving Washington declared (which the court erroneously called a “National Day of Prayer”), some religious language in the Northwest Ordinance, and George Washington’s Farewell Address’ “religion and morality.” The central test for determining these violations, known as the Lemon test, was set aside in favor of the argument from history, though not explicitly overturned by a majority of the justices.

“The passage of time gives rise to a strong presumption of constitutionality,” writes Alito.

In an elegant and thoughtful dissent joined by Justice Sonia Sotomayor, Justice Ruth Bader Ginsburg gets it right.

“Using the cross as a war memorial does not transform it into a secular symbol, as the Courts of Appeals have uniformly recognized,” the dissent states. “By maintaining the Peace Cross on a public highway, the [Maryland-National Capital Park and Planning] Commission elevates Christianity over other faiths, and religion over nonreligion.”

Ginsburg persuasively lays out how such public crosses alienate a large and fast-growing segment of the U.S. population.

“To non-Christians, nearly 30 percent of the population of the United States (Pew Research Center, America’s Changing Religious Landscape 4 (2015)), the state’s choice to display the cross on public buildings or spaces conveys a message of exclusion: It tells them they ‘are outsiders, not full members of the political community,’” she writes.

FFRF has been making this exact argument for years, using the same wording and statistics, and has met with success suing over religious symbols that treat non-Christians as outsiders.

Most disappointingly, Justices Stephen Breyer and Elena Kagan joined in a concurrence that Breyer took the lead in writing: “I have long maintained that there is no single formula for resolving Establishment Clause challenges.” The pair argued that the 40-foot-tall concrete cross now on public property “cannot reasonably be understood as ‘a government effort to favor a particular religious sect’ or to ‘promote religion over nonreligion.’”

It was a troubling sign that the Supreme Court even agreed to review the cross case because an appeals court had properly ruled the cross unconstitutional. “Watch out,” we had warned. The Freedom From Religion Foundation was aware, for instance, that Kavanaugh, the court’s newest justice, had dismissed the Jeffersonian metaphor describing a “wall of separation between state and church” as “wrong as a matter of law and history.”

As we wrote in February, “The constitutional wall of separation has long been chipped away at, bored through, tunneled under, climbed over. But it still stands.” The question is how much damage today’s ruling has inflicted on that revered wall?

The Supreme Court abandoned its sacred duty today: Its duty to uphold the secular principles in our Constitution. The justices seem to have forgotten that when they took their oath of office, they placed their hand on the bible and swore to uphold the Constitution — not the other way around. What a shameful legacy for the Roberts Court.