Equality wins in the House 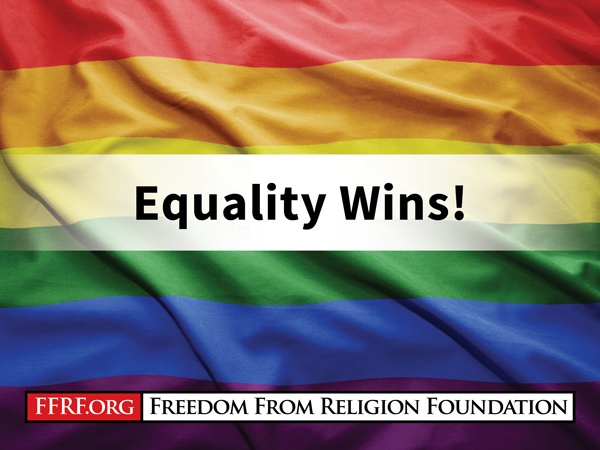 Amid a week in which women’s rights were viciously attacked in several states, equality won big in the U.S. House, which just today passed the Equality Act by a solid majority vote of 236-173. The bill would at long last amend the Civil Rights Act to “prohibit discrimination on the basis of sex, gender identity, and sexual orientation,” and more.

The Civil Rights Act already prohibits discrimination against particular classes of people, including bigotry based on religion, race, and sex, but, sadly, not the prejudice faced on the basis of sexual orientation or gender identity. This means it’s up to states, counties and cities to decide whether or not to specifically safeguard LGBTQ individuals as a class under their civil rights acts and ordinances.

Some states, like Colorado, site of the “gay wedding cake” case, protect LGBTQ citizens, but about 20 states do not. The Equality Act corrects this omission.

“Civil liberties should not depend on the state you live in,” says FFRF Co-President Annie Laurie Gaylor. “In a nation where our Constitution guarantees equal protection, and where ‘Equal justice under the law’ is etched on the building housing our Supreme Court, it’s simply wrong that LGBTQ individuals are denied federal civil rights.”

Asserts FFRF Co-President Dan Barker: “For too long, religion has imposed its Bronze Age immorality on public accommodations and civil rights laws. It’s time to protect all Americans, regardless of whatever slander the bible may contain about them.”

To become enacted, of course, the Equality Act must still pass the Senate, where the bill is expected to die.

The House vote nevertheless shows progress. But there is not progress for everyone in the House. Atheists and nonbelievers still have a long way to go. The House failed a major test on equality earlier this year when it fought to deny atheists equal opportunity to deliver opening invocations in federal court and won. Barker was denied this privilege because he’s an atheist. Atheists are still viewed by many in the House as second-class citizens.

Before the debate on the Equality Act, the chaplain who discriminated against Barker delivered his religious invocation. Rev. Patrick Conroy, a Roman Catholic priest, noticeably did not call for equality as a religious value, as some of the legislators did during the debate. He didn’t even mention equality. Which is disturbingly fitting.