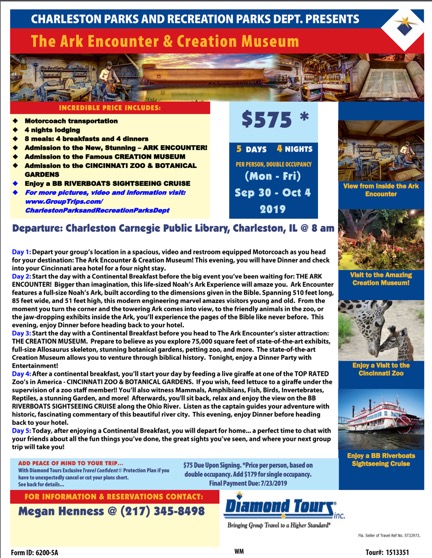 The Freedom From Religion Foundation is pleased to announce the cancellation of an Illinois city-sponsored religious tour.

FFRF contacted the city of Charleston, Ill., this Monday after receiving a report that the Parks and Recreation Department was hosting a five-day trip featuring visits to the Ark Encounter and the Creation Museum, scheduled for fall 2019.

It is unconstitutional for a city government to endorse the religious mission of the Ark Encounter or the Creation Museum by organizing, sponsoring or funding a trip to them, FFRF reminded Charleston officials.

“While organizing and encouraging citizens to attend recreational events is a laudable goal, advertising and organizing a trip to a Christian museum and theme park alienates those Charleston residents who are not Christian, including the 23 percent of the American population who are nonreligious,” wrote FFRF Staff Attorney Ryan Jayne in his letter to City Attorney Rachael Cunningham. “Surely there are appropriate secular activities, in addition to the planned trip to the Cincinnati Zoo and Botanical Gardens, that would not attempt to convert attendees to a particular religion.”

By Tuesday afternoon, Cunningham had alerted FFRF that the event had been cancelled. The trip has been removed from the city’s website and online registration portal.

FFRF commends the city for its swift resolution of this First Amendment violation.

“It’s laudable that the city took quick action to remedy this situation,” says FFRF Co-President Annie Laurie Gaylor. “Charleston has sent the message that they value and welcome all citizens, regardless of their religion.”

The Freedom From Religion Foundation is a national nonprofit organization with more than 32,000 members and several chapters across the country, including over 900 members in Illinois and a chapter in Chicago. FFRF’s purposes are to protect the constitutional principle of separation between church and state, and to educate the public on matters relating to nontheism.