Judge Brett Kavanaugh is working hard to avoid any firm stance on any substantive question in Day 2 of his Supreme Court confirmation hearings before the Senate Judiciary Committee. But in an exchange with his old buddy Sen. John Cornyn, R-Texas, Kavanaugh tacitly expressed his agreement that the landmark 2000 Supreme Court case, Santa Fe v. Doe, was incorrectly decided because it was hostile toward religion.

Cornyn and Kavanaugh were both involved in the Santa Fe case about imposition of prayer over school PA systems. Cornyn argued the case on behalf of prayer and Kavanaugh submitted an amicus brief in support of Cornyn’s position. Fortunately, they lost. The strong decision is critical to FFRF’s work and is regularly cited in our legal letters and briefs.

In another softball exchange with Sen. Ted Cruz, also R-Texas, he also expressed some alarming views on religion and the law.

In a departure from his typical reticence, Kavanaugh shared his view on other, more recent state-church cases, and his regressive view confirms FFRF’s repeated warnings: Kavanaugh is a wrecking ball aimed at the wall . . . the wall of separation between state and church. 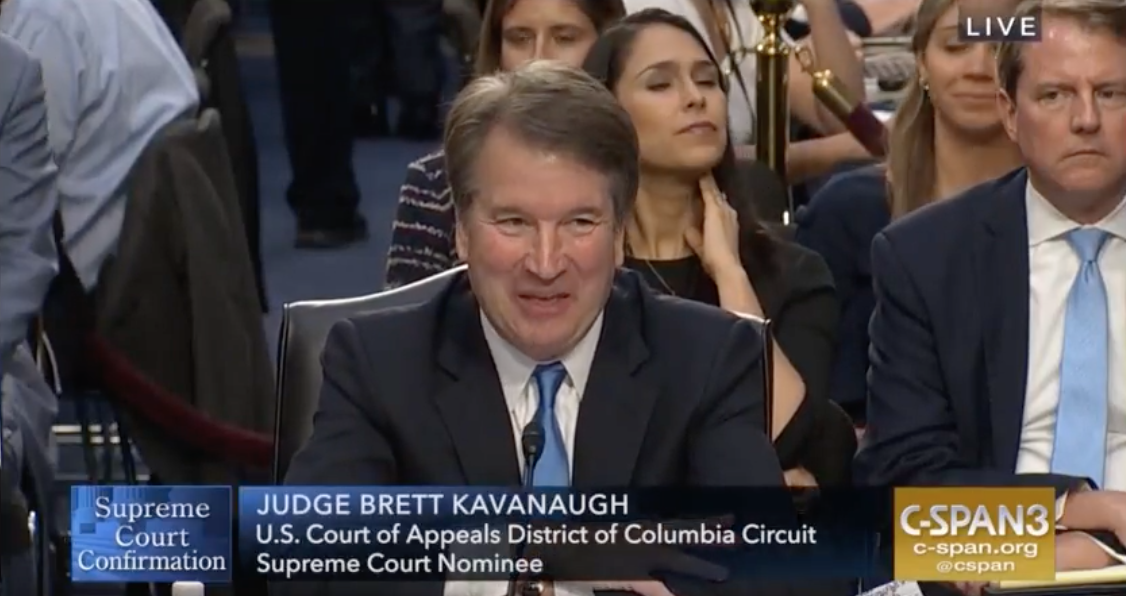 Call your senators today. FFRF’s action alert gives you all you need.

The case Cornyn and Kavanaugh were discussing involved the Santa Fe Independent School District, south of Houston, which had serious state-church problems in the 1990s. The schools organized prayer at school events, such as football games and graduations. A Catholic family and a Mormon family in the district challenged these prayers and the case was litigated for nearly a decade, eventually reaching the Supreme Court in 2000.

On behalf of then-U.S. Reps. Steve Largent and J.C. Watts, former professional football players, Kavanaugh wrote an amicus brief defending the use of the machinery of the state to impose prayers on students. Six justices on the Supreme Court, including Justice Anthony Kennedy, who Kavanaugh is seeking to replace, disagreed and in Santa Fe Independent School District v. Doe struck down the policy and prayers delivered via the public address system at school-scheduled, school-sponsored events, even if student-led.

Kavanaugh and Cornyn opined that this decision — stopping a perpetual prayer practice of a public school district — evidenced hostility toward religion. This is doubly wrong. First, the decision upheld students’ religious liberty, and was not hostile toward religion in any way. Second, Kavanaugh's brief attacked the religious families that brought the lawsuit and their lawyers as “absolutist,” “hostile to religion in any form,” as “campaigning for an “Orwellian world,” and seeking “the full extermination of private religious speech from the public schools” or attempting “to cleanse public schools throughout the country of private religious speech.”

Absolutist, hostile, Orwellian, full extermination, cleanse public schools — these charged words culminate with Kavanaugh invoking Nazis and arguing that, if the justices were to decide the case in favor of the plaintiffs (religious minorities), Christians would be relegated “to bottom-of-the-barrel status in our society — below socialists and Nazis and Klan members and panhandlers and ideological and political advocacy groups of all stripes.”

Perhaps the most striking aspect of this entire exchange is that Kavanaugh was so studiously quiet on every other substantive issue senators asked about: guns, abortion, health care, and whether or not the president can be indicted. But when it comes to protecting unconstitutional religious privilege, Kavanaugh felt comfortable — emboldened even — to give his unvarnished opinion, however contrary to established precedent it may be.

In his overly chummy exchange with Cruz, Kavanaugh discussed his view of religious liberty, and, to the uninitiated, it may have seemed like a measured discussion. For instance, he did mention nonbelievers — “no matter what god you worship or if you worship no god at all, you are protected as equally American” — and he mentioned his opinion in the Newdow case.

But that opinion is rife with hypocrisy and religious privilege, as our Director of Strategic Response Andrew Seidel explained in his article, “Hypocrisy, God, and the Originalism of Judge Kavanaugh.” Kavanaugh and Cruz also miss a big point in their religious freedom discussion: There is no freedom of religion without a government that is free from religion. That’s why the first clause of the First Amendment is about keeping religion out of the government, and vice versa, and religious freedom isn’t mentioned until the second clause. In that exchange, Kavanaugh also said that history and tradition can justify what would otherwise be violations of the First Amendment and state-church separation — a view that could be devastating to our secular future.

Further, Kavanaugh’s token mention of equal rights to secular Americans directly contradicts with his brief in the Santa Fe case, where he called those who stand up for secular values “absolutists” who were “campaigning for an Orwellian world.”

You must call your senators today. FFRF’s action alert gives you all you need.