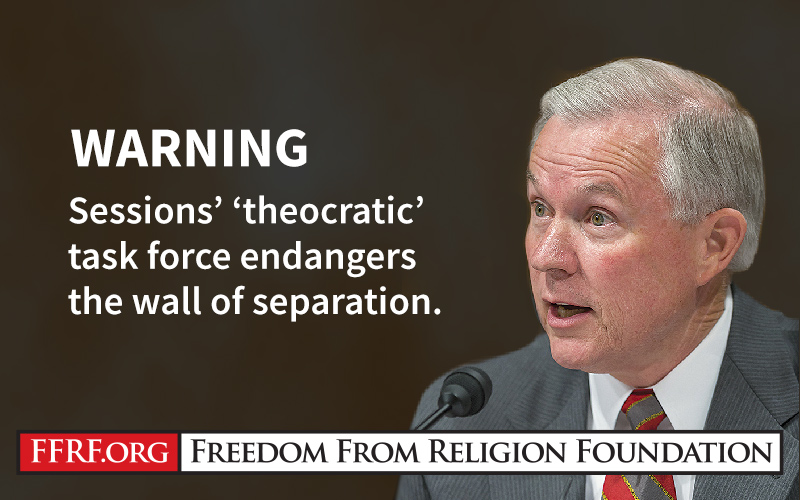 The task force will be charged with carrying out Sessions’ 20-page Principles of Religious Liberty memo, which Freedom From Religion Foundation sounded the alarm on when it was released last October. The memo signaled an acceleration of the Trump Administration’s partnership with the Religious Right to

The task force will be charged with carrying out Sessions’ 20-page Principles of Religious Liberty memo, which Freedom From Religion Foundation sounded the alarm on when it was released last October. The memo signaled an acceleration of the Trump Administration’s partnership with the Religious Right to redefine and weaponize the concept of “religious liberty” to allow religiously motivated discrimination and privilege Christianity.

During his announcement, Sessions, flanked by a Catholic archbishop and the Colorado baker who refused to bake a cake for a gay couple in the Supreme Court’s Masterpiece Cake case, portrayed religious Americans as victims who are treated like second-class citizens:

“Under this administration, the federal government is not just reacting—we are actively seeking, carefully, thoughtfully and lawfully, to accommodate people of faith. Religious Americans are no longer an afterthought.

“We will take potential burdens on one’s conscience into consideration before we issue regulations or new policies.

“And this Department of Justice is going to court across America to defend the rights of people of faith.”

After boasting that the Justice Department had filed a brief on behalf of Jack Phillips, the cake baker who denied equal accommodation under Colorado civil rights law to a gay couple, Sessions ironically added: “We are aggressively and appropriately enforcing our civil rights laws, our hate crimes laws, and laws protecting churches and faith groups.”

The “religious liberty” memo that the new task force will be carrying out has the primary goal of exempting Christians and other religionists from the rules and regulations of civil society, especially including rules that prevent discrimination against others.

Sessions also claimed during the announcement that he has “seen nuns ordered to buy contraceptives,” which is untrue. Sessions was referring to a ministry run by nuns, which argued that filling out a 5-line opt-out form in order to be exempted from the Obamacare contraceptive mandate was “a substantial burden on religious liberty.”

“The creation of this so-called Religious Liberty Task Force is an affront to the secular heritage of the United States,” adds FFRF Co-President Annie Laurie Gaylor. “It’s especially dangerous when combined with the Trump administration’s relentless packing of the judiciary with judges handpicked by the Federalist Society to legislate religious dogma into our laws and policies.”

During his announcement, Sessions also said “free exercise means a right to act—or to abstain from action.” In fact, citizens may believe as they like, but the right to act on those beliefs is by no means absolute. "Laws are made for the government of actions, and while they cannot interfere with mere religious belief and opinions, they may with practices," the Supreme Court ruled 130 years ago. The Court asked: "Suppose one believed that human sacrifices were a necessary part of religious worship; would it be seriously contended that the civil government under which he lived could not interfere to prevent a sacrifice?"

Sessions believes that Christians can violate the rights of others, including their rights to equal justice under the law, so long as those Christians are acting with “sincerely held religious beliefs.”

FFRF warned the Senate about confirming Sessions as attorney general, writing that he would tear down the wall of separation between state a church, which he called "a recent thing that is unhistorical and unconstitutional." Sessions was open about his belief that "free exercise also includes the freedom to act as one's religion demands, even if such actions might curtail the civil rights of others, or run contrary to the law."

“The Department of Justice doesn’t need a Religious Liberty Task Force, it needs a State-Church Separation Task Force,” says FFRF’s Director of Strategic Response Andrew L. Seidel. “Until we get a president and attorney general who understand the Constitution and are willing to defend it against religious privilege, the Freedom From Religion Foundation will continue to guard the wall of separation that is so vital to our secular republic.”

FFRF urges lawmakers to stand up for the secular Constitution they have sworn to uphold by telling the Department of Justice, loudly and clearly, that the DOJ should be protecting the religious freedom of all Americans, rather than granting special privileges to largely fundamentalist Christians.