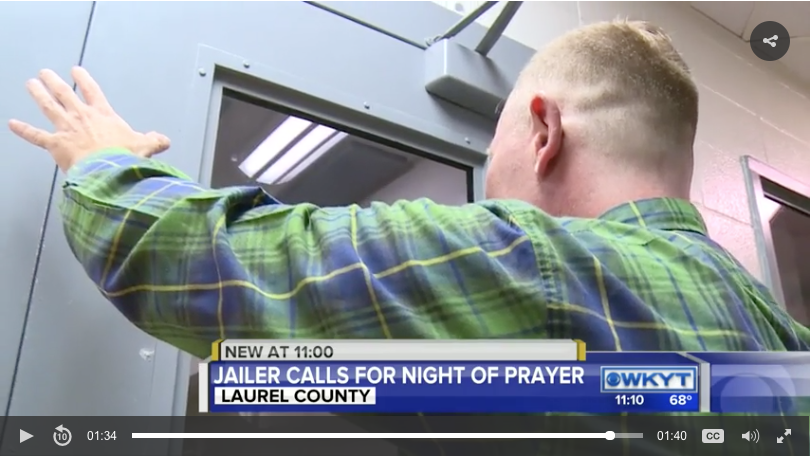 The Freedom From Religion Foundation is taking legal action against a Kentucky penal institution to make it comply with the law.

The Kentucky attorney general last month rendered an opinion that the Laurel County Correctional Center had to abide by FFRF's open record request filed in October. The correctional center has not made any move in that direction, so FFRF is asking a Kentucky circuit court to enforce the opinion.

FFRF's record request is regarding a "Night of Prayer" that Laurel County Jailer Jamie Mosley organized on Aug. 29 at the center. Laurel County citizens and churches were invited to the jail to pray for inmates, their families, their victims and jail staff. The correctional center erected a tent on the premises for the event. Christian ministers, members of the community and jail staff attended the event, and a local church choir performed. Inmates were escorted to the tent to interact with the crowd. Additionally, attendees, including community members and religious leaders, were permitted in the jail to form a "prayer chain."

On Oct. 6, FFRF made four specific requests for Laurel County Correctional Center records related to the Night of Prayer event and two specific requests for records related to substance abuse programming and religious programming. A few weeks later, the correctional center provided FFRF with its Policy and Procedure Guidelines for the past three years, as well as its substance abuse programming contracts. But it stated that it was withholding numerous documents based on a variety of exceptions set forth in Kentucky's state statutes. Mosley claimed that turning over certain records would render the institution vulnerable to a terrorist attack. He also cited two mutually exclusive exemptions: asserting that producing these records would be overly burdensome and that he is not in possession of the records at all.

On Nov. 17, FFRF asked the Kentucky attorney general to review the correctional center's denial of records. On Dec. 21, the attorney general decided that: The Laurel County Correctional Center had violated the Open Records Act; it subverted the intent of the act by commingling responsive and non-responsive documents; it infringed the act by requiring FFRF to retrieve responsive documents in person; and it failed to comply with a statutory requirement that a state agency respond to a record request within three days.

FFRF is asking for an award of incurred costs, including reasonable attorney's fees. Additionally, it is requesting statutory penalties of up to $25 per day from the date of the request to the date of production for each document that the Laurel County Correctional Center is required to produce in this action.

The Freedom From Religion Foundation is seeking information on behalf of its Kentucky membership, its Kentucky chapter, as well as more than 30,000 members throughout the United States. It works to uphold the constitutional principle of the separation of between state and church, and educates the public on matters relating to nontheism.

FFRF has filed its case in the Laurel County Circuit Court, with Michele Henry and Aaron Bentley of Craig Henry PLC as its counsels.