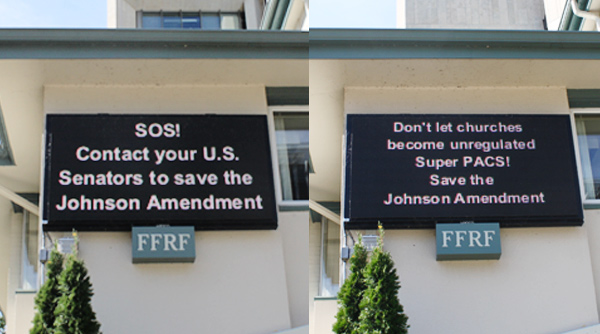 While the Freedom From Religion Foundation and over 700 of our members from around the country were assembling for FFRF's memorable and inspiring 40th annual convention last weekend in Madison, Wis., the Religious Right had a major legislative coup in the U.S. House.

Late Thursday afternoon, the pandering House passed a megabus budget package — the Fiscal Year 2018 Financial Services and General Government Appropriations bill. Included in the budget was a provision, Section 116, to prohibit the Internal Revenue Service from enforcing the Johnson Amendment as it applies to churches.

The Johnson Amendment currently applies equally to all 501(c)(3) nonprofits, not just churches, prohibiting them from using tax deductible donations for political purposes. But Provision 116 would place only churches, pastors and priests above the law. This budget amendment would exempt only churches and their leaders from conforming to the vital protection provided by the Johnson Amendment.

President Trump dishonestly claims that pastors are being "silenced." So untrue. Pastors, including many prominent Religious Right leaders and mega-church ministers, may and do endorse political candidates as individuals. But they may not and should not use tax-exempt funds for political purposes. They may simply not endorse from the pulpit, tell their congregations who to vote for or who not to vote for, distribute campaign literature through tax-exempt coffers or otherwise use their tax-exempt funding for direct political purposes. (If they wish to do so, they are of course free to forfeit the taxpayer subsidy of tax exemption.)

If churches are allowed to politick from the pulpit while retaining tax exemption, they will become unregulated super PACs. Congress will create a new category of "dark money." That's because churches are financial black holes, which, unlike every other 501(c)(3) are not required to report annual financial returns to the IRS. All other 501(c)(3)s must prove to the IRS on an annual basis that they deserve to retain their exalted status as tax-deductible groups by showing what money comes in and giving evidence they are spending these funds for their tax-exempt purposes.

As our national action alert reminds the nation, an overwhelming percentage of Americans do not favor repealing the Johnson Amendment. They believe it's inappropriate for pastors to endorse candidates in church. Only 1 in 4 Democrats and 1 in 3 Republicans supports Trump in favoring political action by churches.

Trump has been unsuccessful in getting Congress to repeal the Johnson Amendment as it applies to churches. That's why he has hidden this provision in the budget bill, a sneaky way to pull something over on the American people and to pass disastrous legislation without open debate.

FFRF is currently suing Trump over a May executive order, which he claims let's churches engage in politicking. We have successfully sued the IRS in the past to force them to enforce their own provisions. This budget item would explicitly deny funding to the IRS to continue to enforce it.

Take action today to save the Johnson Amendment.

Our secular republic hangs in the balance.