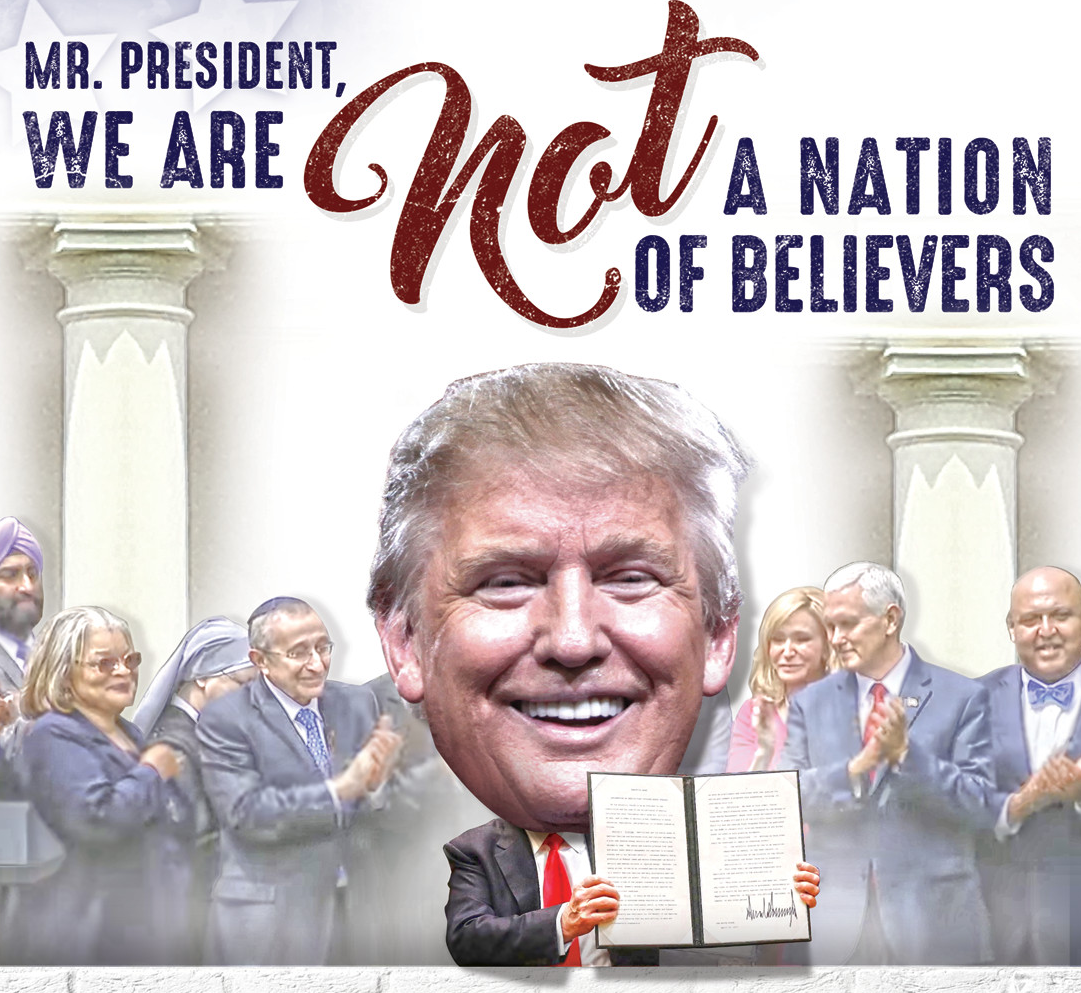 President Trump has failed to fulfill his promise to “get rid of and totally destroy the Johnson Amendment,” according to an admission filed in court by his own lawyers.

President Trump has failed to fulfill his promise to “get rid of and totally destroy the Johnson Amendment,” according to an admission filed in court by his own lawyers.

The Department of Justice filing comes in response to the Freedom From Religion Foundation’s federal lawsuit challenging Trump’s executive order on religious freedom. As has been reported by The Washington Post, Politico, and others, Trump’s attorneys admitted, “The order does not exempt religious organizations from the restrictions on political campaign activity applicable to all tax-exempt organizations.”

FFRF sued Trump and the IRS on May 4, the day he signed the trouble-making order. FFRF pointed out there was a disconnect between the language in the order and Trump’s inflated claims in his announcement about the order’s effect. Trump repeatedly boasted that he was getting rid of the Johnson Amendment and that doing so would be his “greatest contribution to Christianity.”

Trump claimed that his executive order allowed tax-exempt churches to politick from the pulpit. On June 8, he told the evangelicals in the crowd at the the Faith and Freedom coalition:

That executive order also followed on one of my campaign promises to so many of you, to stop the Johnson Amendment from interfering with your First Amendment Rights. (APPLAUSE) That was my promise. This executive order directs the IRS not to unfairly target churches and religious organizations for political speech. So the people that you most respect can now feel free to speak to you, like my friends sitting right over here. I can now hear them, and they’re unimpeded.

So I just want to congratulate everybody in this room, because that was a big deal and it was a very important thing for me to do for you.

Trump subsequently doubled down on his earlier remarks, encouraging church leaders to engage in explicit political advocacy with voices he preferentially wants to be heard. Trump told Christian Broadcasting Network founder Pat Robertson in a July 12 interview that he had signed an order to empower religious leaders to speak up politically:

We’ve really helped because I’ve gotten rid of the Johnson Amendment, now we are going to try to get rid of it permanently in Congress, but I signed an executive order so that now people like you that I want to hear from, ministers and preachers and rabbis and whoever it may be, they can speak. You know, you couldn’t speak politically before; now you can.  And I want to hear from you and others that we like.

According to Trump’s lawyers, however, the order was not technically such a big deal. It was, to borrow a phrase from the Trump White House, a “big nothing burger,” from a legal standpoint.  Put more simply, it appears Trump didn’t understand his own executive order. His religious freedom order was all pomp and no substance — an admission we now have in court documents, thanks to FFRF.

The filings by Trump’s DOJ attorneys admit that Trump’s bombast about the Johnson Amendment is nothing more than hot air, intended to promote and encourage church politicking, but without the force and effect of law. Significantly, the court filings prove that Trump did not delivered on his destructive campaign promise, which was solely designed to reward white evangelicals, 81 percent of whom voted for Trump and a group that disproportionately approves of ending the Johnson Amendment. Polls find that 79 percent of American support the Johnson Amendment).

The Washington Post, in an article cheekily titled, “Critics said Trump’s ‘religious liberty’ order does nothing. The administration’s lawyers seem to agree,” explains: “Department of Justice attorneys defending the order argued in court that it doesn’t change any existing laws or alter any policies to benefit churches or clergy.”

The Post further notes: “Religious groups were irked by the government’s tepid defense.”
While Trump has tried to convince the Religious Right he has delivered on a big promise, in fact he has simply been encouraging lawlessness while attempting to chill enforcement of the law by the IRS.

The Becket Fund, which has brought a host of bad lawsuits trying to redefine religious liberty, was miffed at the government’s response to FFRF’s lawsuit. “We're now at the end of August, and DOJ's actions in court are still not following through on the president's promises from the Rose Garden in May, or the campaign trail last year,” said Montse Alvarado, the group’s executive director in a story at The Christian Post.

David Lane, a Christian nationalist who runs the American Renewal Project, “said the court filing shows the limitations of Trump’s executive order. ‘In the long run it doesn’t do anything for us because in the end [the Johnson Amendment is] a law passed by Congress,’” according to The Hill.

FFRF had predicted this possibility. “If Trump’s lawyers want to march into that courtroom and tell the world and President Trump that this order doesn’t do anything, we would consider that a win,” FFRF Staff Attorney Andrew Seidel, who worked on the complaint, explained to the Daily Beast shortly after the suit was filed.

“We remain dissatisfied that Trump’s executive order specifically singles out churches as above the law and does not address the rights of other 501(c)(3) nonprofits,” says FFRF Co-President Dan Barker. “Unfortunately, Trump continues to invoke his order to falsely claim the Johnson Amendment discriminates against churches, and to encourage pastors to endorse from the pulpit.”

DOJ’s concession of the legal impotence of his executive order certainly does not end the danger. A budget item would defund the IRS’s ability to enforce the church politicking rule (Section 116 of the Financial Services and General Government Appropriations Bill).

The push to undo the Johnson Amendment goes against public opinion. Recently, Americans United delivered more than 4,000 letters from faith leaders from around the country to Congress — all urging that the rule remain in place. In April, a letter signed by nearly 4,500 nonprofit organizations, including FFRF, urged Congress to protect the Johnson Amendment.

FFRF notes the Johnson Amendment has broad nonpartisan support, with only 1 in 4 Democrats and 1 in 3 Republicans supporting the idea of churches endorsing political candidates.

Given that the Justice Department has filed documents admitting that the order does not do the things that Trump has claimed, FFRF is pleased to take credit for forcing its hand, but will remain vigilant as watchers on the wall . . . of separation between state and church. In light of the recent legal developments, FFRF is assessing its next steps.