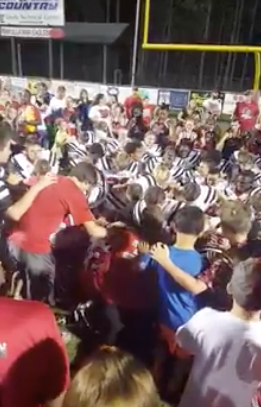 A Florida school district has taken strong action against a football coach after the Freedom From Religion Foundation alerted it to his prayers with students.

Wakulla Middle School Head Coach Eddie Metcalf was regularly guiding his team in pre-game prayers. He had been filmed doing this at an October game (from which the accompanying image is taken).

Seidel had added that the legal guidelines are actually even more restrictive.

"Public school coaches must refrain not only from leading prayer themselves, but also from participating in students' prayers," he pointed out. "It is unconstitutional for public school employees to participate in the religious activities of their students."

Coach Metcalf's conduct represents the school and team when he acts in his official role as the head coach. Therefore, he can't lead his team in prayer, FFRF reminded the school district.

"Immediately upon learning of the incident, the Wakulla County School Board commenced an investigation," the school district's legal counsel recently replied. "Additionally, the board has taken appropriate remedial measures, including meeting with Coach Metcalf and other coaching staff to reaffirm the board's policy and practice on this issue. Furthermore, Coach Metcalf will be subject to appropriate disciplinary action. Additionally, a mandatory refresher training will be held on the next professional development day."

"The school district had a no-nonsense reaction on receiving our complaint," says FFRF Co-President Annie Laurie Gaylor. "We really appreciate that the Wakulla County School Board takes the Constitution so seriously."

The Freedom From Religion Foundation is a national organization dedicated to the separation of state and church, with more than 24,000 nonreligious members all over the country, including 1,200-plus and a chapter in Florida.