New Analysis: 26 million voters with no religion could turn out on Nov. 8, dwarfing previous records 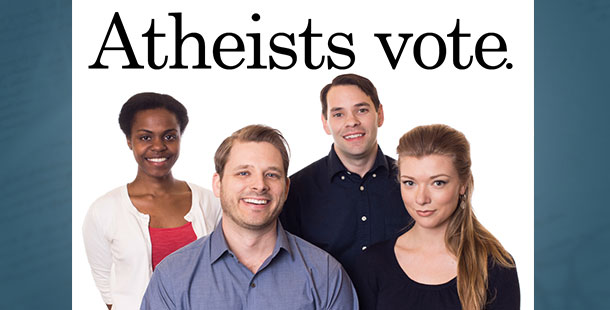 MADISON, WIS. – More than 26 million voters with no religion could turn out on Nov. 8, dwarfing previous records and providing the power to sway the direction of the country for the first time in history, according to a new analysis from the Freedom From Religion Foundation (FFRF).

The ranks of atheists, agnostics and those with no religious affiliation—"the Nones"—have increased by 19 million since Barack Obama was first elected president, according to Pew Research, making them the fastest growing "religious" group in America. In 2004, the Nones comprised just 16 percent of all American adults, but have now grown to represent a quarter of all adults and a third of Millennials.

Despite their size, the Nones have been underrepresented at the ballot box. According to the Public Religion Research Institute (PRRI), religiously unaffiliated voters comprised just 12 percent of all voters in the 2012 presidential election.

However, their participation is set to spike in 2016, according to FFRF's new analysis of data on religious affiliation and voting participation, drawn from numerous sources.

The most recent popular vote projections by FiveThirtyEight.com show Democrat Hillary Clinton with a lead (49 percent) over Republican Donald Trump (43 percent), with the remainder of voters supporting third-party candidates.

Using the 2012 popular vote (128.6 million) as a base, we can project that more than 63 million votes would go to Clinton and approximately 55 million would go to Trump if the election were held today.

How would that break down by religious affiliation? Approximately 30 percent of Clinton's supporters are religiously unaffiliated and 13 percent of Trump supporters meet that definition, according to the Public Religion Research Institute.

"This election could be a flashpoint, where secular voters finally eclipse other major religious groups in terms of turnout and influence," says Freedom From Religion Foundation Co-President Annie Laurie Gaylor. "It's time that candidates acknowledge our presence and commit to keeping religion out of government."

Earlier this year, FFRF launched its "I'm Secular and I Vote" campaign to mobilize voters across the country through national TV, billboard and bus campaign ads, featuring young Millennial voters. FFRF is also enlisting students on college campuses and launching a digital marketing campaign to reach voters online. Ninety-six percent of FFRF's membership is registered to vote, according to a member survey.

"The next president will have the power to determine the direction of the Supreme Court for a generation," says Gaylor. "We expect secular voters to come out in force and make their voices heard."

About Freedom From Religion Foundation:

Based in Madison, Wis., Freedom From Religion Foundation is a 501(c)(3) nonprofit educational charity, and the nation's largest association of freethinkers (atheists, agnostics). FFRF has been working since 1978 to keep religion and government separate.