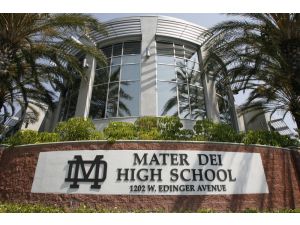 A California city council nixed a multimillion-dollar grant to a private religious school after the Freedom From Religion Foundation objected.

The Santa Ana City Council was considering a $2.5 million grant to Mater Dei High School, a Catholic institution, for construction of a new building and parking garage. FFRF called attention to the fact that the funding would have been a violation of the U.S. Constitution, as well as the California Constitution.

"The Establishment Clause of the First Amendment prohibits the government from supporting religious activities with public funds," FFRF Legal Fellow Ryan Jayne wrote to Santa Ana Mayor Miguel Pulido and City Council members. "The city of Santa Ana violates this principle when it funds the expansion of a private parochial school."

Jayne additionally detailed how the California Constitution prohibits such funding and urged the Santa Ana City Council not to disburse any money to the Mater Dei High School.

"Please be aware that the City Council agenda item referenced in the letter from Mr. Ryan Jayne has been removed," Daniel Soto from the city manager's office responded in an email. "City staff has not suggested that the item be placed back on any future City Council meeting agenda for consideration."

A city council member thanked FFRF for reporting the problem and expressed support for its position.

FFRF is elated at the city's about-face.

"We were dismayed that Santa Ana was possibly going to channel millions of taxpayer dollars to a sectarian religious entity," says FFRF Co-President Annie Laurie Gaylor. "We're glad that it saw the light."

The Freedom From Religion Foundation is dedicated to the separation of state and church, with nearly 24,000 nonreligious members all over the country, including more than 3,000 in California.

Photo under CC 3.0 by Gzamora1