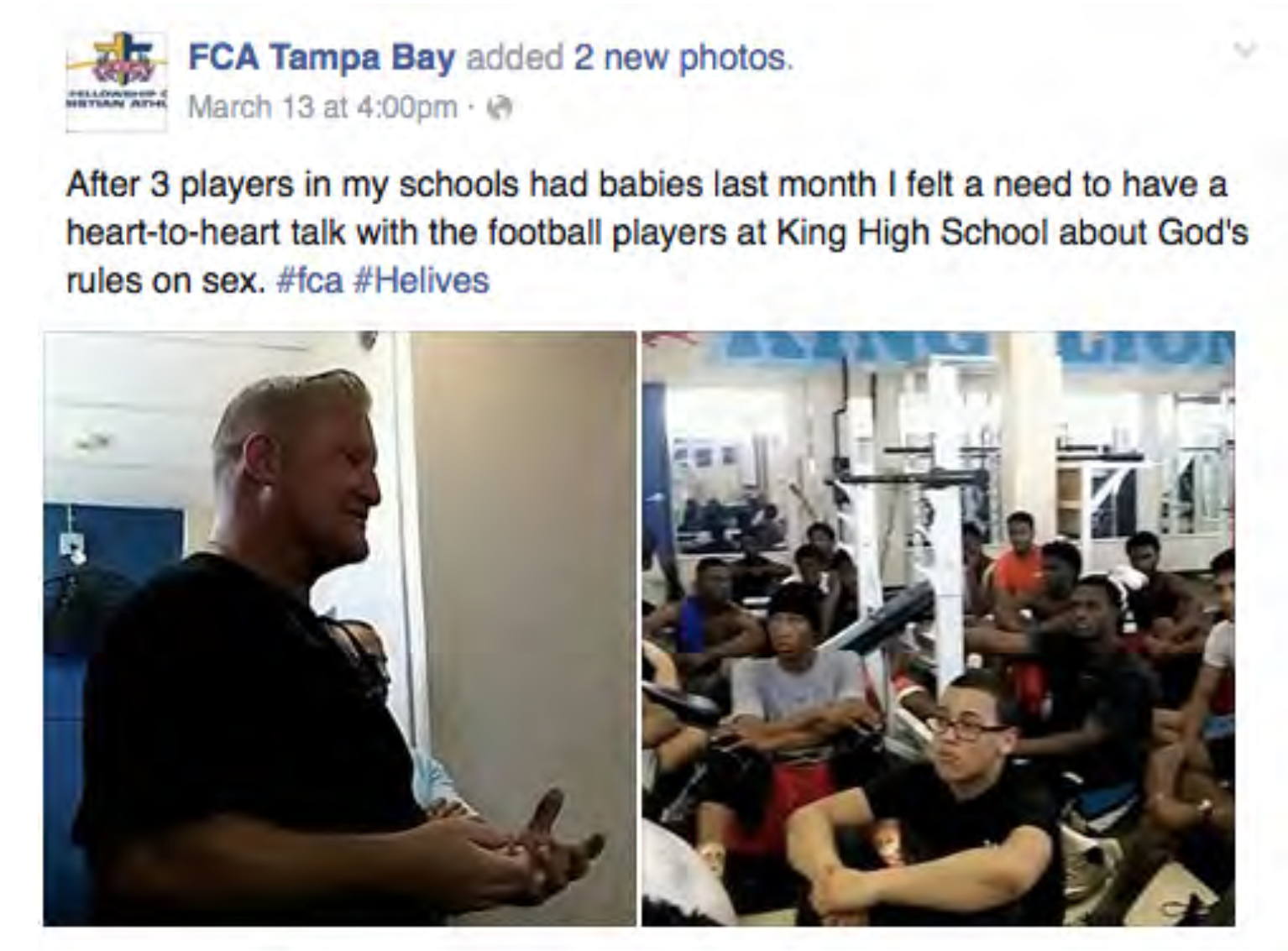 The Freedom From Religion Foundation has had an ex-con proselytizer barred from a Florida school district.

"After a national atheist organization issued a complaint, a Fellowship of Christian Athletes employee was permanently banned from Hillsborough County public schools, and all public high school sports coaches will be required to undergo special training next week," the Tampa Tribune reports.

Hillsborough County Public Schools had allowed a Fellowship of Christian Athletes representative, David Gaskill, who has a criminal record, to interact and proselytize with its students without restriction. Gaskill had been involved with the district's sports programs since at least 2014 and appeared to be the schools' sports chaplain.

"Public school sports teams cannot employ, even on a voluntary basis, a spiritual leader or chaplain for their teams because public schools may not advance or promote religion," FFRF Staff Attorney Andrew Seidel wrote to Jeff Eakins, superintendent of Hillsborough County Public Schools. "Furthermore, it is illegal for public school athletic coaches to lead or allow someone to lead their teams in prayer."

FFRF had asked that Gaskill be immediately disallowed from Hillsborough schools. There are serious privacy issues when schools let outside adults pose for "selfies" and pictures with students, including with their arms draped around shirtless students, FFRF contended. The schools also permitted Gaskill to meet with students in "intimate locker room" settings with no other adults present. Seidel's letter mentioned several examples and contained dozens of photos and posts that Gaskill had published on Facebook.

"This is one of the worst violations by the Fellowship of Christian Athletes that we've ever dealt with," Seidel said. "The schools have given Gaskill complete, unsupervised access to proselytize other people's children."

"We have suspended the Fellowship of Christian Athletes access to school campus, games and activities until they undergo a required training," Alberto Vasquez Matos, chief of staff for the Hillsborough County Public Schools system, wrote back to Seidel. "High school coaches will also attend a mandatory training outlining policies and procedures when working with community organizations and volunteers. Additionally, Mr. Gaskill will no longer be permitted on district campuses, games or practice."

"It's a matter of real concern that such a person was given free access to students," says FFRF Co-President Annie Laurie Gaylor. "We're satisfied that Hillsborough County Public Schools took immediate remedial action when we alerted the school district."

The Freedom From Religion Foundation is dedicated to the separation of state and church, with 23,700 nonreligious members nationwide, including more than 1,200 in Florida and a chapter in the state.