'Good news' even nonbelievers can appreciate 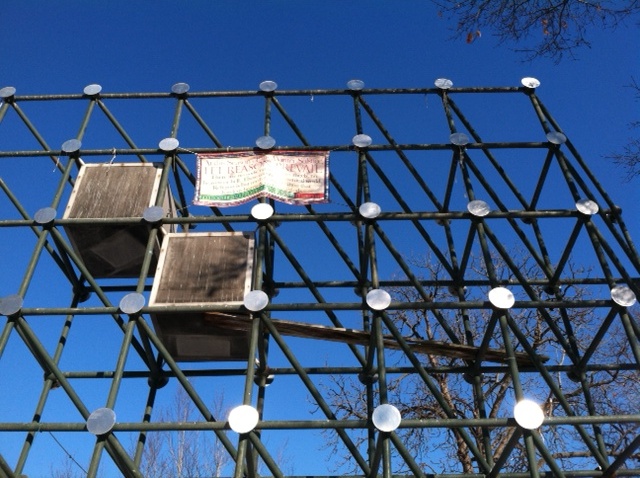 The Freedom From Religion Foundation's Winter Solstice banner is back up and will hang in the Wilkes-Barre Public Square for six more days — provided that it is not vandalized again.

"We are very pleased to hear that the city has rehung the banner and will be charging the vandal. We hope that his actions speak loudly to the type of discrimination nonbelievers tend to face in their communities," said FFRF Senior Staff Attorney Rebecca Markert.

FFRF's banner had been dangling from the public square sculpture for three weeks, ever since it was vandalized on Dec. 20 — one day after it was installed by city officials.

The vandal, who was identified as Joe McDonald, was caught by a local news station climbing 30 feet up the sculpture and cutting the cord to FFRF's banner. McDonald then placed an American flag next to the damaged banner.

Local FFRF member Justin Vacula immediately filed a police report and was told by an officer that McDonald will be charged with disorderly conduct and criminal mischief.

The 7½-by-3-foot banner states: “At this Season of the Winter Solstice, LET REASON PREVAIL. There are not gods, no devils, no angels, no heaven or hell. There is only our natural world. Religion is but myth & superstition that hardens hearts and enslaves minds.”

FFRF thanks Justin for all his help, including filing a police report and keeping FFRF well-informed.

FFRF solstice banner up in Wilkes-Barre