FFRF's Pennsylvania banner is down 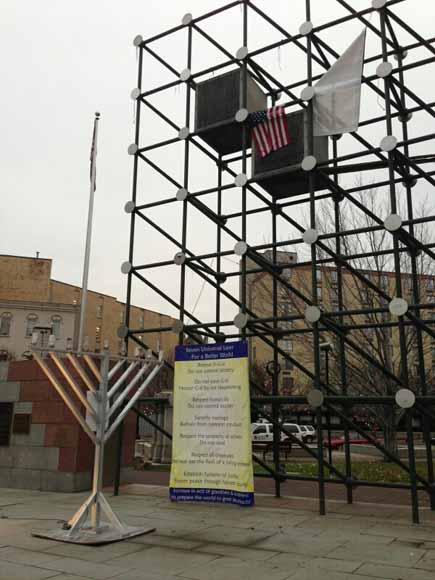 A man yesterday about 4 p.m. brazenly climbed a structure to cut the cord attaching the Freedom From Religion Foundation’s Winter Solstice banner in Public Square in Wilkes-Barre, Pa. The city, which requires that its workers must place displays, had just put the banner up Wednesday. FFRF paid a $50 fee and had a permit.

A film crew with WNEP 16, Scranton/Wilkes-Barre caught the crime, committed by a young man who identified himself as Joe McDonald, who climbed about 30 feet up the sculpture, cut two wires holding one side of the banner, and placed an American flag. View the news story here.

FFRF placed the sign in response to a very large menorah and prominent religious banner planted in Public Square. FFRF student member Justin Vacula had notified FFRF about the religious displays, and oversaw placement of the banner.

“No messages, religious or irreligious, should be placed in Public Square,” Justin told WNEP. But while religious displays are there, “we’re going to put up irreligious messages in protest.”

The city apparently made the decision about where to place the banner. (McDonald claimed he only tampered with the banner because it was “higher” than the other displays.) At this point, the city has not rehung the banner, which is dangling. Nor have police announced that they have ticketed, arrested or talked with the culprit. He excused his actions “in light of the elementary school massacre in Connecticut.”

“We are staggered by the brazen action of this young man. We have a permit and he has violated the law and our free speech rights. We expect the city to expeditiously rehang our banner and police to investigate and take appropriate action to enforce the law,” said Dan Barker, FFRF co-president.

FFRF thanks Justin for all his help, including filing a police report concerning the vandalism. FFRF was told both by city and police officials today that the people in charge were not available and no one else could help FFRF.