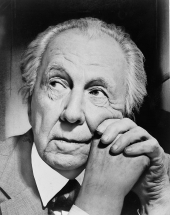 On this date in 1867, Frank Lloyd Wright was born in Wisconsin, where he was raised with Unitarian and Transcendentalist beliefs, and as an admirer of all things Welsh by his mother, Anna Lloyd Jones. Wright spent time on his uncles' farm near beautiful Spring Green and enrolled at 15 at the University of Wisconsin. He left the university for a job at a Chicago architectural firm, soon founding his own firm. He built 25 "Prairie style" homes and structures at Oak Park, Illinois, from 1889-1913.

His controversial personal reputation began in 1909 when he left his first wife and six children to run off with the wife of a client, Mamah Borthwick Cheney. Wright built Taliesin (Welsh for "shining brow") for her in Spring Green, and they lived there for two years. In 1914, a crazed servant from Barbados set fire to Taliesin, and stood by the exit door with an ax, where he hacked to death Mamah, her two children and four neighbors. The grief-stricken Wright built Taliesen II, which also became the apparent target of arson, then rebuilt Taliesen a third and final time.

His many famous structures include the Imperial Hotel, Tokyo; The Guggenheim Museum, New York; Taliesen West, his Arizona winter headquarters; the Marin County Civic Center; Price Tower; the Monona Terrace Convention Center, Madison, Wis. (built more than a half-century after it was first designed), and a series of lower-priced residential homes in the "Usonian" style, which he promoted during the Depression. Wright's "organic architecture" was a major influence on American architecture, including its low-pitched roofs, extended lines and open living spaces.

His very first work was Unity Chapel, a lovely, secular-looking building with simple lines, found in Spring Green. He buried Mamah there and was buried there himself, with a Unitarian minister reading from Emerson: "Who so would be a man would be a nonconformist." Wright had a pantheist-like reverence for nature. "Ugliness" was his idea of "sin," he told a reporter in 1955. He joined the First Unitarian Society in Madison, Wis., after designing its famous building in 1947-1950. D. 1959.

"I prefer to say that nature is the only body of God that we shall ever see."