There are 2 entries for this date: Sherry Matulis and Oliver Sacks 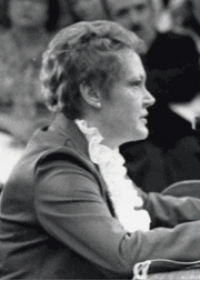 On this date in 1931, Sherry Matulis was "born an atheist (aren't we all?)," she mused, in the small town of Nevada, Iowa. "You couldn't go out to play hopscotch or kick-the-can without tripping over a church or two. (Or a tavern. The churches had a reciprocal arrangement, I think)," she wrote in a column for The Feminist Connection. "But tripping over all those churches wasn't the real problem. The real problem was all that time spent inside them — skipping over the facts of reality." (Oct. 24, 1981, speech to the FFRF national convention in Louisville, Ky.)

At age 20 she was surprised to find herself in the first Miss Universe contest, selected by photographs submitted by her husband. As the "village atheist" in Peoria, Ill., Matulis ran small businesses for many years and had five children. A poet and writer, she became a national spokesperson for abortion rights in the 1980s, when she wrote about her life-threatening experience in seeking an illegal abortion in Peoria in 1954. She was invited to speak about her experiences before a U.S. Senate subcommittee chaired by Orrin Hatch in 1981 and testified before several state legislatures.

A firm atheist, she appeared on many radio and national TV programs. Her articles, stories and poetry have been published in such periodicals as Redbook, Isaac Asimov's Science Fiction Magazine, Questar, Analog, Freethought Today and The Rationalist. She received many awards for her work to protect abortion rights, including from the American Humanist Association and the National Organization for Women. D. 2014.

Aware of light and yet condemned to grope
Through dark regression's cave, told she must find
Life's purpose in that blackness, without hope,
Denied the luminescence of her mind
Until, at last, she finds the darkness kind,
Religion's child — a babe once bright and fair,
Curls up, tucks in her tail, and says her prayer. 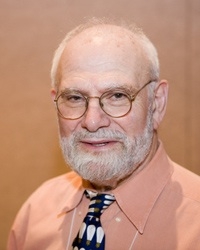 On this date in 1933, neurologist and author Oliver Sacks was born in London to a Jewish couple: Samuel Sacks, a medical general practitioner, and Muriel Elsie Landau, one of England's first female surgeons. He earned his medical degree at Oxford University (Queen's College) and did residencies and fellowship work at Mount Zion Hospital in San Francisco and at UCLA. He started practicing neurology in 1965 in New York, while maintaining his British citizenship. In July 2007 he was appointed professor of neurology and psychiatry at Columbia University Medical Center.

In 1966 he had started working as a consulting neurologist for Beth Abraham Hospital in the Bronx, a chronic care hospital where he encountered an extraordinary group of patients, many of whom had spent decades in strange, frozen states, like human statues, unable to initiate movement. He recognized these patients as survivors of the pandemic of sleeping sickness (encephalitis lethargica) that swept the world from 1916-27 and treated them with a then-experimental drug, L-dopa. They became the subjects of his book Awakenings, which later inspired a play by Harold Pinter ("A Kind of Alaska") and the Oscar-nominated feature film ("Awakenings") with Robert De Niro and Robin Williams.

Sacks was perhaps best known for his collections of case histories from the far borderlands of neurological experience, The Man Who Mistook His Wife for a Hat and An Anthropologist on Mars, in which he describes patients struggling with conditions ranging from Tourette's syndrome to autism, parkinsonism, musical hallucination, epilepsy, phantom limb syndrome, schizophrenia, retardation and Alzheimer's disease. He investigated the world of deaf people and sign language in Seeing Voices and a rare community of people in The Island of the Colorblind. He wrote about his experiences as a doctor in Migraine and as a patient in A Leg to Stand On. His autobiographical Uncle Tungsten: Memories of a Chemical Boyhood was published in 2001, followed by Musicophilia: Tales of Music and the Brain in 2007.

Sacks' work regularly appeared in the New Yorker, the New York Review of Books and various medical journals. The New York Times referred to Sacks as "the poet laureate of medicine" and in 2002 he was awarded the Lewis Thomas Prize by Rockefeller University, which recognizes the scientist as poet. He is an honorary fellow of both the American Academy of Arts and Letters and the American Academy of Arts and Sciences and holds honorary degrees from Oxford, the Karolinska Institute, Georgetown, Bard, Gallaudet, Tufts and the Catholic University of Peru.

In 2005 he received FFRF's Emperor Has No Clothes Award. His acceptance speech was titled "Invasion of Irrationalism." He also began serving in 2009 on the Foundation's Honorary Board. Not the least of his honors is 2-mile-wide Asteroid 84928 Oliversacks, discovered in 2003 and named for him. In a piece in The New York Times (“The Sabbath,"  Aug. 14, 2015, shortly before his death from cancer), Sacks revealed his mother’s response to learning that he, then a teen, was a (virginal) homosexual. His mother, one of 18 children in an Orthodox Jewish family, shrieked at him: “ 'You are an abomination. I wish you had never been born.’ ... The matter was never mentioned again, but her harsh words made me hate religion’s capacity for bigotry and cruelty." D. 2015.

As I write, in New York in mid-December, the city is full of Christmas trees and menorahs. I would be inclined to say, as an old Jewish atheist, that these things mean nothing to me, but Hannukah songs are evoked in my mind whenever an image of a menorah impinges on my retina, even when I am not consciously aware of it.