There are 2 entries for this date: Bill Nye and Bruce Lee 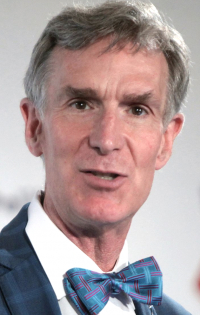 On this date in 1955, William Sanford "Bill" Nye was born in Washington, D.C., where he was also raised. Nye, "America's stand-up scientist," says on his website that his parents fostered his interest in science. His father was a prisoner of war during World War II and his mother was a Navy codebreaker who excelled in math and science. In 1977 Nye earned a degree in mechanical engineering from Cornell University, where one of his professors was Carl Sagan. He then moved to Seattle to work as an engineer at Boeing.

Nye invented a special sundial used during the Mars Exploration Rover mission and engineered a hydraulic device for Boeing still used on the 747. During this time, Nye cultivated his comedy style, working nights as a stand-up comic and eventually quitting Boeing to work as a comedy writer and performer. He founded the educational television series "Bill Nye the Science Guy" (1993-98). The show won 18 Emmys in its five-year run.

Nye has written two best-selling books on science: Undeniable: Evolution and the Science of Creation in 2014 and Unstoppable: Harnessing Science to Change the World in 2015. Nye has appeared on "Dancing With the Stars," "The Big Bang Theory," "Inside Amy Schumer" and in a documentary about his life and science advocacy titled "Bill Nye: Science Guy," which premiered at the South by Southwest Film Festival in March 2017 in Austin, TX. In 2017 he debuted the Netflix series "Bill Nye Saves the World."

Nye was married in 2006 by Saddleback Church pastor Rick Warren to classical musician Blair Tindall but the union was annulled after less than a year. Nye in 2017 revealed his family's history of ataxia, a neurological condition affecting coordination, saying he chose not to have children to avoid passing on the genetic condition.

"[I]t's fine if you as an adult want to run around pretending or claiming that you don't believe in evolution, but if we educate a generation of people who don't believe in science, that's a recipe for disaster. ... The main idea in all of biology is evolution. To not teach it to our young people is wrong." 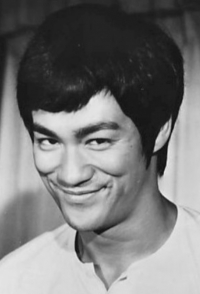 On this date in 1940, philosopher and martial artist Lee Jun-Fan, better known by his English name Bruce Lee, was born in San Francisco while his parents were on tour with the Chinese Opera. Lee was raised in Hong Kong, where he studied martial arts and worked as a child actor. He was raised by a Catholic mother and a Buddhist father and was not personally religious. When he was 18 he emigrated to the U.S to study drama and philosophy at the University of Washington-Seattle, eventually becoming a citizen.

Although he never received his degree in philosophy, his interest in the subject continued throughout his life and he wrote extensively about it while seeking to “infuse the spirit of philosophy into martial arts.” (Lee's essay "Me and Jeet Kune Do,” reprinted in Words of the Dragon, ed. John Little, 1997.) He combined influences from various schools into his personal martial arts philosophy, which he dubbed Jeet Kune Do (The Way of the Intercepting Fist).  Lee was named by Time magazine in 1999 as one of the 100 most influential people of the 20th century.

Lee and his wife had two children: Brandon, born in 1965, and Shannon, born in 1969. Brandon died in 1993 during filming of "The Crow" when another actor fired blank ammunition at him “which in turn propelled into Mr. Lee’s abdomen a lethal obstruction that had been lodged in the barrel of the gun during the filming of another scene several weeks earlier,” according to Linda Lee's lawsuit.

He died at age 32 in Hong Kong on July 20, 1973, of cerebral edema, which he had been treated for in May. An autopsy determined pain medication for a headache fatally exacerbated the condition, a determination that was contested by others. Biographer Matthew Polly wrote in 2018 that Lee had had his underarm sweat glands removed in 1972 because he thought underarm sweat was unphotogenic and that heat stroke during workouts may have contributed to the cerebral edema. He was buried in Seattle. (D. 1973)

“When asked by journalist Alex Ben Block in the summer of 1972 what his religious affiliation was, Lee answered: ‘None whatsoever.’ Block then pressed him further, asking him if he then believed in God: ‘To be perfectly frank, I really do not.’ ”

—John Little, "The Warrior Within: The Philosophies of Bruce Lee" (1996)