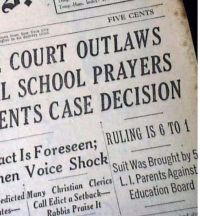 On this date in 1962, the landmark Supreme Court decision Engel v. Vitale declaring even nondenominational school prayer to be unconstitutional was handed down with a decision of 6 to 1.

In 1951, the New York State Board of Regents had approved a short, “nondenominational” prayer which they offered to school districts for voluntary classroom use, believing that a connection to the nation's “spiritual heritage” could help instill civic values and fight communism. The prayer read, “Almighty God, we acknowledge our dependence upon Thee, and we beg Thy blessings upon us, our parents, our teachers and our country. Amen.”

The Union Free School District No. 9 in New Hyde Park on Long Island directed principals to have this prayer “said aloud by each class in the presence of a teacher at the beginning of the school day.” A group of parents, backed by the American Civil Liberties Union and Jewish and Ethical Culture groups, sued the district in 1960. The plaintiffs were Steven and Thelma Engel, Daniel and Ruth Lichtenstein, Monroe and Julia Lerner, Lawrence and Frances Roth and Leonore Lyons. William Vitale Jr. was the school board president.

The law was upheld in the state courts but after arguments on April 3, 1962, the Supreme Court overturned the law, with only Justice Potter Stewart dissenting, and established a major precedent in the limiting of prayer in schools.

“When the power, prestige and financial support of government is placed behind a particular religious belief, the indirect coercive pressure upon religious minorities to conform to the prevailing officially approved religion is plain.” 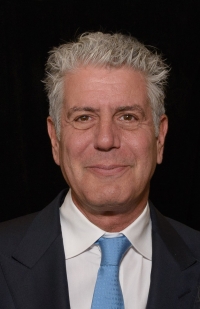 On this date in 1956, maverick chef, celebrity epicure, author and travel host Anthony Bourdain was born in New York City to Pierre and Gladys Bourdain. He grew up in New Jersey. Although his father was Catholic and his mother was Jewish, Bourdain was raised without religion. He graduated from Dwight-Englewood High School and attended Vassar for two years before dropping out. He started working at seafood restaurants in Provincetown, Mass., then graduated from the Culinary Institute in 1978 and began running kitchens in New York City.

In the 1990s, Bourdain became the executive chef at Brasserie Les Halles in Lower Manhattan where he served steak frites and onion soup. During his time working there, he sent an unsolicited article to The New Yorker detailing the gritty, subterranean world of urban restaurant culture.

To his surprise the article was accepted and noticed by book editors. This resulted in Bourdain’s memoir, Kitchen Confidential: Adventures in the Culinary Underbelly. The book branded Bourdain as a celebrity chef and earned him a new career on TV. Bourdain first hosted “A Cook’s Tour” on the Food Network before he spent eight seasons as a peripatetic host of Travel Channel’s “No Reservations,” on which he highlighted obscure cuisine and little-known restaurants.

On the show, Bourdain recharacterized line cooks as urban warriors and shined new light on a kitchen culture involving drugs, drinking and brutal hours. Bourdain was open about his past addictions with cocaine in the 1980s and alcohol abuse. He joined CNN in 2012 to host the show “Parts Unknown,” on which he explored political and historical topics with locals in countries across the globe often over food and drinks.

Bourdain earned multiple awards and nominations for his shows, including two Emmys for “No Reservations” and the Peabody Award in 2013 for “Parts Unknown.” He had the spirit of an activist and diplomat, advocated for marginalized populations and campaigned for safer working conditions for restaurant staffs. Several times on his television show, Bourdain mentioned that he didn’t believe in religion and was critical of religious hypocrisy.

Bourdain married his high school girlfriend in 1985 and they divorced in 2005. In 2007 he married Ottavia Busia, and they had a daughter born that same year. The couple separated in 2016. Bourdain began dating Italian actress Asia Argento in 2017 and, following her sexual abuse allegations against Harvey Weinstein, he became an ardent advocate against sexual harassment in restaurants and Hollywood. While working on an episode for “Parts Unknown” in France, Bourdain committed suicide in his hotel room. D. 2018.

"I'm closer to Hitchens' view on this. Many of the world's ills can be tracked back to [religion]."

—Bourdain, interview with NotQuiteNigella.com (May 2011) 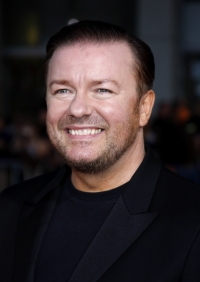 On this date in 1961, Ricky Dene Gervais, was born. He makes TV shows and books and movies, but mostly he makes people laugh, and he makes them think, freely. (He's an Honorary Associate of the National Secular Society and decided as a child that he was an atheist.) He grew up 40 miles west of London, England, in Reading, to working-class parents. He graduated from University College-London with a degree in philosophy and then worked in radio.

What eventually brought him fame were his television series "The Office," which debuted in 2001, and "Extras," in 2005. He co-wrote and co-directed both with Stephen Merchant, his friend and frequent collaborator. Gervais also played the lead roles of David Brent in "The Office" and Andy Millman in "Extras." "The Office" was remade for audiences in France, Germany, Quebec and the U.S., where "Extras" premiered on HBO in 2005.

He played leading roles in the movies "Ghost Town," "The Invention of Lying" and "Night at the Museum." He's had soldout standup comedy tours, wrote the best-selling "Flanimals" book series and starred with Merchant and Karl Pilkington in his podcast of "The Ricky Gervais Show." He has been with his partner Jane Fallon since 1982.

He's received two Golden Globes for "The Office" (one for acting, one for the show itself), as well as numerous British Academy Television Awards and British Comedy Awards. He won a 2007 Emmy Award for Outstanding Lead Actor in a Comedy Series for his role in "Extras." In a conversation with Richard Dawkins, he explained how he became an atheist, recounting an afternoon at home when he was about 8. His mother was ironing and he was drawing Jesus on the cross as part of his bible studies homework.

His brother, Bob, 11 years older than Ricky, asked him why he believed in God, a question which mortified their mother. Gervais remembered thinking, "Why was that a bad thing to ask? If there was a god and my faith was strong, it didn't matter what people thought. Oh ... hang on. There is no God. He knows it, and she knows it deep down. It was as simple as that. I started thinking about it and asking more questions, and within an hour I was an atheist."

Gervais hosted the Golden Globes award ceremony for a record fifth time in 2020. In 2011 he irreverently ended the show by saying, “Thank God I’m an atheist.”

"It's always better to tell the truth. The truth doesn't hurt, and saying that, my mother only ever lied to me about one thing.  She said there was a God. But that's because when you're a working-class mum, Jesus is like an unpaid babysitter. She thought if I was God-fearing, then I'd be good." 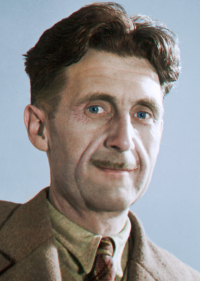 On this date in 1903, writer George Orwell (né Eric Arthur Blair) was born in India. Educated at Eton College, Blair joined the Indian Imperial Police in Burma as a young man, later writing a novel, Burmese Days (1934), about it. Bumming around Europe for the experience, Blair wrote an autobiographical account, Down and Out in Paris and London (1933).

Teaching for income, he continued to write novels, including A Clergyman's Daughter (1935), with its unflattering look at the repression of religion, Keep the Aspidistra Flying (1936), and Coming Up for Air (1939). He also wrote a sympathetic nonfiction account of miners, The Road to Wigan Pier (1937). His book, Homage to Catalonia (1938), was written after he was wounded by Francoists while fighting for Loyalists in the Spanish Civil War.

When Stalinists came after Blair and his anarchist friends, his views on communism changed. While he supported a mild socialism, his masterpiece, Animal Farm (1945), skewered Stalinism: "All animals are equal but some animals are more equal than others." Religion was satirized by the character "Moses," a bird, who was a "spy and a tale-bearer," who talked up "Sugarcandy Mountain, to which all animals went when they died." Blair did commentary for the BBC during World War II.

His second masterpiece, the cautionary tale Nineteen Eighty-Four (1949), unforgettably put "Newspeak" and "Big Brother" into the political lexicon and conjured up a terrifying image of totalitarianism. His views of religion became increasingly skeptical. In 1968 the four-volume Collected Essays, Journalism and Letters of George Orwell was published. He married Eileen O'Shaughnessy in 1936. She died in 1945 during a hysterectomy. He married Sonia Brownell the year before he died at 46 of tuberculosis. (D. 1950)

“One must choose between God and Man, and all 'radicals' and 'progressives,' from the mildest liberal to the most extreme anarchist, have in effect chosen Man.”

—Orwell, "Reflections on Gandhi," essay in the Partisan Review (1949) 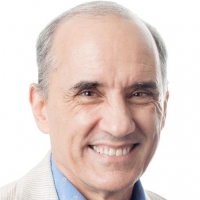 On this date in 1949, Dan Barker was born in California. His father, Norman Barker, a professional trombonist, played with Hoagy Carmichael and appeared in a cameo with Judy Garland in the movie "Easter Parade." His mother, Patricia, was a talented amateur singer and the family often used music in their volunteer evangelism. Barker, who became a piano player and songwriter, worked as a volunteer missionary as a teenager, going to Mexico with youth groups and becoming fluent in Spanish.

He attended Asuza Pacific College, majoring in religion. Ordained by a Christian congregation, he worked as an assistant minister in several churches but mainly freelanced with a musical ministry, also writing secular children's music. Many of his songs and two Christian children's musicals were produced by Manna Music and other Christian publishing houses.

In his early 30s he started a course of reading in science, liberal theology and rationalism that led to "an intense inner conflict." Finally, "I just lost faith in faith." In 1983, he publicly left religion. He joined the staff of the Freedom From Religion Foundation in 1987, where he has served as public relations director, becoming co-president with his wife Annie Laurie Gaylor in 2004. FFRF published his book Losing Faith in Faith (1992), as well as three freethought/humanist books for children, including Just Pretend, and more than 70 freethought songs, including "You Can't Win with Original Sin," "None of the Above" and "Nothing Fails Like Prayer." He collaborated with lyricist Charles Strouse on the song, “Poor Little Me.”

Barker has recorded his songs and other traditional and contemporary freethought music on three CDs for FFRF: "Friendly Neighborhood Atheist," "Beware of Dogma” and “Adrift on a Star.” He also freelances as a busy keyboardist and piano player in Madison, Wis., performing jazz and the Great American Songbook, much of which he has discovered was written by secular songwriters.

He has participated in more than 100 public debates with Christian clergy, religious scholars and even an imam or two. His most recent books include Godless: How an Evangelical Preacher Became One of America’s Leading Atheists, foreword by Richard Dawkins (2008); The Good Atheist: Living a Purpose-Filled Life Without God, foreword by Julia Sweeney (2011); Life Driven Purpose: How an Atheist Finds Meaning, foreword by Daniel C. Dennett (2015); GOD: The Most Unpleasant Character in All Fiction, foreword by Dawkins (2016); Free Will Explained: How Science and Philosophy Converge to Create a Beautiful Illusion (2018); and Mere Morality (2018). Barker's books are available here.

He has appeared on many national television talk shows, including "The Daily Show," "The Phil Donahue Show," "Oprah," national Fox TV, ABC’s “Good Morning America,” “Religion & Ethics News Weekly” and “60 Minutes Australia.” He has co-hosted FFRF’s radio and TV shows and is a frequent speaker on college campuses and freethought conferences. He has four children from his first marriage and a daughter with Gaylor.

“I threw out the bath water, and there was no baby there.”