There are 2 entries for this date: Bjork and Voltaire 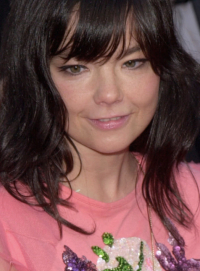 On this date in 1965, recording artist Björk (née Björk Gudmundsdottir) was born in Reykjavík, Iceland. Her mother, an environmental activist, and her father, a union electrician, divorced when she was 6. She moved with her mother to a commune. She studied classical piano as an elementary student. When her teachers submitted a tape of her singing "I Love to Love" to Iceland's Radio One, it became a hit.

Her first album was released when she was 11. She had formed two bands by age 14. She sang with an avante-garde pop band, The Sugarcubes, in 1986, which became successful internationally. Bjork ventured on a solo career in 1993, which has encompassed the dance and club culture, punk, jazz standards and ballads. She won the 2000 Best Actress Award at Cannes for playing the lead role in "Dancer in the Dark," for which she also composed the score. "Dancer" also won Best Picture at Cannes.

Björk met guitarist Þór Eldon in the early '80s. They married in 1986 and had a son, Sindri, that same year but divorced soon after his birth.

Björk at the premiere of "Dancer in the Dark" at the Cannes Film Festival; Paul Smith/Featureflash Photo.

"I was sure that I was an atheist, but as I matured I realized nature is my religion." 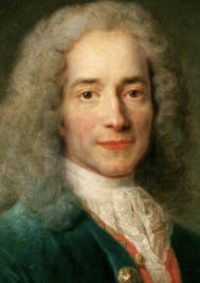 On this date in 1694, Age of Enlightenment leader François-Marie Arouet, known as Voltaire, was born in Paris. Jesuit-educated, he began writing clever verses by the age of 12. He launched a successful playwriting career in 1718, interrupted by two imprisonments in the Bastille for critiques of the government. He adopted the pen name Voltaire after his second imprisonment and was released after agreeing to move to London.

In London he wrote Lettres philosophiques sur les Anglais (1733), which galvanized French reform. The book also satirized the religious teachings of René Descartes and Blaise Pascal, including Pascal's famed "wager" on God. He wrote, "The interest I have in believing a thing is not a proof of the existence of that thing."

His publisher was sent to the Bastille and Voltaire had to escape from Paris again as judges sentenced Lettres to be "torn and burned in the Palace." Voltaire spent a calm 16 years with his deistic mistress, Madame du Châtelet, in Lorraine. He dedicated Traite de metaphysique (1734) to her. Voltaire continued writing amusing but meaty philosophical works.

After an earthquake leveled Lisbon in 1755, in which 15,000 people perished and another 15,000 were wounded, he wrote the 180-line "Poème sur le désastre de Lisbonne," which says, "But how conceive a God supremely good / Who heaps his favours on the sons he loves / Yet scatters evil with as large a hand?"

Voltaire by 1744 found life at Châtelet's château confining. Visiting Paris that year, he fell in love with his sister's daughter Marie Louise Mignot, 18 years his junior. While his interest was sexual, as his letters to her discovered in 1957 showed, they never married despite spending much of the next 30 years together until his death and perhaps lived platonically.

Voltaire had purchased a chateau in Geneva, where he wrote Candide (1759). To avoid Calvinist persecution, he moved across the border to Ferney, where he lived for 18 years until his death. Voltaire began to openly challenge Christianity, calling it "the infamous thing." He wrote Frederick the Great, "Christanity is the most ridiculous, the most absurd, and bloody religion that has ever infected the world." His Dictionnaire philosophique was published in 1764 without his name. Although the first edition soon sold out, Geneva officials, followed by Dutch and Parisian censors, had the book burned. It was published in 1769 as two large volumes.

Voltaire campaigned fiercely against civil atrocities in the name of religion, writing pamphlets and commentaries about the 1762 barbaric execution of a Huguenot trader, who was first broken at the wheel, then burned at the stake. Voltaire's campaign for justice and restitution ended with a posthumous retrial in 1765, during which 40 Parisian judges declared the defendant innocent. Voltaire urgently tried to save the life of Chevalier de la Barre, a 19-year-old sentenced to death for blasphemy for failing to remove his hat during a religious procession. In 1766 de la Barre was beheaded, then his body was burned along with a copy of Dictionnaire philosophique.

Accounts of his death at age 83 on May 30, 1778, vary widely and range from his acceptance of the Catholic last rites to refusing them defiantly. One story had him telling a priest who urged him to renounce Satan that "Now is not the time for making new enemies." The quip was later found to have originated from a joke first published in a Massachusetts newspaper in 1856.

He was, however, denied a Christian burial in Paris. His heart and brain were embalmed separately before burial in sanctified ground at a Cistercian abbey near Troyes, where the abbot was his nephew and Marie Louise Mignot's brother. The National Assembly had his remains brought back to Paris in 1791 and enshrined in the Panthéon. (D. 1778)

“Atheism is the vice of a few intelligent people.
There are no sects in geometry.
The truths of religion are never so well understood as by those who have lost the power of reasoning.
Sect and error are synonymous.
Common sense is not so common.”