There are 3 entries for this date: Émile Zola , Léon Gambetta and Lloyd Morain 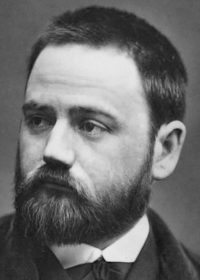 On this date in 1840, Émile Édouard Charles Antoine Zola was born in Paris. The novelist pioneered naturalistic writing, believing ugly problems could not be solved as long as they stayed hidden. As a struggling young writer, Zola supported himself as a clerk. Legend has it he sometimes resorted to trapping birds on his windowsill in order to eat. Zola also moonlighted as a political reporter and critic. He was fired from a publishing house after an early autobiographical novel created notoriety.

His breakthrough novel was Therese Raquin (1867). By the time his book L'Assammoir ("The Drunkard," 1878) appeared, Zola was France's most famous writer, yet he was barred his entire life from the Academy. His book Germinal (1885), about conditions in a coal mine leading to a strike, was denounced by the rightwing. Nana (1880) examined sexual exploitation.

Zola's most enduring work is his open letter "J'Accuse," about the Dreyfus case. He campaigned with Clemenceau to free the the French Jewish army officer falsely accused of spying. Zola was sentenced to imprisonment for writing "J'Accuse" in 1898, escaping to England until he could safely return after Dreyfus' name had been cleared. Zola, who was baptized Catholic, was a notable critic of the Catholic Church (and vice versa). The church particularly condemned his books Lourdes, Rome, and Paris (1894-98). He was an honorary associate of the British Press Association. D. 1902.

"Given Émile Zola's reputation as an agnostic and a radical thinker, he has often been avoided by scholars with a religious background."

—Anthony Evenhuis, "Messiah Or Antichrist?: A Study of the Messianic Myth in the Work of Zola" (1998) 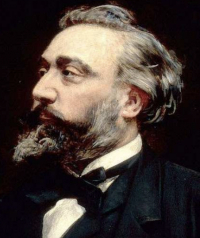 On this date in 1838, Léon Gambetta was born in Cahors, France. In 1857, he went to Paris to study law, and was called to the bar in 1859. He expressed very strong republican opinions (France was at that time governed by Napoleon III in the Second Empire) and in 1868 he became famous for his defense in a political case, called the Affaire Baudin. Baudin had died in an attempted coup, and Gambetta defended eight journalists who were prosecuted for attempting to build a memorial to him.

In 1869 Gambetta was elected to the Legislative Assembly, where he opposed the Franco-Prussian War, which broke out in July 1870. He was instrumental in forming a provisional government and declaring a republic after Napoleon III was captured by the Germans. Gambetta then helped to lead the defense of France from Germany. He briefly left government in March 1871 after ratification of a peace treaty which gave up Alsace and Lorraine. He was then elected to the National Assembly in July of that same year, where he was instrumental in the vote to institute the Third Republic, rather than to restore a Bourbon monarchy.

In addition to being a republican, Gambetta was part of the anti-clerical faction and an avowed atheist. He spoke of the conflict between “those who pretend to know everything through revelation, in an immutable manner, and those who march, thinking and progressing, to the suggestions of science, which every day accomplishes progress and which pushes back the boundaries of human knowledge.” (The End of the Soul: Scientific Modernity, Atheism, And Anthropology in France, 1876–1936 by Jennifer Michael Hecht, 2003.)

Gambetta remained active in politics, becoming president of the Chamber of Deputies, until he died at age 44 of appendicitis. He wanted France to be a beacon for freethought as well as political freedom, and on his death made a contribution to freethought — his brain went to the Society of Mutual Autopsy, a group that wished to investigate the workings of the brain through dissection, attempting to show physical traits in connection with mental properties. D.1882.

—Gambetta, quoted in "The End of the Soul" by Jennifer Michael Hecht (2003) 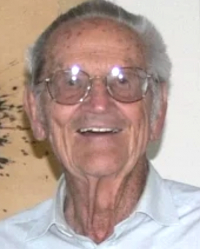 On this date in 1917, Lloyd Morain was born in Pomona, Calif. He grew up in California and, after winning a scholarship essay contest, graduated from UCLA. During World War II he served in Britain with the U.S. Air Corps. Already active in the American Humanist Association, while in Britain he met with humanist groups with the goal of greater international humanist cooperation after the war. He continued this work, moving on to continental Europe, in the late 1940s.

In 1952 he and his wife, Mary Stone Dewing Morain, were among the founders of the International Humanist and Ethical Union. At the time, Morain was serving as president of the American Humanist Organization, a role he filled from 1951-55 and again from 1969-72. In the 1950s, Morain and his wife were also involved in supporting humanist organizations all over the world, including in traditionally religious regions of Africa. In 1954, they wrote the book Humanism as the Next Step: An Introduction for Liberal Protestants, Catholics, and Jews, which remains in print in a revised edition.

Morain served as the editor of Humanist Magazine from 1978-90. Though his early background was in psychological consulting, and he continued to work for the mining and utilities industries, he dedicated much of his life to humanist and social causes, including family planning and homelessness. He received several awards from AHA throughout his career: the Humanist Merit Award in 1956, the Humanist Distinguished Service Award in 1972 and the Humanist Heritage Award in 2007. In 1994 he and his wife won the Humanist of the Year Award jointly. D. 2010.

"Back through the centuries whenever people have enjoyed keenly the sights and sounds and other sensations of the world about them, and enjoyed these for what they were — not because they stood for something else — they were experiencing life humanistically."