There are 1 entries for this date: Clarence Darrow 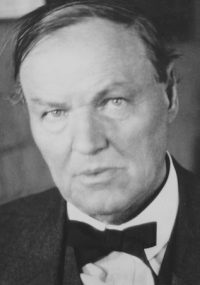 On this date in 1857, Clarence Darrow, later dubbed "Attorney for the Damned" and "the Great Defender," was born in Farmdale, Ohio. For a time he lived in a home that had served as a stop on the Underground Railroad. His father was known as the "village infidel." Darrow attended the University of Michigan Law School for one year, then passed the bar in 1878 and moved to Chicago. There he joined protests against the trumped-up charges against four radicals accused in the Haymarket Riot case.

Darrow became corporate counsel for the city of Chicago, then counsel for the Chicago & North Western Railway. He quit this lucrative post when he could no longer defend their treatment of injured workers, then went on to defend without pay socialist striker Eugene V. Debs. In 1907, Darrow successfully defended labor activist "Big Bill" Haywood, charged with assassinating a former governor. His passionate denunciation of the death penalty prompted him to defend the famous killers, Loeb and Leopold, who received life sentences in 1924.

His most celebrated case was the Scopes Trial, defending teacher John Scopes in Dayton, Tenn., who was charged with the crime of teaching evolution in the public schools. Darrow's brilliant cross-examination of prosecuting attorney William Jennings Bryan lives on in legal history. During the trial, Darrow said: "I do not consider it an insult, but rather a compliment to be called an agnostic. I do not pretend to know where many ignorant men are sure — that is all that agnosticism means."

Darrow wrote many freethought articles and edited a freethought collection. His two appealing autobiographies are The Story of My Life (1932), containing his plainspoken views on religion, and Farmington (1932). He also wrote Resist Not Evil (1902), An Eye for An Eye (1905), and Crime, Its Causes and Treatments (1925). His freethought writings are collected into Why I Am an Agnostic and Other Essays. He told The New York Times, "Religion is the belief in future life and in God. I don't believe in either." (April 19, 1936)