There are 2 entries for this date: Lillie Devereux Blake and George Soros 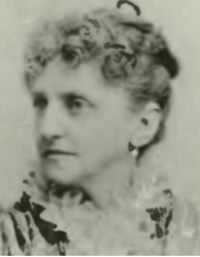 On this date in 1833, Lillie Devereux Blake, née Elizabeth Johnson Devereux, was born into a wealthy family in Raleigh, North Carolina. The famous beauty came into money as a young woman and married a handsome attorney in 1855, who freely spent her fortune before shooting himself in 1858. Blake, as the young mother of two daughters, had to turn her "scribbling" into a way to support her family with her pen.

In 1861, then living in New York City, she became a war correspondent. By 1882, 500 of her stories, articles, speeches and lectures, plus five novels, had been published. She earned about $3,600 over a lifetime of writing, often under the pen name Tiger Lily.

At 35 she turned her energies almost exclusively toward working for women's rights. Protesting Columbia University's exclusion of women on behalf of her daughters, she could not budge the opposition of Dr. Morgan Dix, rector of Trinity Church in New York City. In 1883 she encountered her theological foe again when he embarked on an anti-suffrage lecture series. Blake responded immediately by scheduling her own lectures, including one on "Woman in Paganism and Christianity." Dix, she said, was "a theological Rip Van Winkle, who has slept, not 20 but 200 years."

She campaigned for the rights of women prisoners ("Is it a crime to be a woman?"), and achieved many reforms. A good friend of Elizabeth Cady Stanton, she served on The Woman's Bible revising committee. For 11 years she ran the successful New York State Suffrage Association, defeating an anti-suffrage governor, winning the right to vote for rural women at elections of school trustees and getting women accepted as census takers. (D. 1913)

“Every denial of education, every refusal of advantages to women, may be traced to this dogma [of original sin], which first began to spread its baleful influence with the rise of the power of the priesthood and the corruption of the early Church.” 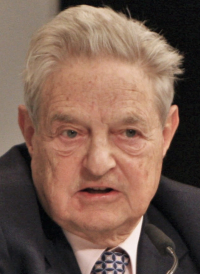 On this date in 1930, George Soros (né György Schwartz), entrepreneur, philanthropist and social activist, was born to upper-middle-class, nonobservant Jewish parents in Budapest, Hungary. The family changed its surname to Soros in 1936 because Jews were being persecuted. He lived through the Nazi occupation that resulted in the murder of over 500,000 Hungarian Jews and posed as a teen as Christian to escape detection.

After the establishment of a communist government under Soviet hegemony after World War II, he fled to England in 1947 to attend the London School of Economics, where he earned bachelor's and advanced degrees in philosophy.

He worked for a merchant bank in London before emigrating in 1956 to New York City, where he began working in finance and investment and securities analysis. He developed the theory of reflexivity, which posits that market values are driven by the fallible ideas of participants as well as economic fundamentals. He launched the Soros Fund Management in 1970, a hedge fund that eventually made him a multi-billionaire.

He started the Open Society Foundations in 1979, supporting democracy, human rights and economic development in over 120 countries. In 2017 he announced he had transferred $18 billion of his fortune into an endowment to fund future work of the Foundations, bringing his total giving to the Foundations since 1984 to over $32 billion. He has also heavily supported liberal and progressive causes and political candidates, making him a convenient target for conservatives and the Religious Right.

Soros has written 14 books, including Underwriting Democracy (1991), The Bubble of American Supremacy: Correcting the Misuse of American Power (2004), The Crash of 2008 and What it Means (2009) and The Tragedy of the European Union: Disintegration or Revival? (2014). Soros was twice divorced with five children when he married Tamiko Bolton in 2013, a Japanese-American businesswoman 42 years his junior.

Among the FAQs (frequently asked questions) on his website is "What faith is George Soros?" It's answered like this: "He identifies himself as an atheist." About his views on religion: Soros "respects all faiths and religious practices. He believes that people of faith and faith communities contribute to the public’s understanding of pressing social issues and often add a principled, moral aspect to debates that are too often dominated by politicians, statistics and polling."

STEVE KROFT: Are you religious?
GEORGE SOROS: No.
KROFT: Do you believe in God?
SOROS: No.