There are 4 entries for this date: Florence Nightingale , Katharine Hepburn , George Carlin and Dante Gabriel Rossetti 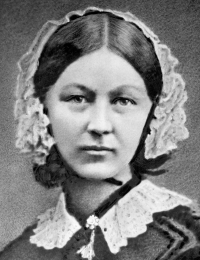 On this date in 1820, Florence Nightingale was born in Florence, Italy, to a well-to-do British family which moved back to England the next year. Refusing to conform to the limited expectations for women of her class, she entered hospital work and was appointed superintendent of a Hospital for Invalid Gentlewomen in London in 1853. To award her for two years of diligent organization in caring for the wounded during the Crimean War, her government offered 50,000 pounds for a Nightingale School for Nurses.

Nightingale was the first woman to receive the Order of Merit, among many other honors. British freethought encyclopedist Joseph McCabe identified her as a non-Christian theist, rejecting rites and ceremonies or denominational claims but mightily impressed by Jesus' "Sermon on the Mount." She wrote about her rejection of many religious claims in Fraser's Magazine (May and July 1873). D. 1910.

"The Church is now more like the Scribes and Pharisees than like Christ. ... What are now called the 'essential doctrines' of the Christian religion [Christ] does not even mention." 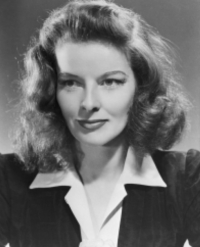 On this date in 1907, Katharine Houghton Hepburn was born in Hartford, Conn., the daughter of a progressive physician and a suffragist/birth control advocate. The legendary tomboy, independent thinker and athlete graduated from Bryn Mawr College in 1928 with degrees in history and philosophy. She went on to become a celebrated actress (surviving a critic's comment that she was "box office poison") and a four-time Oscar winner.

Hepburn routinely defied Hollywood convention and wore her trademark slouchy slacks everywhere. She wrote about her freethought views in her autobiography, Me (1991), and spoke about her atheism and other unconventional views in interviews. (D. 2003)

“I'm an atheist, and that's it. I believe there's nothing we can know except that we should be kind to each other and do what we can for each other.” 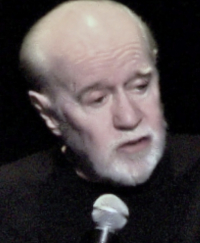 On this date in 1937, George Dennis Patrick Carlin was born in Manhattan, N.Y., to an Irish Catholic family. The salty stand-up comedian received two Grammys, for "FM & AM" (1972) and "Jammin' " (1993). He was arrested for disorderly conduct in Milwaukee in 1972 for performing "Seven Dirty Words You Can't Say on Radio or Television." A case about his right to perform this show on the radio went all the way up to the U.S. Supreme Court. Carlin was the first host of "Saturday Night Live" (1975), and appeared in 11 HBO specials since 1977.

Typical quips: "When evolution is outlawed, only outlaws will evolve." "If churches want to play the game of politics, let them pay admission like everyone else." "I'm completely in favor of the separation of Church and State. My idea is that these two institutions screw us up enough on their own, so both of them together is certain death." Carlin inspired the Freedom From Religion Foundation's Emperor Has No Clothes Award, honoring public figures who "tell it like it is" about religion. He was a 2001 recipient.

Carlin died of heart failure at age 71 in 2008. His ashes were scattered at New York City nightclubs where he performed and over a New Hampshire lake where he had attended summer camp as a teen. His autobiography Last Words was published in 2009. The George Carlin Letters: The Permanent Courtship of Sally Wade was published by his widow in 2011. (D. 2008)

"When it comes to bullshit, big-time major-league bullshit, you have to stand in awe of the all-time champion of false promises and exaggerated claims: Religion." 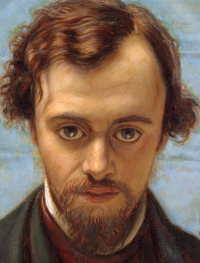 On this date in 1828, Dante Gabriel Rossetti was born in England, the son of an exiled Italian patriot. Educated at King's College London and a drawing academy, Dante was both a well-known poet and painter, and became part of the Pre-Raphaelite movement (made up largely of freethinking artists). Rossetti's sister was the poet Christina Rossetti. His early paintings, which were in oil and often with religious themes, were immediate hits, although some critics felt his poetry was his artistic forte.

Rossetti turned to watercolors and themes inspired by his namesake Dante Alighieri (whom Rossetti translated into English) and medieval themes in keeping with the Pre-Raphaelites. A favorite model was future wife Elizabeth Siddal, whose auburn hair and pure looks he immortalized. His sister Christina also posed for him. (Rossetti was played by Oliver Reed in Ken Russell's 1967 television film "Dante's Inferno." Kelsey Grammer appeared in an episode of "Cheers" as Rossetti for his Halloween costume. His wife dressed as Christina.)

He married Siddall in 1860. So ill and frail from either tuberculosis or an intestinal disorder that she had to be carried to the wedding, two years later she was dead at age 32 of an overdose of laudanum she had become addicted to. Rossetti died 20 years later at age 53 in 1882 of Bright's disease (of the kidneys) after living for several years as a recluse due to ill health, increasing mental instability and addiction to chloral hydrate.

Wiliam Michael Rossetti, his brother, wrote in 1895: "He was never confirmed, professed no religious faith, and practised no regular religious observances; but he had ... sufficient sympathy with the abstract ideas and the venerable forms of Christianity to go occasionally to an Anglican church — very occasionally, and only as the inclination ruled him."

PHOTO: Portrait of Rossetti at age 22 by William Holman Hunt.

"My brother was unquestionably sceptical as to many alleged facts, and he disregarded formulated dogmas, and the practices founded upon them. For theological discussions of whatsoever kind he had not the faintest taste, nor yet the least degree of aptitude."