There are 4 entries for this date: François-Désiré Bancel , George Meredith , Abraham Lincoln and Charles Darwin 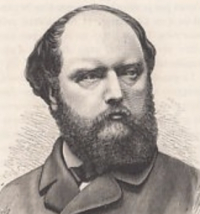 On this date in 1822, François-Désiré Bancel was born in France. He was educated at Touron and Grenoble, became a lawyer and then a member of the Legislative Assembly in 1849. Bancel was known as one of the most passionate critics of the royalists and clerics. After Napoleon III expelled him in 1852, he moved to Brussels and taught at the Free University.

A deist, according to freethought historian Joseph McCabe, he "gave great assistance in the Belgian Rationalist movement." Bancel was again elected to the legislature in 1869 upon his return to France. A boulevard in Valence and a street in Lyon bear his name. D. 1871. 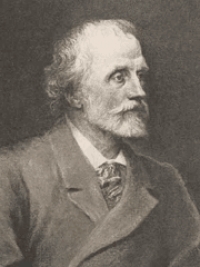 On this date in 1829, novelist and poet George Meredith was born in Portsmouth, England. His mother died when he was 5 and when his father later had to declare bankruptcy, George was sent to live with relatives. At 15 he had his only formal education when he was sent to a Moravian school for less than two years. Apprenticed to a solicitor, he jettisoned legal work when he began writing articles and poetry for magazines. Poems (1851) was followed by The Shaving of Shagpat (1855), neither very successful. He wrote 19 novels, the last published posthumously in 1910.

He worked as a reporter, read for a book publishing company and was a war correspondent. Among the writers he encouraged were Thomas Hardy and Olive Schreiner. He married widow Mary Ellen Nichols, who was seven years older than him, in 1849. She became the role model for many of his heroines. It was not a successful marriage. She eloped with an artist in 1858, leaving their one surviving child with him, and died three years later.

The Ordeal of Richard Feverel, (1859), a semi-autobiographical account of his marriage, had better success. Meredith married Marie Vulliamy in 1864. Other books include The Egoist (1879) and Diana of the Crossroads (1885). He was quoted in Fortnightly Review in July 1909 saying: "The man who has no mind of his own lends it to the priests." He was nominated seven times for the Nobel Prize in Literature. D. 1909.

“When I was quite a boy, I had a spasm of religion which lasted about six weeks, during which I made myself a nuisance in asking everybody whether they were saved. But I never since have swallowed the Christian fable.” 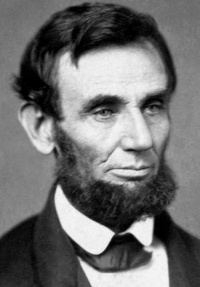 On this date in 1809, the 16th U.S. president, Abraham Lincoln, was born in Hardin County, Kentucky. Largely self-educated, he worked on farms, splitting those famous rails, and clerking at a store. Lincoln spent eight years in the Illinois Legislature and also rode the circuit of courts for many years. He married Mary Todd; only one of their four sons lived to adulthood. While seeking the nomination for Congress, Lincoln ruefully wrote Martin M. Morris, of Petersburg, Illinois, that "There was the strangest combination of church influence against me ..  everywhere contended that no Christian ought to vote for me because I belonged to no Church, [and] was suspected of being a Deist." (March 26, 1843, Complete Works of Abraham Lincoln, Nicolay & Hay edition.)

Lincoln ran against Stephen A. Douglass for U.S. senator in 1858, losing the election but winning a national reputation. Elected as a Republican as president in 1860, Lincoln guided the nation during the Civil War, issuing the Emancipation Proclamation on Jan. 1, 1863, which freed slaves within the Confederacy. He won reelection in 1864. His wise plans for peace ("With malice toward none; with charity for all") were foiled by an assassin's bullet on April 14, 1865, at Ford's Theatre in Washington, D.C.

Among the words inscribed at the Lincoln Memorial are Lincoln's Second Inaugural address, which, though full of conventional references to the "Almighty," astutely observes of the North and the South: "Both read the same Bible and pray to the same God, and each invokes His aid against the other. It may seem strange that any men should dare to ask a just God's assistance in wringing their bread from the sweat of other men's faces, but let us judge not, that we be not judged."

While Lincoln punctuated his eloquent speeches with deistic references to "Divine Providence," in which he firmly believed, he was strongly rationalist and not conventionally Christian. Among the friends who testified to that was Ward Hill Lamon in Life of Abraham Lincoln (1872). Lamon, who was religious, had known Lincoln for years and wrote: "Perhaps no phrase of his character has been more persistently misrepresented and variously misunderstood than this of his religious belief."

Lamon related how Lincoln wrote a "little book," probably an extended essay, to prove "First, that the Bible is not God's revelation. Second, that Jesus was not the Son of God." He took the manuscript to Samuel Hill, a shopkeeper and unbeliever, whose son considered the work "infamous." Hill reportedly snatched the book from Lincoln and threw it into the fire to protect Lincoln's political career, a story other contemporaries corroborated had been told them.

"But he never told anyone that he accepted Jesus as the Christ," Lamon noted. His book also quotes Lincoln's first law partner, John T. Stuart: "Lincoln went further against Christian beliefs and doctrines and principles than any man I ever heard: he shocked me." David Davis, who knew Lincoln for 20 years and rode with him on the court circuit, told Lamon: "He had no faith, in the Christian sense of the term." D. 1865.

Lincoln on Nov. 8, 1863, 11 days before the Gettysburg Address; photo by Alexander Gardner.

“Mr. Lincoln was never a member of any Church, nor did he believe in the divinity of Christ, or the inspiration of the Scriptures in the sense understood by evangelical Christians."

"When a boy, he showed no sign of that piety which his many biographers ascribe to his manhood. When he went to church at all, he went to mock, and came away to mimic."

"When he came to New Salem, he consorted with Freethinkers, joined with them in deriding the gospel story of Jesus, read Volney and Paine, and then wrote a deliberate and labored essay, wherein he reached conclusions similar to theirs.” 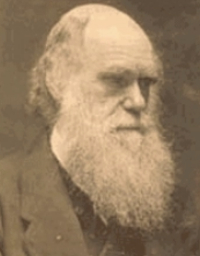 On this date in 1809, Charles Robert Darwin was born in England. He prepared for the Church at Cambridge, but his passion was natural history. During his work as a naturalist on the sailing ship the Beagle, he began documenting and formulating his theory of evolution. At the time he wrote the monumental On the Origin of Species (1859), he still accepted the "First Cause" argument. Gradually he threw off his religious beliefs. In his Descent of Man (1871), Darwin wrote: "Many existing superstitions are the remnants of former false religious beliefs. The highest form of religion — the grand idea of God hating sin and loving righteousness — was unknown during primeval times.""

He wrote the Rev. J. Fordyce on July 7, 1879, that "an agnostic would be the most correct description of my state of mind." Darwin penned his memoirs between the ages of 67 and 73, finishing the main text in 1876. These memoirs were published posthumously in 1887 by his family under the title Life and Letters of Charles Darwin, with his hardest-hitting views on religion excised. Only in 1958 did Darwin's granddaughter Nora Barlow publish his Autobiography with original omissions restored (see excerpt below). D. 1882.

“I can indeed hardly see how anyone ought to wish Christianity to be true; for if so the plain language of the text seems to show that the men who do not believe, and this would include my Father, Brother, and almost all my best friends, will be everlastingly punished. And this is a damnable doctrine.”