There are 3 entries for this date: Terry Jones , Barry Duke and Langston Hughes 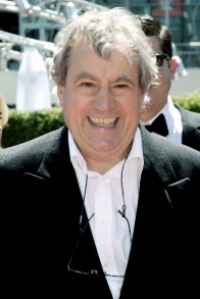 On this date in 1942, comedian, writer and director Terence Graham Parry Jones was born in Colwyn Bay, Wales. He graduated with a degree in modern history from St. Edmund Hall, Oxford. His first successful TV show, in which he paired up with Michael Palin, was "The Love Show" (1965). Jones became part of the classic comedy TV show "Monty Python's Flying Circus" (1969-74) with Palin, Graham Chapman, John Cleese, Terry Gilliam and Eric Idle.

Jones' irreverent credits include writing and directing the films "Monty Python and the Quest for the Holy Grail" (1975), "Life of Brian" (1979) and "The Meaning of Life" (1983). He has written several books and screenplays, including comic works and more serious writing on medieval history. His first book was Chaucer's Knight: The Portrait of a Medieval Mercenary (1980), an alternative take on Geoffrey Chaucer's "The Knight's Tale." Jones asserted that instead of a paragon of Christian virture, the knight can be interpreted as a typical mercenary and potentially cold-blooded killer.

He married Alison Telfer in 1970. They had two children before divorcing in 2012. They had long had an open marriage. Jones had a daughter, Siri, in 2009 with Anna Söderström, 41 years his junior. They married in 2012.

In 2015 he was diagnosed with primary progressive aphasia, a form of dementia that impairs the ability to speak and communicate.  By September 2016 he was no longer able to give interviews. In 2017 Palin revealed that Jones was no longer able to speak. He died 11 days short of his 78th birthday at his London home. (D. 2020)

There are Jews in the world, there are Buddhists,
There are Hindus and Mormons and then
There are those that follow Mohammed, but
I've never been one of them.

I'm a Roman Catholic,
And have been since before I was born,
And the one thing they say about Catholics is
They'll take you as soon as you're warm.

Let the heathen spill theirs,
On the dusty ground,
God shall make them pay for
Each sperm that can't be found.

Hindu, Taoist, Mormon,
Spill theirs just anywhere,
But God loves those who treat their
Semen with more care.

Let the pagans spill theirs,
O'er mountain, hill and plain.
God shall strike them down for
Each sperm that's spilt in vain.

—"Every Sperm is Sacred," song and words by Michael Palin and Terry Jones (1983) 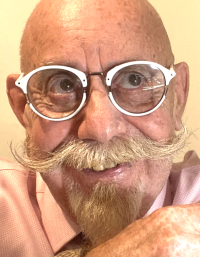 On this date in 1947, journalist/editor and gay rights activist Barry Duke was born in Johannesburg, South Africa, the eldest child of middle-class parents Sybil and Abe Duke. He grew up in two small towns, and from an early age showed "a strong antipathy toward religion, especially the Calvinist form of Christianity that was used to justify the country's horrific persecution of people of color during the Apartheid era," Duke commented in 2022.

He was expelled from the first high school he attended for condemning racial injustices, refusing to sing the national anthem and for sharing anti-religious publications with classmates. He started working as a newspaper journalist in his late teens and several years later landed a job with The Star, a leading daily.

Duke's left-leaning, anti-Apartheid activism, coupled with censorship battles, led to him being declared a "dangerous undesirable." Alerted that an arrest warrant was being issued, he left South Africa in 1973 for the UK, where he was granted asylum. A militant atheist, he joined the National Secular Society and was a co-founder in 1979 of the Gay Humanist Group, which changed its name to the Gay and Lesbian Humanist Association in 1987.

He started writing in 1974 for The Freethinker, the venerable publication founded by G.W. Foote in 1881, and rose to editor in 1997. He held the position until January 2022, when differences with the editorial board led to his departure. He continued his decade-long writing and editing association with the Pink Humanist and started writing on OnlySky, a secular platform that launched in 2020.

In 2017 Duke was the recipient of a Lifetime Achievement Award from the National Secular Society for his "spirited opposition to religious intolerance and irrationality." He married Marcus Robinson, his longtime partner, in 2017 in Gibraltar and they live in Benidorm, a town along Spain's seaside Costa Blanca.

"Since [1950s John Birch Society claims], War on Christmas reports have simply become a silly festive season tradition, generating more mirth than fury. All are intended to reinforce the belief of Christian fundamentalists that they really are being persecuted by a coalition of atheists, secularists, freethinkers, abortionists – and those who identify as LGBTQ. Seriously!" 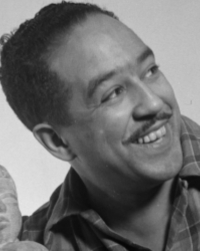 On this day in 1901, Langston Hughes was born in Joplin, Mo. (Research belatedly found in 2018 that Hughes, who had claimed to be born in 1902, had shaved a year off of his age.) For four decades he chronicled the black experience and perspective in powerful poetry, fiction, nonfiction and children's books. The Nation magazine published his influential essay "The Negro Artist and the Racial Mountain" (1926), in which Hughes advocated racial pride and independent artistry, giving the Harlem Renaissance its due. He enrolled at Columbia University and finished his degree at Lincoln University in Oxford, Pa., in 1926.

His first book of poetry was The Weary Blues, his first novel was Not Without Laughter (1930) and his first book of short stories was The Ways of White Folks. His play Mulatto (1935) ran successfully on Broadway. His autobiography, The Big Sea, came out in 1940, followed in 1956 by I Wonder As I Wander. Among his many other books was Jim Crow's Last Stand (1943).

Hughes' satire on corruption in black storefront churches, Tambourines to Glory (1963), was not popular with black clergy. Hughes, who traveled widely all his life, had visited the Soviet Union and was forced to appear before a congressional committee in 1953 duing the "Red scare." He wrote a column for 20 years for the Chicago Defender.

Hughes had a complicated relationship with religion, according to Wallace Best, author of Langston’s Salvation: American Religion and the Bard of Harlem (2017).  Hughes strongly disagreed with characterizations of him as anti-religious or atheist while reserving the right to criticize dogma and the Christian church. Best called him a “thinker about religion.”

He never married and was generally seen by contemporaries and later by scholars and critics as gay or perhaps asexual. He died in New York City at age 66 from complications after abdominal surgery related to prostate cancer. (D. 1967)

Listen, Christ,
You did alright in your day, I reckon—
But that day's gone now.
They ghosted you up a swell story, too,
Called it Bible—
But it's dead now.
The popes and the preachers've
Made too much money from it.
They've sold you to too many.