There are 2 entries for this date: Robert Redford and Tom Flynn 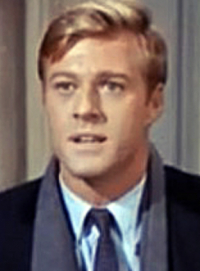 On this date in 1936, Charles Robert Redford Jr., who would become an iconic actor, director, producer, environmentalist, entrepreneur and philanthropist, was born in Santa Monica, Calif. "Growing up in a working-class world in Los Angeles, I had no luxuries or entertainment. I was ashamed to have people come to our house," he told Playboy in November 2007. He had some youthful run-ins that lost him a baseball scholarship at the University of Colorado in 1957.

As a student at the American Academy of Dramatic Art in New York, he made his stage debut in the comedy "Tall Story." His movie debut was "War Hunt" (1962). He starred in "Barefoot in the Park" on Broadway in 1962, finding fame after reprising that role on screen five years later. His role in "Inside Daisy Clover" (1965) won him a Golden Globe for the best new star.

He made a cameo appearance in 2019's "Avengers: Endgame," in which he reprised his role from 2014's "Captain America." "Avengers" replaced "Avatar" as the highest-grossing film of all time. In July 2019 it was announced that he would come out of retirement to play President Robert Redford, a fictionalized version of himself, in the HBO drama series "Watchmen."

Redford has used his celebrity to further environmental and progressive causes, founding the Sundance Film Festival and the Sundance Film Institute in Utah for independent filmmakers, as well as Sundance Cinemas. He married Lola Van Wagenen in 1958, which ended in divorce in 1985. Their children are Amy (1970), James (1962), Shauna (1960) and Scott (1959, who died shortly after birth). Redford married German painter Sibylle Szaggars in 2009.

His honors include an award from the Kennedy Center (2005), The American National Medal of Arts (1969) and the 2002 Oscars Lifetime Achievement Award.

PLAYBOY: Do you believe in an afterlife?
REDFORD: I'm not sure I do. I've explored every religion, some very deeply, enough to know there's not one philosophy that can satisfy me. Problems can't be solved with one way of thinking. If anything is my guide, nature is. That's where my spirituality is. I don't believe in organized religion, because I don't believe people should be organized in how they think, in what they believe. That has never been driven home as hard as with the [Bush] administration. When somebody thinks God speaks to him, you've got trouble. If God is speaking to the president, he's speaking with a forked tongue, because the behavior of this administration doesn't seem very godlike or spiritual. ... Is there an afterlife? As far as I know, this is it. It's all we’ve got. You take your opportunities and you go for it. 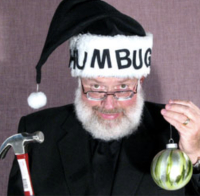 On this date in 1955, author and editor Thomas W. Flynn was born to Sally (McCarty) and Richard Flynn in Erie, Pa. He was the only child of two only children who "kept a fairly strict Catholic household," he later said. He earned a bachelor's degree at Xavier University, a Jesuit school in Cincinnati, before renouncing Catholicism while living in Milwaukee and reading the Dresden Edition of "The Works of Robert G. Ingersoll" ("The Trouble With Christmas" by Tom Flynn)

Flynn worked as a corporate and industrial filmmaker and as an advertising account executive. He volunteered with the Council for Democratic and Secular Humanism (later the Council for Secular Humanism) in Buffalo, N.Y. He joined council staff in 1989, was named editor of Free Inquiry in 2000 and became executive director in 2009. He designed and directed the Robert Ingersoll Birthplace Museum, which opened in 1993 at Ingersoll's home in Dresden, N.Y.

In "The Trouble with Christmas" (1993), described as a "deep dive into Christian history," Flynn said he "pulled the plug on Christmas" in 1984. One chapter is titled "The Babe and the Bathwater." In a "Point of Inquiry" interview (Nov. 14, 2011), he said, "If you’re a serious atheist and you know, you no longer worship the babe, sooner or later you let go of the bathwater, and that’s what I did.”

“What do you do on Christmas?” was one of the four recurring questions Flynn got from Christian challengers. The others: 1.) If there’s no god, how did you/living things/the universe get here? 2.) If there’s no hell, what keeps you from robbing/raping/killing to your heart’s content? 3.) Without a supernatural order, isn’t your life drab and meaningless? (Blog entry, "A Seasonal Reflection," Dec. 16, 2016)

Flynn blogged for the Center for Inquiry as “Advocatus Diaboli” from 2008 to 2017. He wrote two satirical science fiction novels: "Galactic Rapture" (2000), about the rise of a false messiah on a ruined, quarantined world, and its sequel four years later, "Nothing Sacred." He edited "The New Encyclopedia of Unbelief" (897 pages, 2007).

He died unexpectedly at age 66 while living with his wife Susan Gibbons in Williamsville, N.Y. (D. 2021)

"Christmas agglomerates post-Christian 'extras' faster than a ball of rubber cement rolling down a hillside of loose scabs."

—from "Confessions of an Anti-Claus," in which Flynn argues against even pagan observances like the winter solstice. (The Secular Humanist Bulletin, Winter 1992)