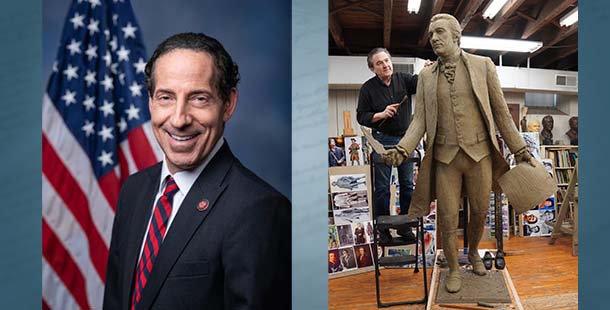 Please ask your member of Congress to support a just-introduced HR 6720, a bill to memorialize America’s “forgotten Founder” Thomas Paine in Washington, D.C.

U.S. Rep. Jamie Raskin, co-chair of the Congressional Freethought Caucus, introduced legislation today to authorize the construction of a long-overdue D.C. memorial to Paine, noting: “Despite his catalytic role in founding America and our constitutional republic, Paine remains too often on the dark outskirts of history. It is way past time for Congress to give Paine the central place of respect and awe he deserves in our nation’s capital."

This noncontroversial bill is one that members of Congress on both sides of the aisle can unite over. Without Paine, the United States of America would not exist. His writings in Common Sense and Crisis made the case for American independence and sparked the American Revolution. To freethinkers he is revered as the author of The Age of Reason, to freedom lovers everywhere for proclaiming “The world is my country” and for working to advance freedom, equality and democracy.

Please take a moment to use our automated system to send a message to your members of Congress today. (Feel free to personalize the message or edit as you wish.)

As your constituent, I am asking for your support and co-sponsorship of a new congressional bill to approve a memorial in Washington, D.C., for “forgotten Founder” Thomas Paine. The bill to memorialize patriot and Revolutionary War veteran Thomas Paine is one that every American and member of Congress can unite behind. Paine’s very words in Common Sense and the Crisis papers sparked and nurtured the Revolutionary War. A visionary of modern democracy, liberty and justice, Paine embodied the words in our Declaration of Independence. It is past overdue to recognize him with a D.C. memorial. May I count on your office to co-sponsor the bill to approve a Thomas Paine Memorial? Public funds will not be utilized.