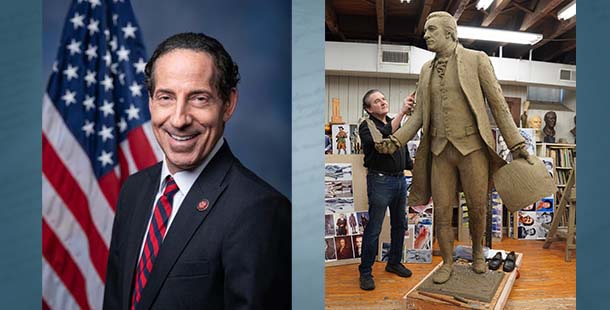 The Freedom From Religion Foundation is grateful that Rep. Jamie Raskin, D-Md., has introduced legislation today, HR 6720, to authorize the construction of a long overdue memorial to Thomas Paine.

“Tom Paine was a person so far ahead of his time that his work still challenges us in significant ways today to build a more democratic society,” says Raskin. “This luminary patriot of the Enlightenment and the American Revolution inspired people in the colonies not only to overthrow the tyranny of faraway kings but to launch a nation founded on principles of democratic self-government, the rights of men and of women, and reason and science. Despite his catalytic role in founding America and our constitutional republic, Paine remains too often on the dark outskirts of history. It is way past time for Congress to give Paine the central place of respect and awe he deserves in our nation’s capital. This memorial to Paine — amazingly, already pre-funded with a flood of voluntary contributions and pledges from private citizens — will be a powerful and dramatic addition to the symbolic life of Washington, D.C.”

The legislation will authorize the Thomas Paine Memorial Association to establish the commemorative work in the District of Columbia. The association is working with renowned sculptor Zenos Frudakis, and the statue will be paid for through private funds. The Thomas Paine Memorial Association is the recipient of a very generous matching gift from Todd Stiefel and the Stiefel Freethought Foundation.

“We can think of no one better suited to champion the resolution to dedicate a memorial to our ‘Forgotten Founder’ Thomas Paine than Rep. Jamie Raskin,” comments Annie Laurie Gaylor, FFRF co-president and co-founder who serves as the secretary of the Thomas Paine Memorial Association. “Raskin embodies Paine’s dedication to reason, democracy, liberty and humanistic values. We are honored to be working with him to help restore Thomas Paine to his rightful place in our country’s history.”

Margaret Downey, Thomas Paine Memorial Association president and founder of the Freethought Society, says, “Long neglected, Paine stands as the embodiment of the Declaration of Independence, and his Crisis papers were the spark that won the American Revolution. A statue of Thomas Paine will bring attention to the fundamental principles of the country, and serve as a source of unity of our founding principles.”

Robyn Blumner, who is vice president of the association and CEO of Center For Inquiry, sends her “thank you to members of Congress who seek to correct this historical oversight.”

The bill has attracted the endorsement of Harvey J. Kaye, author of Thomas Paine: Firebrand of Revolution and Thomas Paine and the Promise of America, who states: “With good reason Americans in every generation have claimed Paine as their champion as they sought to advance freedom, equality and democracy in the United States.”

The Freedom From Religion Foundation is asking its 35,000-plus-membership to enlist sponsorship and support of the bill from their senators and members of Congress.