The Freedom From Religion Foundation has put an end to Chick-fil-A's biased, unconstitutional church bulletin promotion.

A Chick-fil-A restaurant in Jacksonville, Fla. offered a promotion to patrons who brought in a church bulletin on the Monday after the service. Church-going customers received a free eight nugget or Chick-fil-A sandwich with the purchase of a side and drink. FFRF Staff Attorney Stephanie Schmitt wrote an Oct. 5, 2011, letter to Chick-fil-A owner Jeff Wier, advising him to put a stop to his discriminatory discounts. Schmitt pointed out that Florida's Civil Rights Act strictly warns against public discrimination based on religion.

Wier wrote to Schmitt on Jan. 18: "Stephanie, we are discontinuing the promotion effective 1-31-12." 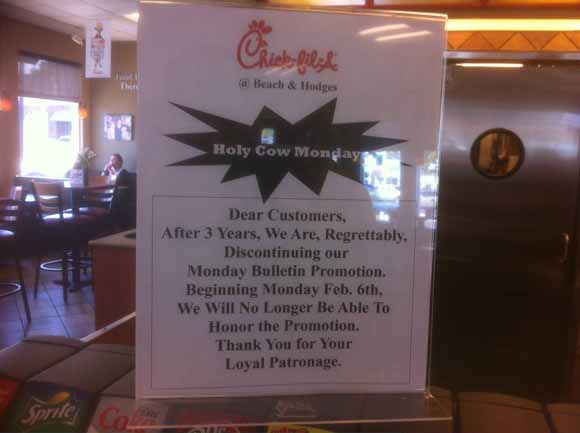