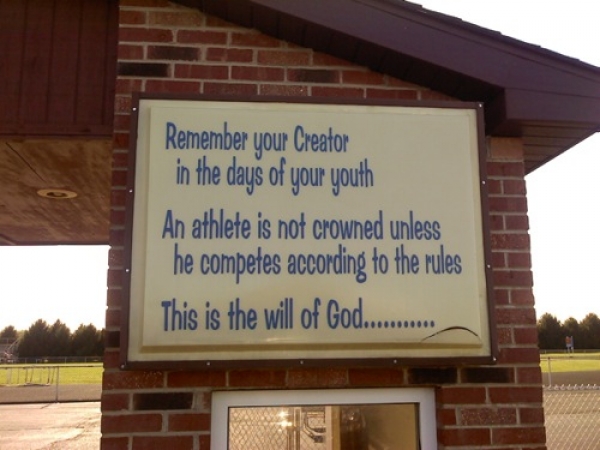 In response to a letter of complaint from FFRF, a religious sign will be removed from the grounds of a Cayuga, Ind. school. In May 2011, FFRF was informed that a religious sign was posted on the grounds at North Vermillion Junior/Senior High School in Cayuga. The sign was affixed to the entrance gate of the athletic fields, which is located between the school and the fields. The sign contained two bible quotes, one from Ecclesiastes 12:1 and one from 2 Timothy 2:5. The sign read:

Remember your Creator in the days of your youth
An athlete is not crowned unless he competes according to the rules
This is the will of God...........

FFRF Staff Attorney Patrick Elliott wrote a letter of complaint to North Vermillion Community Schools Superintendent Mike Turner, informing him that the sign was unconstitutional. Elliott wrote, "North Vermillion Schools may not display Christian or other religious messages on school grounds. It is unconstitutional for the school to send a biblical message to students that it is 'the will of God' to 'remember your creator.' This is precisely the type of message that public schools are not allowed to endorse."

On June 22, 2011, Superintendent Turner responded, "An acceptable replacement sign is being designed and will be made to replace the challenged signage. My timeline is to have the replacement sign in place before school starts for the 2011-2012 school year."