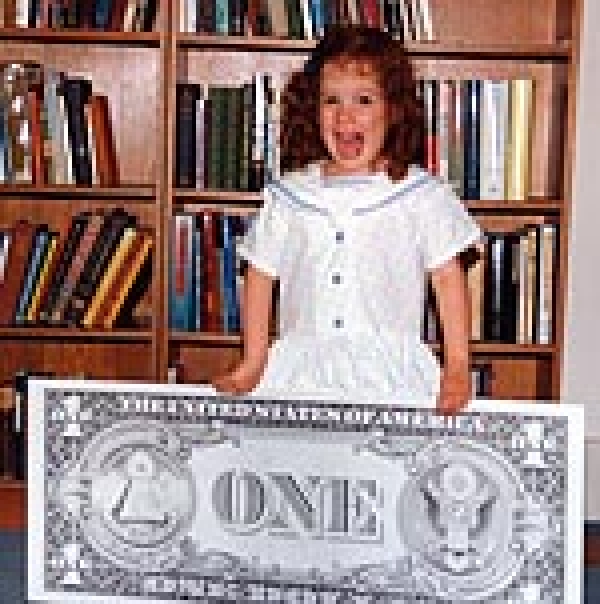 Sabrina Gaylor with blow-up of \" Money to Enhance Catholic Seminary"

After numerous requests by its membership, the Freedom From Religion Foundation, with its attorney Robert R. Tiernan, went to federal court in Denver challenging "In God We Trust." The Freedom From Religion sued the federal government in 1994 to have "In God We Trust" removed from currency and as our national motto. The motto was put on all paper currency by an Act of Congress in 1955. The phrase was chosen as our national motto by an Act of Congress in 1956. It first appeared on paper currency in 1957.

As evidence that the "God" motto is considered an endorsement of religion by the public, the Foundation commissioned an independent national survey. Sixty-one percent consider "In God We Trust" religious, and 71% believe it endorses a belief in God. A majority also regard the motto as preferring religion over nonreligion. (Chamberlain Research, poll of 900 adults, conducted May 18-23, 1994)

The Foundation lawsuit was dismissed by a 10th Circuit federal judge on the grounds that "In God We Trust" is not a religious phrase (1994). The Foundation appealed the dismissal to the U.S. Supreme Court, which did not take the case in 1996.