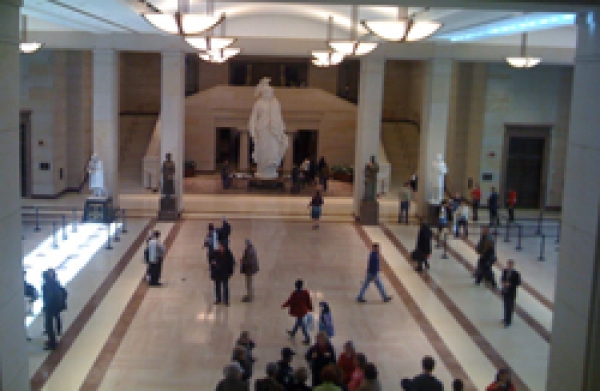 The Foundation and its Co-Presidents filed suit on July 14, 2009, to stop the prominent engraving of "In God We Trust" and the religious Pledge of Allegiance at the Capitol Visitor Center in Washington D.C. The lawsuit was filed by attorney Richard Bolton in U.S. District Court in the western district of Wisconsin. The House and the Senate passed resolutions in July 2009 directing the Architect of the Capitol to engrave the mottos, with an expected cost of at least $100,000. Religious members of Congress had threatened to delay the opening of the Visitors Center, through which every visitor to the Capitol must now pass, unless "God is welcomed back into the Center." The Foundation contends that the motto, "In God We Trust," is a johnny-come-lately, usurping the original, secular "E Pluribus Unum" (from many, come one), only adopted during the Red Scare in the 1950s. Similarly, the once secular pledge was tampered with by Congress in 1954, when it added "under God" wording.