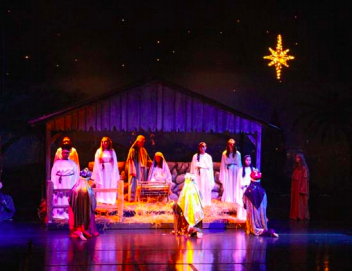 On October 7, 2015, the Freedom From Religion Foundation, the American Civil Liberties Union, and the ACLU of Indiana filed a federal lawsuit, along with a local parent and student, challenging an annual live nativity performance at Concord High School in Elkhart, Indiana.

The complaint noted that for several decades, Concord High School organized a "Christmas Spectacular" each winter. Every performance, of which there were five in 2014, "ends with an approximately 20-minute telling of the story of the birth of Jesus, including a live Nativity Scene and a scriptural reading from the Bible. During this segment, students at the High School portrayed the Virgin Mary, Joseph, the Three Wise Men, shepherds, and angels."

Attorneys for FFRF and the ACLU argued in the complaint that the nativity performance and the reading of the biblical story of the birth of Jesus are, of course, "well-recognized symbols of the Christian faith. Their presence at the Christmas Spectacular is coercive, represents an endorsement of religion by the High School and the School Corporation, has no secular purpose, and has the principal purpose and effect of advancing religion."

On Sept. 14, 2016, Judge Jon DeGuilio ruled that the school district had adequately changed its performance so as not to violate the Establishment Clause. A nativity scene still appeared on stage at the 2015 Christmas Spectacular, but it did not include live student performers or a broadcast narrative of the biblical story of the birth of Jesus. It appeared for less than 2 minutes, rather than 20 as in previous years.

On March 6, 2017, DeGuilio struck down the nativity performance as it had existed for almost half a century, whereby the school produced and staged 20-minute depictions by students of the story of the birth of Jesus while staff read from New Testament passages. The court issued a declaratory judgment that the nativity performances were unconstitutional.

"The manner in which the living nativity scene was presented and its context within the show combined to create an impermissible message of [religious] endorsement," U.S. District Judge Jon DeGuilio ruled. "The school's present filings offer no argument in defense of the constitutionality of this version of the show.” However, the judge ruled it was permissible for the school to place a static nativity display on stage during the “Christmas Spectacular.” FFRF and the ACLU appealed that portion of the ruling, asserting that there is no legal precedent to permit schools to promote Christian devotional scenes, particularly with the Concord school’s history of flouting the First Amendment. Concord filed a cross-appeal on March 31, 2017. Concord submitted its brief on appeal in May, 2017 with FFRF and the ACLU submitted their brief on appeal in June. Oral arguments were held before the 7th Circuit Court of Appeals on October 31, 2017.

On May 23, 2018, the 7th Circuit Court of Appeals affirmed the lower court ruling in favor of FFRF and its plaintiffs, ruling that the live nativity pageant practice was unconstitutional. The appeals court, however, declined to rule against the new practice involving a less than 2-minute appearance of a nativity scene with mannequins during the school concert. FFRF and its plaintiffs won the major portion of the lawsuit, ending a longstanding and egregious violation in the public school district, in what it termed more than a partial victory.

FFRF brought suit in conjunction with the ACLU of Indiana and the national ACLU. Attorneys on the case included Sam Grover and Ryan Jayne of FFRF, Gavin Rose of the ACLU of Indiana, and Daniel Mach and Heather L. Weaver of the ACLU. FFRF v. Concord Community Schools, Case No. 3:15-cv-00463, was in the U.S. District Court for the Northern District of Indiana, South Bend Division and assigned to Judge Jon DeGuilio.