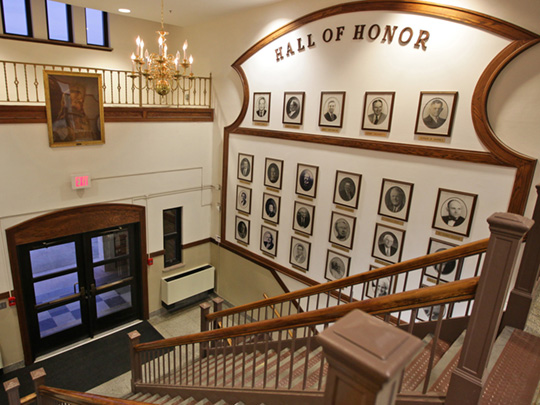 The Freedom From Religion Foundation and the American Civil Liberties Union of Ohio filed a lawsuit on Feb. 3, 2013, on behalf of plaintiffs who seek removal of a portrait of Jesus from Jackson Middle School in Jackson. Doe 1, Doe 2 and Doe 3 are suing the Jackson City School District and others to remove the portrait from the public school, which school authorities refused to remove. Plaintiffs were offended by the religious portrait, its usurpation of parental authority and its violation of the Establishment Clause. A strong memorandum was filed seeking a protective order to protect the identity of the students and parents, which was almost immediately granted by the judge. The federal lawsuit was in the court of U.S.District Judge Algrnon Marbley, a Clinton appointee. The portrait was moved from the middle school to the high school after the suit was filed. The school district worked with the Liberty Institute, a religious right group, which proclaimed at its website: “We have never lost a case to the ACLU, [or] Freedom From Religion Foundation,” even though this was FFRF’s first case in which the Liberty Institute interceded. The superintendent announced that it would take a court order to remove the painting, and that’s what he got.

The federal lawsuit was victoriously settled with a consent degree on Oct. 4, 2013. The court order mandated permanent removal of the portrait and parties agreed to a financial settlement requiring the school to pay the plaintiffs a combination of damages and legal fees totaling $95,000. Each of the plaintiffs, parents and students, received $3,000 in claims and damages. “It’s just and appropriate that students and parents who risk public exposure and threats of retaliation for speaking up for the First Amendment should receive damages and that public school officials who violate the First Amendment be held accountable,” said FFRF Co-President Annie Laurie Gaylor. The case number is: 2:13-cv-112.