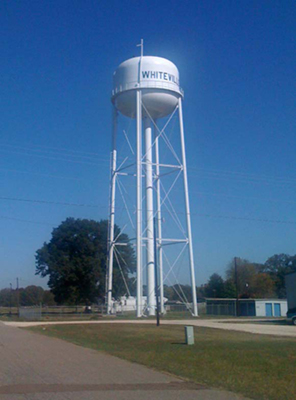 The Freedom From Religion Foundation filed a federal lawsuit against the Town of Whiteville, Tenn., and its mayor, James Bellar, to force him to remove crosses on the Whiteville water tower, in front of Whiteville City Hall and on the city-owned sidewalk. FFRF began complaining about a prominent lighted cross atop its water tower in 2010 on behalf of an area resident offended by the town's message of endorsement of Christianity. After writing three unanswered letters of complaint, FFRF, with Tennessee attorney Alvin Harris, sent a letter of demand on Sept. 29, 2011, warning Bellar if he didn't move the cross, FFRF would sue by the end of the month. Bellar announced on Oct. 3 that he would move the cross, although he referred to FFRF and its members as "terrorists" in local media reports. On Oct. 17, Bellar told reporter Daniel Wilkerson, WBBJ-TV in Jackson, Tenn., that "Somebody has to stand up to these atheist sons of bitches, and you can quote me on that." In late October, Bellar used nearly $4,000 in taxpayer money to hire a crane service to inexplicably break one arm of the cross. Then the town began lighting what remained of the cross. On or about Nov. 28, 2011, the town installed two large crosses in front of Whiteville City hall. On or around Nov. 30, defendants decorated the crosses with Christmas wreathes. FFRF is suing on behalf of a member who regularly comes into unwelcome contact with the town displays of crosses.

On Aug. 8, 2012, Judge Daniel Breen approved a settlement between the parties and entered an agreed judgment. The Town and Mayor were enjoined from installing crosses on city hall property. The defendants also agreed not to replace the cross arm on the remaining structure of the water tower. The Town agreed to pay $20,000 to pay FFRF's attorney's fees.