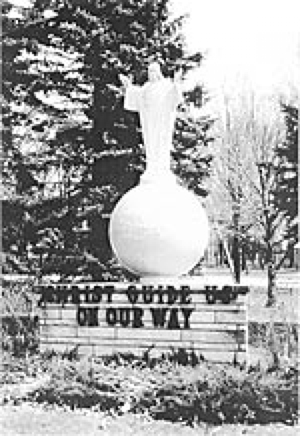 The Freedom From Religion Foundation's two-and-a-half year court battle over a shrine to Jesus in a public park in Wisconsin concluded in November 2000 with the erection of a 4-foot, wrought-iron fence and two "private property" signs around the statue. The Foundation, with Clarence Reinders of Marshfield as plaintiff, filed suit in 1998 after receiving complaints by residents and motorists about a Jesus statue dominating a public wayside park, reading "Christ Guide Us On Our Way." The statue had been given to the town by the Knights of Columbus in the 1950s. The Foundation's lawsuit was initially dismissed by Shabaz after the city sold a prime parcel of the park to a group formed expressly to save the statue.

The 7th Circuit Court of Appeals in Chicago agreed with the Foundation that the sale did not remedy the violation, because there was no wall or sign indicating the statue is now on private land. A three-judge panel ordered Shabaz to oversee the erection of a wall or fence with a visible disclaimer.

In 2017, the City of Marshfield began to tax the property after FFRF informed the city that it was required to assess and tax the shrine plot since it is not tax-exempt. 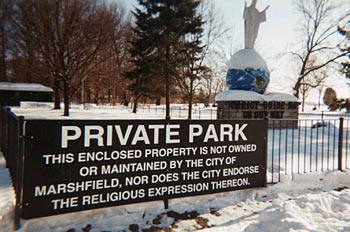