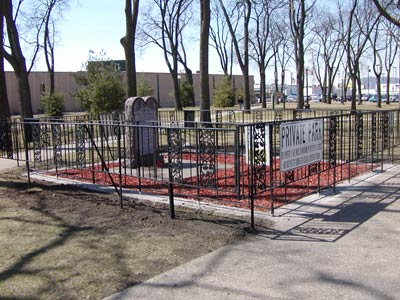 In February 2004, the Freedom From Religion Foundation won its challenge of a Ten Commandments monument in a public park in La Crosse, Wis., and the city's convoluted attempt to sell a small bite of the park to the Fraternal Order of Eagles in order to maintain the monument in the same park. Federal Judge Barbara Crabb of the Western District of Wisconsin noted: "It borders on preposterous to argue that the government can avoid an establishment clause violation by 'dedicating' a religious object to a nonreligious group. Adopting such a view would permit municipalities to erect crosses and build churches on public property throughout the city so long as it could think of a new group to which it could dedicate each one." The city and the Fraternal Order of Eagles, represented by television evangelist Pat Robertson's legal group, have appealed the ruling to the 7th U.S. Circuit Court of Appeals.

On Jan. 3, 2005, a 3-judge panel of the U.S. 7th Circuit Court of Appeals partially overturned Judge Crabb, approving the sale of city land to the Eagles to explicitly maintain the decalog in the same spot. Judge Crabb's main ruling that display or ownership of the Ten Commandments by a city is unconstitutional was not overturned, thus the bible edict remains on private property. Dissenting appellate Judge Bauer called the city sale of the park a "sham" bordering on "fraud":

In 2018, the City of La Crosse began to tax the property after FFRF informed the city that it was required to assess and tax the monument plot since it is not tax-exempt.