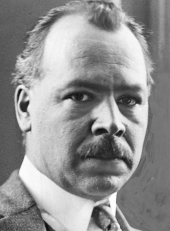 On this date in 1887, Russian geneticist and agronomist Nikolai Ivanovich Vavilov was born to a merchant family of modest means in Moscow. His older brother Sergey would become a renowned physicist.

He graduated from the Moscow Agricultural Institute in 1910, then worked at the Bureau for Applied Botany and the Bureau of Mycology and Phytopathology. In 1913-14 he traveled in Europe and studied plant immunity with British biologist William Bateson, who helped establish the science of genetics.

From 1917-20 he was an agronomy professor at the University of Saratov. His son Oleg (with his first wife Yekaterina Sakharova) was born in 1918.From 1924-35 he directed the Lenin All-Union Academy of Agricultural Sciences in Leningrad. His marriage ended in divorce in 1926, after which he married geneticist Elena Ivanovna Barulina. Their son Yuri was born in 1928.

While developing his theory on the origin of cultivated plants, Vavilov organized a series of expeditions that eventually collected over 250,000 seeds and roots from around the world and were stored in Leningrad. His work ran counter to that of Trofim Lysenko, whose anti-Mendelian concepts of plant biology had won favor with dictator Joseph Stalin. Lysenko's ascent was due to his promise of quick crop improvement compared to Vavilov's slower process of hybridization, testing and selection.

Vavilov refused to follow the politically expedient path and was arrested in 1940 and sentenced to death in July 1941, though the sentence was later reduced to 20 years in prison, where he died in 1943 at age 55. The death certificate listed "decline of cardiac activity" but some authors asserted the actual cause of death was starvation.

He was posthumously pardoned by Nikita Khrushchev during de-Stalinization, when his reputation was publicly rehabilitated and he began to be hailed as a hero of Soviet science. In 1993, the 50th anniversary of his death, James F. Crow, an evolutionary biologist and population geneticist at the University of Wisconsin-Madison, wrote an article titled "N.I. Vavilov, Martyr to Genetic Truth" in the journal of the Genetics Society of America.

Crow wrote: "Vavilov was a strong believer in the importance of selection, both for evolution and as a tool for the plant breeder. Finding diverse types, hybridizing them, and especially selecting among the recombinants, gave the best hope for producing better plants. And, of course, he was right. But the slow and certain program he was advocating could not compete in the political arena with those who promised instant gratification. Here lies a lesson for all science."

"Despite his strict upbringing in the Orthodox Church, Vavilov had been an atheist from an early age. If he worshipped anything, it was science."

—"The Murder of Nikolai Vavilov: The Story of Stalin's Persecution of One of the Great Scientists of the Twentieth Century" by Peter Pringle (2008)