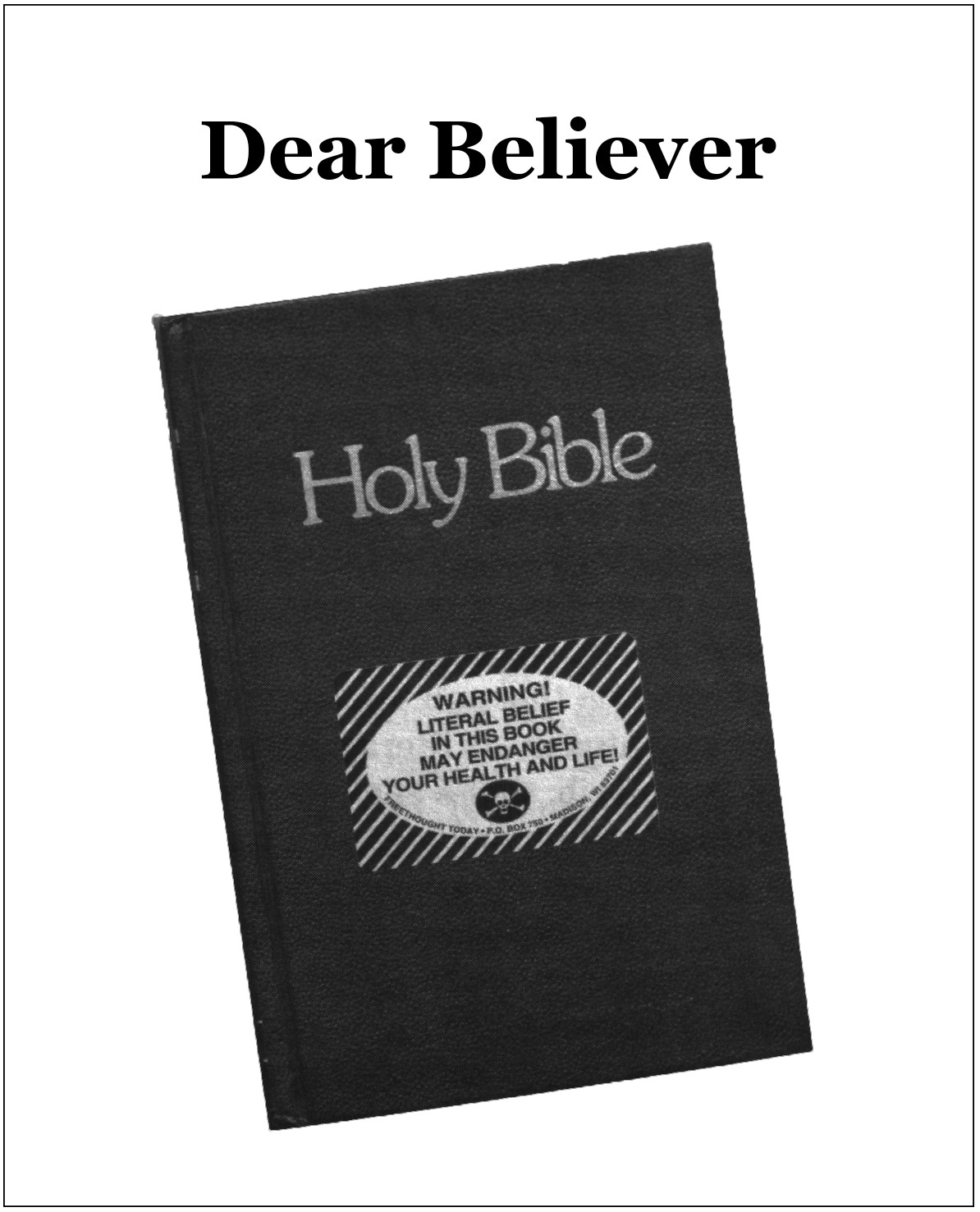 You ask me to consider Christianity as the answer for my life. I have done that. I consider it untrue, repugnant, and harmful.

You expect me to believe Jesus was born of a virgin impregnated by a ghost? Do you believe all the crazy tales of ancient religions? Julius Caesar was reportedly born of a virgin; Roman historian Suetonius said Augustus bodily rose to heaven when he died; and Buddha was supposedly born speaking. You don't believe all that, do you? Why do you expect me to swallow the fables of Christianity?

I find it incredible that you ask me to believe that the earth was created in six literal days; that women come from a man's rib; that a snake, a donkey, and a burning bush spoke human language; that the entire world was flooded, covering the mountains to drown evil; that all animal species, millions of them, rode on one boat; that language variations stem from the tower of Babel; that Moses had a magic wand; that the Nile turned to blood; that a stick turned into a snake; that witches, wizards, and sorcerers really exist; that food rained from the sky for forty years; that people were cured by the sight of a brass serpent; that the sun stood still to help Joshua win a battle, and it went backward for King Hezekiah; that men survived unaided in a fiery furnace; that a detached hand floated in the air and wrote on a wall; that men followed a star which directed them to a particular house; that Jesus walked on water unaided; that fish and bread magically multiplied to feed the hungry; that water instantly turned into wine; that mental illness is caused by demons; that a "devil" with wings exists who causes evil; that people were healed by stepping into a pool agitated by angels; that disembodied voices spoke from the sky; that Jesus vanished and later materialized from thin air; that people were healed by Peter's shadow; that angels broke people out of jail; that a fiery lake of eternal torment awaits unbelievers under the earth. . . while there is life-after-death in a city which is 1,500 miles cubed, with mansions and food, for Christians only.

If you believe these stories, then you are the one with the problem, not me. These myths violate natural law, contradict science, and fail to correspond with reality or logic. If you can't see that, then you can't separate truth from fantasy. It doesn't matter how many people accept the delusions inflicted by "holy" men; a widely-held lie is still a lie. If you are so gullible, then you are like the child who believes the older brother who says there is a monster in the hallway. But there is nothing to be afraid of; go turn on the light and look for yourself.

If Christianity were simply untrue I would not be too concerned. Santa is untrue, but it is a harmless myth which people outgrow. But Christianity, besides being false, is also abhorrent. It amazes me that you claim to love the god of the bible, a hateful, arrogant, sexist, cruel being who can't tolerate criticism. I would not want to live in the same neighborhood with such a creature!

The biblical god is a macho male warrior. Though he said "Thou shalt not kill," he ordered death for all opposition (Ex. 32:27), wholesale drowning and mass exterminations; punished offspring to the fourth generation (Ex. 20:5); ordered babies to be smashed and pregnant women to be ripped up (Hosea 13:16); demanded animal and human blood to appease his angry vanity; is partial to one race of people; judged women inferior to men; is a sadist who created a hell to torture unbelievers; created evil (Is. 45:7); discriminated against the handicapped (Lev.21:16-23); ordered virgins to be kept as spoils of war (Num. 31:15-18, Deut. 21:11-14); threatened to curse people by spreading dung on their faces (Malachi 2:3); sent bears to devour forty-two children who teased a prophet (II Kings 2:23-24); punished people with snakes, dogs, dragons, drunkenness, swords, arrows, axes, fire, famine, and infanticide; and said father should eat their sons (Ez. 5:10). Is that nice? Would you want to live next door to such a person?

And Jesus is a chip off the old block. He said, "I and my father are one," and he upheld "every jot and tittle" of the Old Testament law. (Matt 5:18). He preached the same old judgment: vengeance and death, wrath and distress, hell and torture for all nonconformists. He believed in demons, angels and spirits. He never denounced the subjugation of slaves or women. Women were excluded as disciples, and as guests at his heavenly table. Except for hell he introduced nothing new to ethics or philosophy. He was disrespectful to his mother and brothers; he said we should hate our parents and desert our families. Matt. 10:35-36, Luke 14:26 (So much for "Christian family life.") He denounced anger, but was often angry himself. Matt. 5:22, Mark 3:5 He called people "fools" (Matt. 23:17,19), "serpents," and "whited sepulchres," though he warned that such language puts you in danger of hellfire. Matthew 5:22 He said, "Think not that I am come to send peace on earth. I came not to send peace, but a sword." Matt. 10:34. (So much for "Peace on earth.") He irrationally cursed and withered a fig tree for being barren out of season. Matt. 21:19. He mandated burning unbelievers. John 15:6 (The Church has complied with relish.) He stole a horse. Luke 19:30-33. He told people to cut off hands, feet, eyes and sexual organs. Matt. 5:29-30, 19:12 You want me to accept Jesus, but I think I'll pick my own friends, thank you.

One of Jesus's many contradictions was saying good works should be seen, and not seen. Matt. 5:16, 6:1-4 One of his mistakes was saying that the mustard plant has the smallest seed. Matt 13:31-32. The writers of Matthew and Luke could not even get his genealogy straight, contradicting the Old Testament, and giving Jesus two discrepant lines through Joseph, his non-father! (Matt. 1:1-16 vs. Luke 3:23-34).

I also find Christianity to be morally repugnant. The concepts of original sin, depravity, substitutionary forgiveness, intolerance, eternal punishment, and humble worship are all beneath the dignity of intelligent human beings and conflict with the values of kindness and reason. They are barbaric ideas for primative cultures cowering in fear and ignorance.

Finally, Christianity is harmful. More people have been killed in the name of a god than for any other reason. The Church has a shameful, bloody history of Crusades, Inquisitions, witch-burnings, heresy trials, American colonial intolerance, disrespect of indigenous traditions (such as American Indians), support of slavery, and oppression of women. Modern "fruits" of religion include the Jonestown massacre, the callous fraud of "faith healers," the sex scandals of televangelists, and fighting in Northern Ireland. Religion also poses a danger to mental health, damaging self-respect, personal responsibility, and clarity of thought.

Do you see why I do not respect the biblical message? It is an insulting bag of nonsense. You have every right to torment yourself with such insanity- but leave me out of it. I have better things to do with my life.