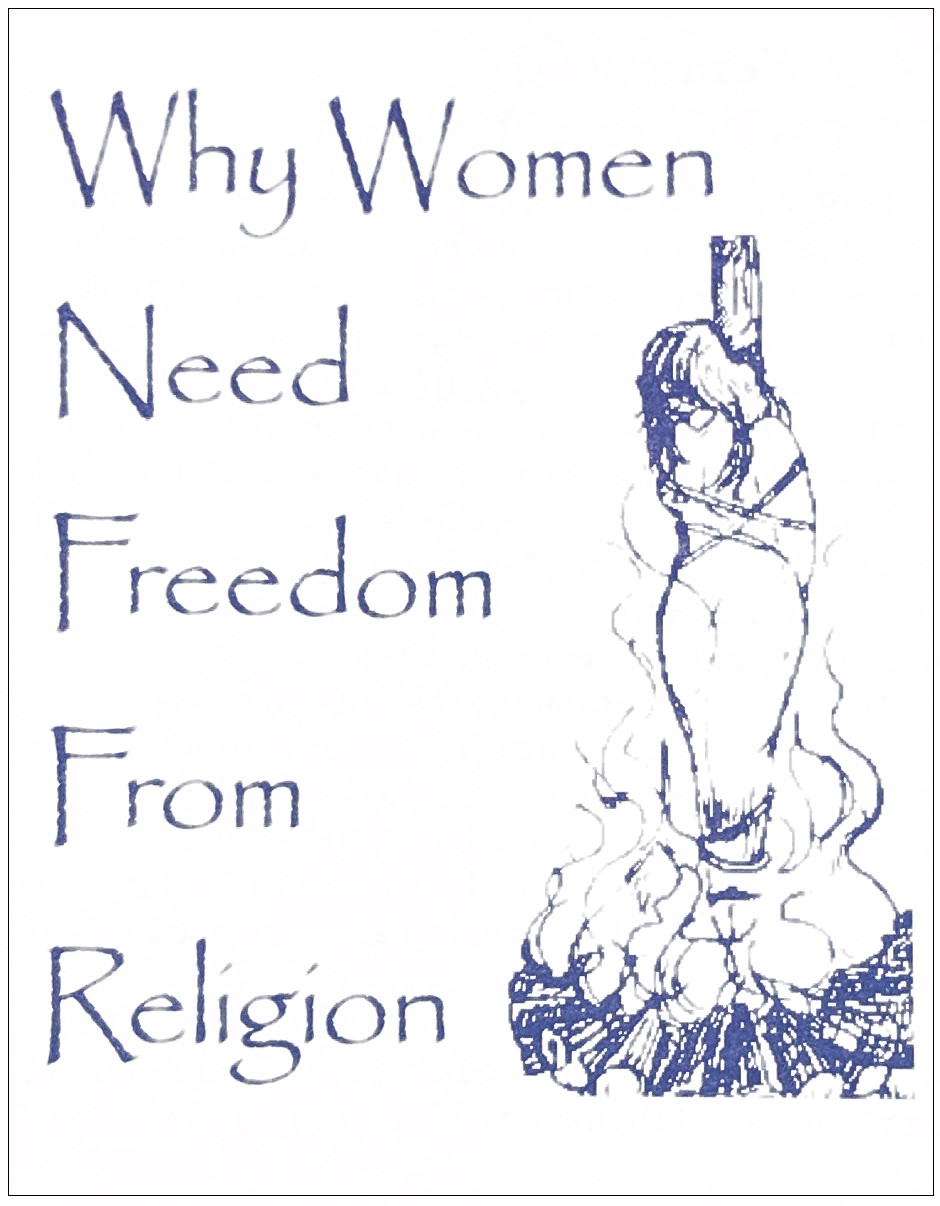 Organized religion always has been and remains the greatest enemy of women's rights. In the Christian-dominated Western world, two bible verses in particular sum up the position of women:

"I will greatly multiply thy sorrow and thy conception; in sorrow thou shalt bring forth children; and thy desire shall be to thy husband, and he shall rule over thee." By this third chapter of Genesis, woman lost her rights, her standing—even her identity, and motherhood became a God-inflicted curse degrading her status in the world.

In the New Testament, the bible decrees:

"Let the woman learn in silence with all subjection. But I suffer not a woman to teach, nor to usurp authority over the man, but to be in silence. For Adam was first formed, then Eve. And Adam was not deceived, but the woman being deceived was in the transgression." 1 Tim. 2:11-14

One bible verse alone, "Thou shalt not suffer a witch to live" (Exodus 22:18) is responsible for the death of tens of thousands, if not millions, of women. Do women and those who care about them need further evidence of the great harm of Christianity, predicated as it has been on these and similar teachings about women?

Church writer Tertullian said "each of you women is an Eve . . . You are the gate of Hell, you are the temptress of the forbidden tree; you are the first deserter of the divine law."

Martin Luther decreed: "If a woman grows weary and at last dies from childbearing, it matters not. Let her die from bearing, she is there to do it."

Such teachings prompted 19th-century feminist Elizabeth Cady Stanton to write: "The Bible and the Church have been the greatest stumbling blocks in the way of woman's emancipation."

The various Christian churches fought tooth and nail against the advancement of women, opposing everything from women's right to speak in public, to the use of anesthesia in childbirth (since the bible says women must suffer in childbirth) and woman's suffrage. Today the most organized and formidable opponent of women's social, economic and sexual rights remains organized religion. Religionists defeated the Equal Rights Amendment. Religious fanatics and bullies are currently engaged in an outright war of terrorism and harassment against women who have abortions and the medical staff which serves them. Those seeking to challenge inequities and advance the status of women today are fighting a massive coalition of fundamentalist Protestant and Catholic churches and religious groups mobilized to fight women's rights, gay rights, and secular government.

Why do women remain second-class citizens? Why is there a religion-fostered war against women's rights? Because the bible is a handbook for the subjugation of women. The bible establishes woman's inferior status, her "uncleanliness," her transgressions, and God-ordained master/servant relationship to man. Biblical women are possessions: fathers own them, sell them into bondage, even sacrifice them. The bible sanctions rape during wartime and in other contexts. Wives are subject to Mosaic-law sanctioned "bedchecks" as brides, and male jealousy fits and no-notice divorce as wives. The most typical biblical labels of women are "harlot" and "whore." They are described as having evil, even satanic powers of allurement. Contempt for women's bodies and reproductive capacity is a bedrock of the bible. The few role models offered are stereotyped, conventional and inadequate, with bible heroines admired for obedience and battle spirit. Jesus scorns his own mother, refusing to bless her, and issues dire warnings about the fate of pregnant and nursing women.

There are more than 200 bible verses that specifically belittle and demean women. Here are just a few:

Why should women—and the men who honor women—respect and support religions which preach women's submission, which make women's subjugation a cornerstone of their theology? When attempts are made to base laws on the bible, women must beware. The constitutional principle of separation between church and state is the only sure barrier standing between women and the bible.

For more information about the treatment of women in the bible, read the books Woe to the Women: The Bible Tells Me So and Women Without Superstition: No Gods-No Masters by Annie Laurie Gaylor and The Born Again Skeptic's Guide to the Bible by Ruth Hurmence Green (each available from the address below). Join the Freedom From Religion Foundation to help educate about the root cause of women's oppression, and to enforce the absolute seperation of church and state. Send your $40, tax-deductible memebership to Freedom From Religion Foundation, P.O. Box 750, Madison WI 53701.

This material may not be reprinted without the express written permission of the Freedom From Religion Foundation. All nontracts are available for purchase for a small fee, which allows FFRF to recoup its printing costs.