‘Emperor’ recipient Mendez: ‘Do not bow your heads’ - By Juan Mendez 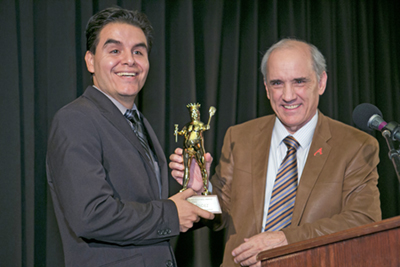 Arizona state Rep. Juan Mendez, D-Tempe, caused a stir nationwide May 21 with his godless invocation opening a legislative session. This is his speech, edited for print, in acceptance of FFRF’s Emperor Has No Clothes Award at the 36th national convention in September in Madison, Wis. The FFRF award is reserved for public figures who make known their dissent from religion

First, I want to thank Freedom From Religion for its work in promoting the constitutional principle of separation of state and church and in educating the public on matters relating to nontheism.

I am honored to accept the Emperor Has No Clothes Award and join past recipients in telling it as it is when it comes to religion. I would like to take this opportunity to share with you all, the story of how I got quoted in the same article as the pope. I need to share this story with you because as defenders of freedom from religion, you deserve a firsthand account of what I can only describe as a culture of corruption.

I believe any prayer before public meetings becomes a litmus test that bars you from the norm, or at worst there’s the fear that if you don’t pass for the norm, your legislation will not be entertained or taken seriously. You can feel it in the indignation they presume and in the fear my colleagues have in losing legitimacy.

Prayer before public meetings ends up becoming a vehicle to deliver a politicized message demonizing and marginalizing entire groups of people. Despite efforts to rotate speakers of different faiths, the practice remains divisive and exclusionary for many who practice less common religions or no religion at all.

Removal of prayer before public meetings poses no threat to the secular nature of our government or society. Only those who gain their cultural capital through proselytizing on our government’s dime are fighting for this. And they are determined on preserving their “heritage,” or cultural capital, at the expense of democracy.

On the floor of the Arizona Legislature, I asked a body of publicly elected officials to forgo the assumed customs of a larger culture and not bow their heads [see sidebar]. I simply asked that they take one moment out of their day, that they look past the fact that we’ve spent months cooped up in a room that should have fit all our egos comfortably, engaged in challenging debates, with many moments of tension, of ideological division, of frustration.

I outed myself — my humanist understandings, my absence of a faith in a deity — at the risk of political capital simply by omitting a God from a simple yet compassionate, if I might say, invocation or prayer. I quoted Carl Sagan: “For small creatures such as we, the vastness is bearable only through love.”

I asked a room full of politicians, the majority conservative, to acknowledge our shared capacity for reason and compassion, our shared love for the people of our state, for our Constitution and for our democracy. And that we root our policymaking in these values that are relevant to all Arizonans, regardless of religious belief or nonbelief.

Fallout the next day

The next day, a colleague seated next to me, for the first order of business after reciting our allegiance and offering the prayer (but before condemning Obamacare, which is how we traditionally begin our political business), called for a “redo” of yesterday’s prayer, my prayer. And they did it.

I had offended him and his religion because my invocation did not invoke his god. Or to put it in more politically correct terms, I didn’t use empty, nondescript language. I chose to stand out.

That’s the parallel I’m honored to share with the “Emperor” short story by Hans Christian Andersen. The moral, as I see it, is don’t seek to blend in with everyone else. Don’t adhere to the empty attempts at misrepresenting your values to engage in your community or to engage in the public trust as publicly elected officials.

If prayer before any public meeting has anyone choosing to blend in and agree that they are doing good work while hiding their lack of faith, we’d be saying that the 20% of the population we represent isn’t worthy of the public trust.

Having politicians fear expressing their lack of beliefs only perpetuates the culture that keeps so many of us from coming out of the closet. If we continue to allow for a cultural practice like prayer before public meetings, we’ll continue to allow millions of Americans to feel disenfranchised from civic engagement because they don’t see their values articulated by their government representatives, community leaders, neighbors and friends.

At the very least, we need to be finished with prayer before public meetings so that the people who approach a governing body or official feel equal. Neutrality on certain issues is vital to the government process.

The First Amendment grants even politicians the right to free speech. I know because I have a line of tea party activists ready to quote the Bill of Rights to me when I get back home.

But across the country, courts have issued differing decisions on what is acceptable, starting with a 1983 Supreme Court decision [Marsh v. Chambers] that approved prayer before legislative meetings. They did this while also setting no boundaries, and courts have since disagreed on the specifics.

A 2008 appellate decision that applies to Florida, Georgia and Alabama upheld prayers at the Cobb County, Ga., Commission, which invited representatives of various faiths to participate. The prayers were predominantly Christian and often referenced Jesus.

A 2011 ruling says that prayers before legislative meetings in Maryland, North Carolina, South Carolina, Virginia and West Virginia should be nondenominational and nonsectarian, using generic words that don’t refer to a specific religion.

Now the Supreme Court is set to hear this term a New York case to determine whether prayer should be permissible at government meetings. A decision in Town of Greece v. Galloway is expected by June 2014.

From my experiences, we need to move away from issues of free speech to issues of equal protection, or more specifically to the No Religious Test Clause of the Constitution, Article VI, paragraph 3: “[N]o religious test shall ever be required as a qualification to any office or public trust under the United States.”

While prayer at public meetings isn’t administered as a test, my colleagues seemed to think I failed. And when they as the majority find their way into leadership positions where they have total control over the entire agenda, deciding what we talk about, when we talk about it and who gets to talk (and then determining whether any action comes from all our talking), I have to fear whether they see me as qualified to carry out the public trust.

That is the culture of corruption in which I was elected to do business. I knew about this before I got elected, so you don’t have to worry about me becoming jaded.

I want to end with the explanation of a quote I turned up awhile ago: “A person can never hope to be more than he is if he is not first honest about what he isn’t.” It probably has nothing to do with religion, but I take it seriously nonetheless and apply it when I can.

I am an atheist because I’ve found no faith in any deity from Thor to Zeus. I am so grateful for the work the people in this room have done to advance the separation of state and church, to educate communities, to build a culture that made it possible for me, as a state legislator from Arizona, to talk honestly about what I do and don’t believe in.

Together, we are in a position to go further than we ever imagined. We are standing at a moment in history where we truly can dramatically shift our culture toward feminism, environmentalism, human dignity and real liberty and justice for all by electing or reelecting more openminded legislators across our country. We even have a PAC now.