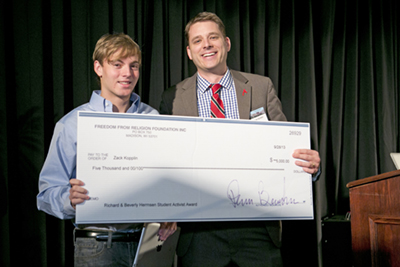 Zack Kopplin, 20, received FFRF’s first Richard and Beverly Hermsen Student Activist Award of $5,000 for his impressive work to repeal a stealth creationism law in Louisiana. This is his acceptance speech, edited for print, given at FFRF’s 36th national convention in September in Madison, Wis. He’s now a history major at Rice University in Houston.

Thank you all so much for having me here so I can tell you about the fight for science in Louisiana and in the United States. My home state, Louisiana, is addicted to creationism.

In 1987, the Supreme Court threw out Louisiana’s first creationism law in the Edwards v. Aguillard decision, but the creationists never give up. When we passed the misnamed and misguided Louisiana Science Education Act back in 2008, we became repeat offenders. I won’t lie. It was really a pretty clever piece of legislation.

The act never once mentions creationism or intelligent design in order to dodge court rulings like Edwards, which said Louisiana cannot require that creationism be taught in public school science class, or the more recent 2005 case, Dover v. Kitzmiller, in which Judge John Jones ruled that intelligent design was creationism, too, just all dressed up in a lab coat and therefore still patently unconstitutional.

Instead, the law allows and encourages teachers to use supplemental materials that “critique” evolution and other political controversies, including climate change and cloning. The overwhelming majority of scientists support evolution theory. This is only a controversy to Louisiana politicians.

But, because of this law, in our public school science classes, teachers can bring in materials that say the Earth is only thousands of years old. Throughout the bill and the talking points of proponents are references to the importance of teaching critical thinking.

When he first introduced the bill, Sen. Ben Nevers let the cat out of the bag, explaining that a creationist group, the Louisiana Family Forum (which, by the way, claims to have drafted and promoted the LSEA) asked for the law so creationism could be taught in public schools.

“I’ve got no problem if a school board, a local school board, says we want to teach our kids about creationism, that some people have these beliefs as well,” Gov. Bobby Jindal told NBC’s “Education Nation.”

When the state Board of Education originally wrote the rules implementing the LSEA, they specifically outlawed teaching creationism and intelligent design. The creationists went berserk and had those rules scrapped. The Livingston and Tangipahoa Parish boards went so far as to use the law to justify making creationism a mandatory part of the curriculum.  This isn’t just a Louisiana issue, though. Attacks on science come from all around the country, and the damage from science denial falls on all Americans. A prime example is Texas, which is currently adopting new science textbooks. And because it’s Texas, creationists are attempting to undermine these biology books.

The state board has appointed “expert reviewers” to issue corrections to the textbook publishers. The issue is these experts are not experts. They’re Discovery Institute fellows and members of the Creation Science Hall of Fame.

They have sent reviews to the textbook publishers, insisting they revise their books to say there are no transitional fossils and to include the “creation model” based on “biblical principles.”

When I was a senior in high school, I realized I had a voice and a moral responsibility to use it and started a campaign to repeal the Louisiana Science Education Act. The first thing I did was contact Dr. Barbara Forrest, one of the country’s foremost leaders in fighting creationism. She happens to live just 25 miles down the road in one of our creationist hot spots, Livingston Parish.

We met and started working on the repeal. The first step was to find a legislator courageous enough to sponsor the repeal bill. The LSEA passed with only three votes against it.

I met with Sen. Karen Carter Peterson, one of the brave three, and she agreed to author the repeal legislation. Rep. Walt Leger agreed to handle our legislation when it got to the House.

When this campaign began, everyone told me that we didn’t have a chance, that we were taking on powerful interests and it wasn’t worth it.  Our first repeal bill was defeated 5-1 in committee. We came back for a second try the next year and lost again. This year we lost again in a 3-2 vote but made progress and will be back again next spring.  And we’ve done some incredible things along the way. We protected Louisiana’s biology textbooks and now defeated four attempts to throw them out.

Nearly 40% of living Nobel laureate scientists have joined us. Major science organizations like the American Association for the Advancement of Science are on board. Public servants, including the full New Orleans City Council, and tens of thousands of others, have joined our cause.

Despite our progress, our issues have taken a new turn for the worse. It seemed like Governor Jindal had already done as much damage as he could to science education with the LSEA. Wrong.

The state has now passed a program that takes money from public schools and gives vouchers to creationist schools. The program has been ruled unconstitutional, but the Legislature could find a way around it.

I documented 20 private schools which blatantly teach creationism or use creationist curricula that could end up receiving over 1,300 voucher slots, which were initially slated to receive $11 million in taxpayer funds annually. They’ve since decreased the amount to about $4 million. If they manage to keep the program going, they’re going to be funding millions more.

I found schools that teach “Our position on the age of the Earth and other issues is that any theory that goes against God’s Word is in error” and others that call scientists “sinful men.” I found a school that requires students to “defend creationism through evidence presented by the Bible versus traditional scientific theory.”

Mother Jones magazine picked out the 14th craziest lessons taught in creationist schools. My favorite was the textbook that claimed dragons were real (they were dinosaurs with chemicals in their noses, and they lived with humans).

By the way, one of our state legislators who voted for the voucher program now says she opposes it because she didn’t realize Muslim schools could potentially qualify for vouchers. She thought religious schools meant only Christian schools, and for good reason. Besides all the creationism and dragons, there’s even a school slated to receive $360,000 a year led by a man who calls himself The Apostle and teaches prophecy.

As the New Orleans Times Picayune opined, “Vouchers have turned out to be the answer to a creationist’s prayer.”

We’re giving public money to private schools that will fail our students through teaching creationism and bad science. But again, all of you know that this isn’t just Louisiana craziness.

I’ve found that over 300 schools across the country are teaching creationism and receiving tens of millions or quite possibly even hundreds of millions in public money. I found schools bringing students to the Creation Museum and calling evolution “the way of the heathen.”

This fight may be long and it may be hard, but as President Kennedy said when he launched the moon mission, “We choose to go to the moon in this decade and do the other things, not because they are easy, but because they are hard, because that goal will serve to organize and measure the best of our energies and skills, because that challenge is one that we are willing to accept, one we are unwilling to postpone, and one which we intend to win.”

We need a new science revolution because our generation faces unprecedented challenges to our way of living and to our survival as a species. Our population continues to climb, but the amount of clean water and living space we have is stretched thin. Our climate is growing increasingly extreme. We’ve discovered “super bugs” which are resistant to antibiotics.

Earth is experiencing a rapid decline in biodiversity, especially in our oceans. The recent meteorite that exploded over Russia is a sobering reminder that we could be faced with a killer asteroid in the near future.

I know these threats sound like science fiction, but they are real and my generation will have to address them. The way to overcome these challenges and ensure the continued long-term existence of our species is through investment in rapid scientific innovation.

We have a choice of two futures. In the first, we keep on our present track. This is a future where science funding continues to stay stagnant or decline. In this future, we teach creationism and climate denial instead of science. In this future, we fall to these threats.

I have a vision where we invest $1 trillion in science in the next decade. Science funding offers a massive return on investment, over 30%. And the great thing about funding science is that what we discover, unlike a tax cut, never sunsets. Unlike a road, it never needs to be replaced or repaved. What we discover will be with us forever.

I have a vision where we teach evolution, not creationism. Where we teaching about radio carbon dating rather than Noah’s flood. Teach climate science, not just plain denial science.

I have a vision of humanity harnessing wave energy and revolutionary sustainable technology like algae fuel. I have a vision where we discover how to turn off cancer cells and even aging.

We have the power to launch a scientific revolution to overcome the challenges we face and we all have a responsibility to do that.

This is our generation’s movement. We need a Second Giant Leap for humankind!