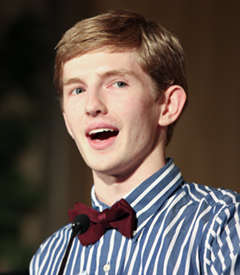 Hello, everyone. It’s really great to be among such admirable and wonderful people. Don’t you feel that energy when we’re all in the room together? We’d like to thank Annie Laurie and Dan and all the people at FFRF because, even though we provide a little financial help, they’re the ones who have to talk with Sean Hannity and take a shower afterward. They’re doing all the hard work.

Max Nielson is a pretty amazing person. He’s not only a black belt in karate and an Eagle Scout, he’s earned the equivalent of an international high school diploma. He’s won not one but two board of director seats for secular coalition groups in the Carolinas area, and he’s also the founder and president of the Secular Student Alliance group at his college, the College of Charleston.

He also told me he’s an amateur contortionist. He’s going to turn himself into a human pretzel up on the stage here — or maybe not. He’ll tell you all about his saga with trying to get the school graduation prayer stopped, and how this has been a really transformative event in his life. So will you please welcome, Max Nielson. — Len Eisenberg

Hi Mom. That’s Mom [in audience]. She’s great. So, like they said, I’m Max Nielson. I grew up in South Carolina for the most part.

I was born in Atlanta, moved away when I was 4. Canadian father, rural South Carolinian mother, and so if I say, you know, the “sooth,” or “oot and aboot,” feel free to laugh, just laugh, it’s very comic.

Growing up in South Carolina, you might not think it, but I had a really secular upbringing. I attended the Unitarian Universalist congregation of Columbia. Many times, the pastor when I was going was regularly Mister Reverend Patrick, or something like that. He was a pagan. It wasn’t this idea that “Oh, there’s one true religion.” That was never really introduced to me in any solid way.

As I was going through school, I encountered a lot of people who were very fundamentally religious — like the kind of a goofball kid in seventh grade who rejected the science lesson because he knew Earth was 6,000 years old. And I was like “Weird! What are you doing?!”

That kind of got me interested, so I started studying counter-apologetics through middle school, and that was fun. I really enjoyed getting to rationalize things that were not rational.

Another big part of my youth was Boy Scouts of America. I stayed in the closet long enough to get the Eagle Scout. That was good, but kind of ironic. My entire troop knew I was an atheist, but they went ahead and made me chaplain’s aide. So, yeah, I can sympathize with Dan, I’ve led a few prayers, too.

High school was great. No it wasn’t. But in ninth grade I was in Irmo, South Carolina, and the Pastafarians at USC just brought in a pretty amazing speaker, Richard Dawkins. I got to see him in ninth grade, and I was young and didn’t know anything. I kind of formulated this idea, like “Oh hey, I should probably be a scientist, so that I can help humanity.”  Another thing that happened early in high school is someone wanted to form a Gay-Straight Alliance, and the principal resigned over it. He walked out. He retired early because he didn’t want to be the principal at a school with a Gay-Straight Alliance. That was also weird.

Later in high school, I got into the international baccalaureate program. It’s a smaller program at most high schools, and especially mine, so I was around 30 of my really close friends, and in the classroom, day to day, religion just stopped being a topic. I was that mildly articulate atheist kid who would shoot down your argument, and that was fun, but it never came up

After I qualified for the international baccalaureate diploma, I was pretty much the paragon of post-high school apathy. I did not care about anything, and it was fantastic! But 10 days before graduation [at which Christian prayer would be recited because a majority of seniors voted to have prayer], my good friend Kelly Freeman linked me to an interview with Harrison Hopkins on a podcast called “A Matter of Doubt.”

He challenged almost the exact same policy at his high school in Lawrence County, S.C. It was 10 days before graduation, but I knew I had to do something, because I could do something, and that made all the difference. Kelly walked me through it.

She basically pointed me at the most important button on any activist website ever: Contact Us. So I did, and FFRF got back to me very fast, either that same day or the next day. Through that, I scheduled meetings through the principal, and FFRF sent legal letters to the school district to back me up.

Right about this time, my mom comes home from school. She’s a teacher at that school. Yeah, she’s been teaching English at Irmo High School for seven years. So, she gets into the computer room, and I’m just covered in sweat, out of my mind, deliriously excited that I can fight injustice as I saw it. She can tell I’m visibly disturbed, and I lock eyes with her, and I’m, “Mom — can I stir shit up?”

And she’s like, “Yeah, go ahead,” which was amazing. She had my back, she was with me. She had always felt uncomfortable with the public prayers they had at graduation.

I met twice with my principal, Mr. Weinkle. The first time, he just wanted to make sure I wasn’t crazy. He made this really bizarre reference, looking down and holding his belt, “I’m from a town in North Carolina. I totally see where you’re coming from with this, it’s a pretty a metropolitan area, but I can’t help you because this is the bible belt.” That was shocking.

It seemed like he understood the issue. He understood why it was wrong but still wasn’t willing to help because of where we were [in the bible belt]. To me, that just wasn’t acceptable. So I contacted the superintendent and FFRF got me an amazing lawyer, Aaron Kozloski. It was great to have Aaron on the case; he’s a brilliant guy. It’s been really fun working with him.

The second time I met with my principal, he handed me the district policy. What it basically said was they could have prayer if it was nonsectarian and nonproselytizing. Nonproselytizing pub-
lic prayer, folks; you heard it here first.

Leading up to meeting with my superintendent, I knew that if I walked in as one voice, I would probably be dismissed as one voice, because that’s what tends to happen. So I got pretty busy.

In one night, I talked to 150 people online — friends, strangers, people who were my friends on Facebook, it didn’t matter. I heard some strange things, but every single person I talked to supported my actions. They all trusted me enough as a person, and understood the issue well enough to see that what the school was doing, even if they agreed with it, wasn’t constitutionally sound.

I met with Steven Friedman, who had pushed the issue of starting a Gay-Straight Alliance at Irmo High School that caused Mr. Walker to walk out. I sat down with him at a coffee shop, and we wrote a nice little letter to [Superintendent] Stephen Hefner.

When I walked into Mr. Hefner’s office, I gave him the letter. Mr. Kozloski was also there. It was a productive, friendly meeting. Mr. Hefner said he’d get back to me later that day. And so, I received this famously quotable email:

“While I am a staunch supporter of separation of church and state, I do not believe that freedom of religion should be interpreted as freedom from religion within public schools.”

That’s one hell of a proposition. The next day was graduation, and I walked across, and they prayed, and I didn’t remove my cap, and I did lock eyes with the superintendent.

A lot of news interviews followed, and from what I’ve heard, the comments got nasty. The only one particularly scary kind of event or comment was online, someone who posted my home address and cell phone number.

That was sandwiched between two mildly aggressive people blurting out anger at me. So, as Len said, I do have black belt in karate, and I was walking around the house with my bow staff like “I’m not going die today.”

I was pretty convinced I was going to live. Nothing happened, of course, so I was fine. What was so weird and crazy to me about my case was that the moment it was a story, so much support came out of nowhere — the community, the national atheist community, FFRF, Friendly Atheist, Secular Student Alliance, Center for Inquiry.

I had no idea any of this existed, and they were all within an instant surrounding me in support and compassion and reason, and it felt amazing because on no level of this issue was I, the kid, doing the terrible thing. I was the person standing up, and everyone saw that, and it was great.

Most recently, we’ve had the North Carolina Student Secular Summit, which is a terribly long name, and it was great. It was supported by the Triangle Freethought group, which I believe is an FFRF group, right? Yes.

In this lawsuit, to maintain legal standing [because he’d graduated], I had to get two co-plaintiffs, two good friends of mine. Dakota McMillan, one of them, just this past week, I believe, started the Secular Student Alliance at Irmo High School, the 400th SSA affiliate.

The final point I’d like to make: I feel like, maybe, that bible belt Mr. Weinkle was referencing is starting to get unbuckled. And I think we in the freethought movement throw around the term a lot when we’re talking about the South. From what I’ve seen, using that term did nothing but support the Religious Right’s claim in my case.

Matthew “Max” Nielson is principal plaintiff in FFRF’s federal lawsuit against School District 5 of Lexington and Richland Counties, S.C. Jacob Zupon and Dakota McMillan are co-plaintiffs who will graduate respectively from Irmo High School in 2013 and 2014, keeping the lawsuit ripe. A district policy titled “School Ceremonies and Observations” sets guidelines for benedictions and invocations at graduations and athletic events: Use of prayer “will be determined by a majority vote of the graduating senior class with the advice and counsel of the principal.”

The prayer, written by the district but delivered by a student “volunteer,” was addressed to “Father” and asked for the “Lord’s guidance, protection and mercy,” asked students to be “touched” by “the Lord,” to be led “on the path you intend for their lives to lead” and thanked a deity for “the teachers, parents and administrators that were here through our 12 years of school.”