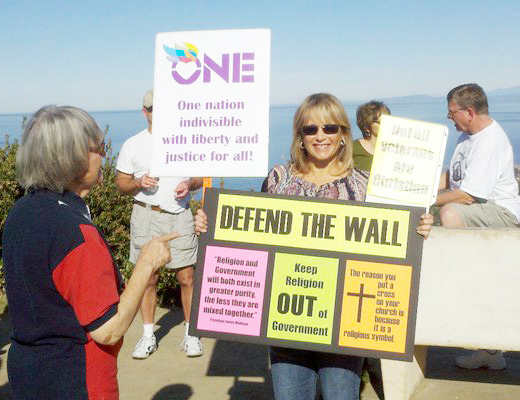 Name: Debbie Allen.
Where I live: Downtown San Diego. More specifically, on the 27th floor of a high-rise with a view of the ocean to the west, mountains to the east and Mexico to the south. I feel like I live in a treehouse with a bird’s eye view of the jungle!
Where and when I was born: San Diego, 1956. On my mother’s side, my great-great grandfather moved here in 1902 to work at the lighthouse on Point Loma. On my father’s side, my great-grandparents moved from Boone, Iowa, to start a business.
Family: I’m married to a loving and patient man who enthusiastically (and financially) supports my volunteer work in the freethought movement. I never had children of my own, but have several wonderful nieces and nephews whom I love to pamper.
Education: Humboldt State University, B.A.; UC-Santa Barbara, educational psychology M.A.; doctoral work (all but dissertation) in clinical psychology at the California School of Professional Psychology. I also studied abroad one year in Macedonia when it was part of Yugoslavia. This was a life-altering opportunity to broaden my knowledge of another culture, society and political system.
Occupation: Psychotherapist and clinical researcher in neuropsychology, now retired.
Military service: None, but I finally established the first-ever meeting of humanists on a military base in San Diego. We met Jan. 13 at Marine Corps Air Station Miramar.
How I got where I am today: I’ve always been the kind of person who wants to be involved — in student government, music groups, volunteering for causes and organizations. I’ve also been relatively progressive and concerned about civil rights and human rights.
I converted to Reform Judaism, as an atheist, in my 30s. This was inspired by a desire to be part of a community actively working for social justice. I served two terms on the board of directors of my synagogue. While becoming more involved in leadership positions in the Jewish community, I was also becoming acquainted with various atheist, humanist and secular organizations and joined them all. I’ve been director of the San Diego Coalition of Reason since 2009 and also head two other local chapters of national humanist groups.
Where I’m headed: I’d like to be hired as executive director of a U.S. freethought organization.
Person in history I admire: Susan B. Anthony for her devotion to several causes that have, in every instance, advanced civilization and changed millions of lives for the better.
A quotation I like: I have two. “Cautious, careful people, always casting about to preserve their reputation and social standing, never can bring about a reform. Those who are really in earnest must be willing to be anything or nothing in the world’s estimation, and publicly and privately, in season and out, avow their sympathy with despised and persecuted ideas and their advocates, and bear the consequences.” (Susan B. Anthony)
“With all due respect, then, to the metaphysicians and religious idealists, philosophers, politicians, or poets: The idea of God implies the abdication of human reason and justice; it is the most decisive negation of human liberty, and necessarily ends in the enslavement of mankind, both in theory and practice.” (Michael Bakunin)
These are a few of my favorite things: The beach, reading, dancing, the Beatles, Motown, R&B, films, my iPad.
These are not: People who promise to do something, then disappear.
My doubts about religion started: Early in elementary school. I remember lying in bed wondering, “If god created the world, who created god?” By the time I was in eighth grade, I was a self-identified atheist.
Why I’m a freethinker: Because I love to learn about the world by applying reason, logic and the scientific method. I am determined that “Truth” should not be determined by authority, tradition or other dogmas.
Ways I promote freethought: Through my leadership positions in secular groups mentioned above. I’m a certified humanist chaplain, organizer of the Recovering From Religion meetup, atheist blogger and leader of a task force to create a San Diego freethought/humanist center.
I never pass up an opportunity to fight for civil rights and scientific literacy. I’m also a passionate atheist who thinks that nonbelievers must become more influential in every aspect of our culture and society.