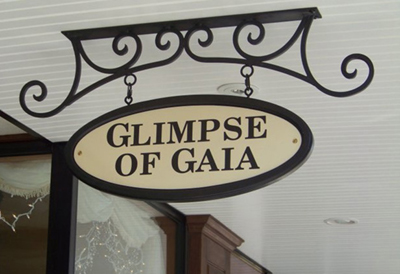 Sean Condon and Stephanie Ewart-Condon operate Glimpse of Gaia, a floral business in Putnam, Conn. When no one else would deliver FFRF’s flower order to Jessica Ahlquist, Glimpse of Gaia

(glimpseofgaia.com/), gladly did. (Gaia is the primordial Earth goddess in Greek mythology.)

Sean Condon said the business received two negative emails and 96 positive ones. He responded to them all. His response to the negative ones:

Thanks for writing. I realize that the Cranston West prayer banner lawsuit and resulting abuse of Jessica Ahlquist has been a heated issue in Rhode Island. I am sure that you respect our Constitution and the laws which prevent discrimination on the basis of race, gender and religion. I understand that you disagree with Ms. Ahlquist’s position on the banner, so I would invite you to perhaps think about it another way.

Imagine that instead of asking to take the banner down, she had asked for a Secular Humanist expression to be put up. Perhaps next, some Islamic students could request a prayer banner that reflects their beliefs. Likewise, Hindu students could ask for something to represent them. Perhaps Evangelicals would want a banner to distinguish from the Catholic message. I am sure you see the problem this creates. I suspect you would agree that we don’t want the walls of our public space littered with competing dogma, all of which would need to be paid for and maintained by those same public institutions. Instead we have private space, including your place of worship, car, home, Facebook and Twitter pages et cetera, which you can use as you like to express your beliefs, whatever they may be.

I would like you to imagine another small change to this situation. Instead of flower delivery being denied, it was something more important. Should this young lady be denied food because of her, legally expressed, opinion? What about housing? How about fuel when her car is close to empty and it’s a frigid evening? What about medical care?

Let’s go one step further and imagine that it is you or your loved one who needs to purchase something, but is denied the opportunity because the seller doesn’t like your beliefs. Is this the kind of society in which you would want to live?

Of course companies can deny service for certain grounds, but not any grounds. A store can refuse to sell products that they know you will use illegally. They can deny service if you are belligerent or intoxicated et cetera. However, they cannot deny you service because they don’t like how you think. This is not just a matter of opinion, it is the law.

Those laws are here to protect us. Our Bill of Rights guarantees fair treatment of everyone, even against the will of the majority. It is a foundational premise of our great country. We have rights. We’ve been incredibly lucky to have been born with those rights, hard won by our forebears. I think we should respect and protect them.

Thanks for your interest and attention. — Sean

It was a simple matter to decide to deliver FFRF’s order, Condon said by email Jan. 22. “We don’t discriminate or give in to intimidation. While we agree with Ms. Ahlquist and FFRF, we would make a delivery for senders and recipients with whom we vehemently disagree. It’s a matter of fairness and decency.”

What is driving people’s anger?

“It is not merely simple bigotry, although this is surely the foundation,” Condon said. “Our public education has, for decades, neglected to effectively teach civics. Our technology makes hurling insults and threats easy while simultaneously insulating the sender from the immediate consequences. Our news media is such that careful assessment is now reserved for niche markets, while cursory examination and irrational self-righteousness are rewarded with higher ratings and bigger paychecks. Our politics are dominated by sound bites and buzzwords, often with the intent to mislead.

“Many of our fellow citizens don’t have the skills they need to temper their emotional response, but instead have it inflamed in a variety of ways. We have a growing gap between those of us who use reason and fact to make decisions and those who employ emotion and opinion. If we hope to improve the situation, we’ll need to be more vocal, but still polite, in opposing the slow degradation of our rights and civil discourse.”

In a Providence Journal online poll Jan. 19 (one vote limit per person), readers weighed in on whom they agree with: