Life in the here and now 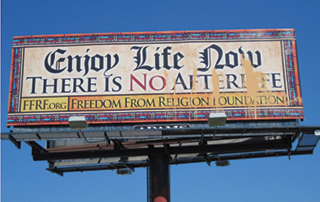 After defacement, the vinyl message was replaced. A $1,000 reward is offered for information on the crime.

As you drive north into Watertown, Wis., on Highway 26 by the John Deere dealership, Wayne Hensler’s philosophy greets you: “Enjoy Life Now. There Is No Afterlife.” The 82-year-old farmer sponsored the billboard (with FFRF’s logistical help) as one of his legacies to his nine grandchildren and six great-grandchildren.

“It’s something that will make people think a little bit, and maybe help them make a little more joy in life. With all these signs, especially the religious ones — God this and Jesus that — this is kind of counteracting that kind of thing,” said Hensler, of rural Waterloo, a city of 3,500 people.

He’s known in Jefferson County as one who marches to a different drummer. In a letter to the editor of his local paper on a nonreligious topic, he mentioned he didn’t “worship ghosts and spirits” but didn’t think that doomed him to eternal suffering.

He thought his letter would cause some chuckles, but all it brought were responses pooh-poohing his nonbelief. “One person wrote that even though I don’t love God, God loves me. I didn’t even mention God.” His brother, and others, told him they think he’s crazy.

Hensler grew up in a religious family in the area. His grandfather, a German immigrant, “got so wound up reading the bible all the time, he actually got to believing he could heal people.” His Lutheran mother always wanted him to sit with her in the front pew but he wouldn’t.

Although he spent two years, from 18 to 20, bedridden due to rheumatic fever, he’s sure no god caused it. He’s still active despite having a pig valve in his heart and a defibrillator. He and his wife, who divorced before she died in a nursing home, had two daughters.

He’s worked hard all his life and has prospered financially while farming and raising livestock and dealing in land, though it hasn’t always been easy. “I don’t know why people go to Las Vegas. If you want to gamble, be a farmer.”

Hensler sometimes asks religious friends if they believe in ghosts. “They say, ‘Oh no!’ Then I ask them why they pray to the father, the son and the holy ghost, and they just look at me.”

Before he saw the actual size of the 10-by-30-foot vinyl sign, he thought about mounting it on a farm wagon as a “lawn ornament” after its six weeks by the highway were up. A barn close to a road might make a better longer-term home for it, he thinks.

About two weeks after it went up, the sign was vandalized. When that happens, the billboard company repairs it for free.

He thinks the key to success in life is good old-fashioned common sense, With a smile, he said he teases people by asking, “Why should I go to church? I don’t want to go to heaven. I don’t want to be with you people. Can’t you get that in your head?

The Foundation’s name is on the billboard but his isn’t. How will people recognize it as his legacy? (Anyone who’d ask that hasn’t lived in a rural community.) “They’ll know who put it up. It’ll get around.”
Hensler’s “unholy” trinity is made up of life, death, and “hoping someone remembers you.  That’s all that life is about. That’s my philosophy anyway.” 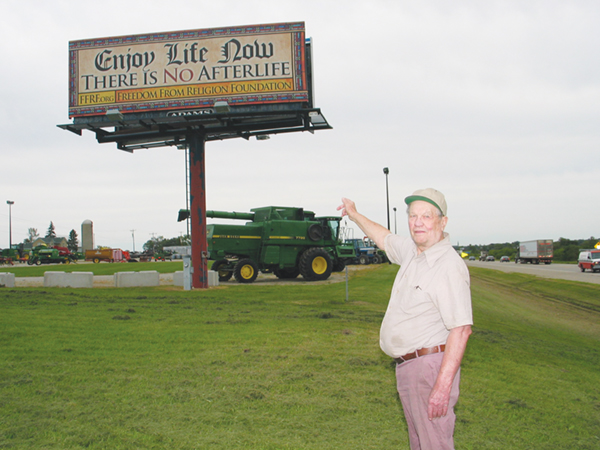 Songwriters Leiber and Stoller might ask “Is That All There Is?” but Wayne Hensler never ever does.